Philadelphia snapped its three-game losing skid last night in San Diego, and now has a great chance at making it two wins in a row with Aaron Nola on the mound. We break down the matchup and MLB betting outlook in our Phillies vs. Padres picks.

The Philadelphia Phillies and San Diego Padres face off in the second contest of a four-game set at Petco Park on Friday night. The Phillies snapped a three-game losing streak with a 6-2 victory against the Friars last night, handing Joe Musgrove his first loss of the season.

Oddsmakers are expecting a close contest with MLB betting lines hitting the board with the Phillies installed as slim -120 road faves before shifting to -130.

Here are our best free Phillies vs. Padres MLB picks and predictions for June 24.

This line opened with the Phillies at -120 with the Over/Under at 7. Early money has come in on the Phillies, moving their line to -130 or -135 depending on the book. The total has stayed at 7.

Aaron Nola (4-4, 3.11 ERA): The 2018 All-Star is looking to make it back to the Midsummer Classic after a terrific start to the season. He leads the NL in WHIP (0.87) while ranking second in innings (89 2-3) and strikeouts (99). The 29-year-old is fresh off a sensational start against the Nationals last Saturday when he pitched eight innings of shutout ball.

MacKenzie Gore (4-3, 3.64 ERA): The rookie is coming off a pair of ugly losses (both against the Rockies), getting shelled for 14 runs on 14 hits and seven walks in 6 1-3 innings. Before those poor performances, the rookie had been lights out to begin the year, pitching to a sizzling 1.50 ERA with a 1.06 WHIP in his first nine starts.

The Phillies are 7-0 in their last seven games against a team with a winning record. Find more MLB betting trends for Phillies vs. Padres

Phillies vs Padres picks and predictions

Both of these clubs have been on fire over the last few weeks, with the Padres going 14-6 in their last 20 games and the Phillies 16-5 in their previous 21. Philadelphia will send veteran right-hander Aaron Nola to the mound tonight.

The Padres will have rookie MacKenzie Gore toeing the rubber. Gore looked dynamite at the start of this season but has struggled in each of his past two starts. While getting shelled for three homers and eight runs at Coors Field last Friday is understandable, surrendering six runs in less than three innings to the Rockies at home two weeks ago is far less excusable.

As great as Gore has looked at times this season, he still ranks in the bottom 20th percentile of pitchers when it comes to hard hit percentage and his xwOBA is middle of the pack.

That's bad news against a Phillies lineup that ranks eighth in the majors in hard hit percentage and is seventh in xwOBA. The Phillies are ninth in the majors with an OPS of .731 and have bumped that number up to .770 against southpaws like Gore.

The Padres have an OPS of .704, although that number is suppressed by the pitcher-friendly confines of Petco Park, and they have a more respectable OPS of .734 on the road.

While both teams have been getting some big hits from their best sluggers, San Diego's Manny Machado and Luke Voit are both listed as questionable for tonight, while Bryce Harper and Kyle Schwarber look poised to continue their red-hot play.

When it comes right down to it, I trust the more experienced Nola a bit more at the moment given his strong play of late and Gore's recent struggles. Take the Phillies.

The total is set at just 7 but that low number makes plenty of sense, despite both of these teams ranking near the top of the majors in runs per game over the last month.

Keep in mind that, while the Friars plate an impressive 5.45 runs per game on the road, that number plummets to just 3.88 at home.

We don't have quite as much faith in the 23-year-old Gore as we do in Nola but we still think he'll likely bounce back from a couple of outlier performances. There's a reason that Gore was one of the best prospects in baseball entering the 2021 season and he had allowed more than two runs just once in his first nine starts.

Prediction: Under 7 (-105 at SportsInteraction)

Perhaps the most impressive part of Aaron Nola's game has been his outstanding control. The right-hander ranks second among all qualified pitchers in the majors in walk rate, walking just 3.2% of all batters he has faced this year.

He's been even better in that area lately. Over Nola's last five starts (where he has faced 138 batters) he has issued just one walk, and that was an intentional pass to Juan Soto.

The Over/Under on Nola's walks today is set at 1.5, a number he has gone below in 12 of 14 starts this year. We're hammering the Under on that prop today. 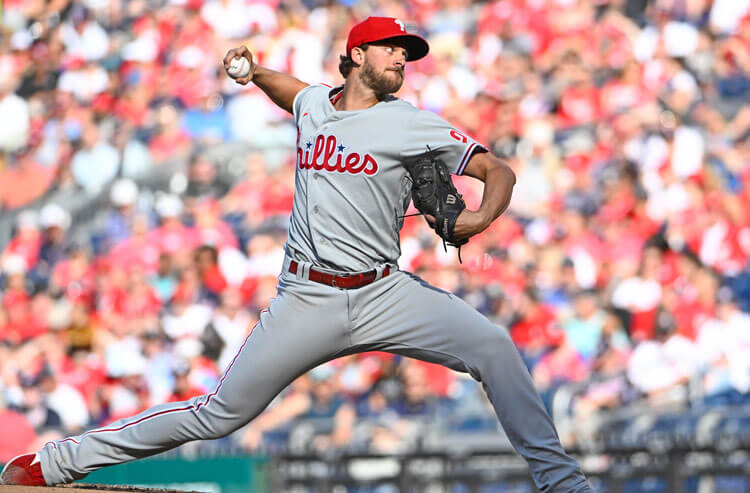