Chicago is one of the worst teams in baseball and has lost 14 of its last 17 games. It won't get easier today, handing the ball to Kyle Hendricks. We highlight the MLB betting value in St. Louis with our Cubs vs. Cardinals picks.

The St. Louis Cardinals host the Chicago Cubs for three games after getting a split with the Brewers to remain tied for first place in the National League Central.

The Cubs have lost three of their last seven and 14 of their last 17. It doesn’t get any easier, as they send struggling pitcher Kyle Hendricks to the mound to try and change their losing ways.

Can the Cardinals keep rolling or will the Cubs even the season series with St. Louis at three games apiece?

Find out with our free MLB betting picks and predictions for Cubs vs. Cardinals on June 24.

Kyle Hendricks (2-6, 5.43 ERA): The 32-year-old right-hander hasn’t gotten past the fifth inning in his last five games and has given up 21 runs on 36 hits in that stretch. In his last start against the Atlanta Braves, he went 4 1-3 innings and gave up six runs, including two homers, on eight hits.

Andre Pallante (2-2, 1.69 ERA): Since moving from the bullpen to the starting rotation on the first of June, the rookie has had three starts, going 1-1 with a 1.80 ERA. In those three outings, Pallante has allowed three earned runs on 12 hits, striking out 10, and walking seven. The 23-year-old’s main weapon is a four-seam fastball that has been clocked regularly at 97 mph. He will also employ a slider and curve to keep batters off balance.

The Cubs are 4-10 in the last 14 meetings against the Cardinals. Find more MLB betting trends for Cubs vs. Cardinals

Cubs vs Cardinals picks and predictions

Hendricks has not been nearly as effective as he was to begin the season and the Cardinals should take advantage of that. The righty has allowed 21 runs in his last five games and now faces a potent Cardinals offense.

This will be the first time Hendricks faces St. Louis this season. He is 12-3 against the Cardinals in his career, though he has lost his last two starts against them.

Hendricks’ main concern will be Paul Goldschmidt and Nolan Arenado. The Cardinals’ 1-2 punch has been brutal on opposing pitchers.

Goldschmidt leads the team in every offensive category. He is first in batting average at .340, which is also second in the majors. He has 88 hits, 17 of which have been home runs. He has 61 RBI, a .423 on-base percentage, and 23 doubles. Against Hendricks in his career, Goldschmidt is 13-41 with nine doubles.

Pallante has been the surprise of the season. The rookie began the year in the bullpen but was promoted to a starter at the beginning of the month. His ERA is second in the majors, though not official because he doesn’t have the minimum number of innings.

Pallante should be able to handle the Cubs, but I do believe he will allow a few runs to Chicago.

The key is Hendricks. He has been disastrous the last month and it wouldn’t be surprising if he hit the Over by himself. The 32-year-old has allowed four or more runs in five of his last nine starts. In his last outing, he allowed six runs on eight hits to the Braves.

The Cardinals have hit the Over five of their last six home games against a right-handed starter. They are also five of six on the Over against a pitcher with a WHIP greater than 1.30. Hendricks has a 1.35 WHIP.

Paul Goldschmidt likes to hit home runs. Hendricks likes to serve up dingers. The two should intersect in Friday’s game.

Goldschmidt has 17 homers on the season and had 10 of them in May but only has six so far this month. His last one came two games ago.

Hendricks gave up two long balls in his last outing against the Braves. Last month, he allowed seven homers.

Hendricks has been having an issue with his control lately, so at +360, this Paul Goldschmidt prop has great value.

Pick: Paul Goldschmidt to hit a home run (+360 at DraftKings) 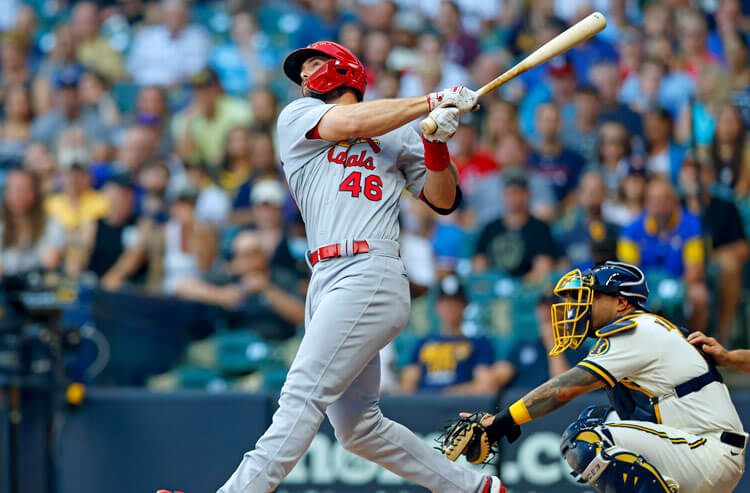