Phillies vs Mets Picks: Big NY Bats Due for Breakout

After the start of this week's series between the Philadelphia Phillies and New York Mets got rained out Monday, we get a pair of seven-inning doubleheaders on Tuesday beginning at 4:10 p.m. ET.

The Phillies have a 6-3 record this season and took two of three games from the Mets last week at Citizen Bank Park. MLB betting lines opened with the Mets as slim -126 favorites in the first matchup today.

Here are our best free Phillies vs. Mets picks and predictions for Game 1 of their doubleheader on Tuesday, April 13.

Chase Anderson (0-1, 3.60 ERA): Anderson gave up a pair of runs on two hits and two walks through five innings in his first start of the year, which happened to be against the Mets. The veteran right-hander had a 2020 season to forget, pitching to a 7.22 ERA with a 1.63 WHIP in 10 games with the Blue Jays.

Taijuan Walker (0-0, 3.00 ERA): Walker made his Mets debut against the Marlins last Thursday, surrendering two runs on four hits and four walks across six innings of work. The 28-year-old also played for the Jays last season, posting a 2.70 ERA with a 1.16 WHIP in 11 starts with Toronto and Seattle.

The Over is 6-0 in the Phillies last six games overall. Find more MLB betting trends for Phillies vs. Mets.

The Mets haven't played since Saturday when they were shut out by the Marlins. Batting issues continue to plague this New York team, despite looking much improved on paper from a year ago.

That said, the Mets have played just five games all season after their first series against the Nationals was canceled due to health concerns, and they have yet to get into their groove.

Offseason acquisition and $341 million dollar man Francisco Lindor has started the season going just 3-for-17 at the plate while second baseman Jeff McNeil is 1-for-13. Given the track record of these two, Lindor slugging at least 32 home runs in every season from 2017 to 2019, and McNeil batting over .310 in each of his first three years in the majors, I expect them to break out sooner rather than later.

The Phillies' Anderson had a decent three-year stretch with the Brewers from 2017 to 2019 but he looked really bad in seven starts with Toronto last year, including one start against the Mets where he surrendered four earned runs before getting "Chased" from the game midway through the third inning.

Walker might not be a world-beater but he looked solid in 2020 and has shown increased velocity this season, three years after undergoing Tommy John surgery. Walker's fastball topped out at 97 mph last Thursday with his average velocity an impressive 95.4 mph.

This is a wager on potential more than anything else but we're backing the more talented team at home.

As part of a doubleheader, this game is scheduled for just seven innings with the total opening at 6.5. Philadelphia is coming off a 7-6 win over the Braves and has cashed the Over in six straight games.

The Phillies ranked seventh in the majors in OPS (.781) and fifth in runs per game (5.10) last season and spent big money to resign All-Star catcher J.T. Realmuto and shortstop Didi Gregorius. Combine those two with powerful sluggers like Bryce Harper and Rhys Hoskins and you have a dangerous lineup with plenty of pop.

We already mentioned the proven ability of Lindor and McNeil for the Mets but Michael Conforto is another big bat who has had success over the last several seasons, though he has also struggled this year.

New York first baseman Pete Alonso is one of the best power hitters around and led the majors with 53 home runs as a rookie in 2019. These Mets bats are simply too good to keep down for too long. With the Mets 5-2 to the Over in their last seven games, take the Over again. 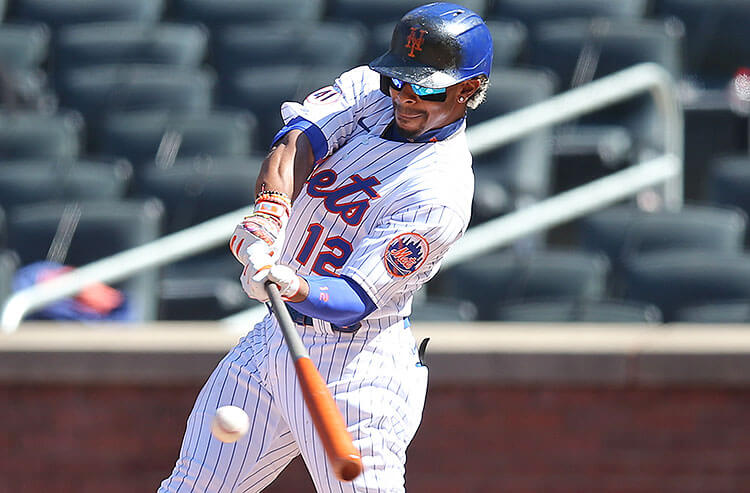 Phillies vs Mets Picks: Big NY Bats Due for Breakout
Provided by