Orioles vs Blue Jays Picks and Predictions: Battle of the Birds Has Major Playoff Implications

The Blue Jays need a victory, and a bit of help, if they want to keep playing in October. They couldn't ask for a better matchup, sitting as massive MLB betting chalk against the AL-worst Orioles, but is there reason to actually back the birds in Game 162?

The MLB betting board has several games with postseason implications this Sunday, including an AL East matchup between the Baltimore Orioles and Toronto Blue Jays.

The Jays need to complete the series sweep against the Orioles — and pray for a loss from the Yankees or Red Sox — if they want to head to an elimination game tomorrow. Toronto opened as a whopping -320 home favorite for this contest with the Over/Under at 10.5.

Here are our best free Blue Jays vs. Orioles picks and predictions for Sunday, October 3, with the first pitch scheduled for 3:07 p.m. ET.

Bruce Zimmermann (4-4, 4.66 ERA): After throwing a total of seven innings last year as a rookie, Zimmermann has logged 63 2-3 innings this season with a 1.45 WHIP and an opponent batting average of .279. He's fresh off a solid performance against Boston, where he held the Red Sox to two hits and one run across four innings.

Hyun Jin Ryu (13-10, 4.39 ERA): Ryu was brought in as a free agent in 2020 to be the Jays ace but after a strong debut campaign he has struggled in the second half of this season. The veteran left-hander has an ERA of 7.13 with a WHIP of 1.42 in 10 starts since the beginning of August. In his last outing, he surrendered six hits and three runs in 4 1-3 innings against the Yankees last Tuesday.

The Over is 4-0-1 in the last five meetings between these divisional rivals. Find more MLB betting trends for Orioles vs. Blue Jays.

The Blue Jays need a victory, and a bit of help, if they want to keep playing in October and they couldn't ask for a better matchup than the Orioles, who have the worst record in the AL at 52-109. The Blue Jays have been one of the best hitting teams in the majors all season, leading the majors with an OPS of .794 and plating 5.18 runs per game.

That said, they'll have Hyun Jin Ryu on the mound tonight and the highly-paid starter has looked awful lately. In his last six starts, Ryu has pitched to a 9.37 ERA with a 1.63 WHIP — a span that includes two poor outings against the Orioles, where he surrendered 10 runs across eight innings.

The Orioles will respond with 26-year-old Bruce Zimmermann, who has pitched to a mediocre 4.66 ERA in eight starts this year and will be facing off against the Jays for the first time in his career. Zimmermann has underwhelming velocity but he has good command and a nasty slider.

This is absolutely a game that the Blue Jays should win but their odds have been a bit wild during this series, with Toronto a -379 favorite on Friday and installed at -281 against Baltimore's top starter John Means yesterday. With Baltimore once again paying out at almost 3/1 on the moneyline — and going up against a struggling starter in Ryu — we're siding with the underdogs.

Led by Vladimir Guerrero Jr., who is slashing .311/.400/.597, the Jays have four sluggers who have driven in more than 100 runs this season. They also have two others who have smacked more than 20 homers and 80 RBI — and that's not even including George Springer, who has missed half of the year with injuries.

From top to bottom, this is one of the most dangerous lineups in the bigs and ranks third in the majors with 5.18 runs per game, with that number increasing to 5.44 at home.

The Orange Birds might not have the same weapons at the plate but they have some good young pieces, including Ryan Mountcastle and Cedric Mullins. Baltimore's batting analytics, including a sweet-spot percentage that ranks 11th in the majors and an average launch angle that ranks 10th, indicate that things should get better.

Ryu is known as a command pitcher so it's especially worrying that his command has been his biggest flaw during this slump with the lefty unable to find his spots.

The Over has gone 4-0-1 in the last five meetings between these AL East foes and the Jays have been absolutely bonkers at the dish, plating at least 10 runs in four of those contests — including a whopping 22 runs on September 12. Expect another high-scoring showdown between these clubs and bet the Over. 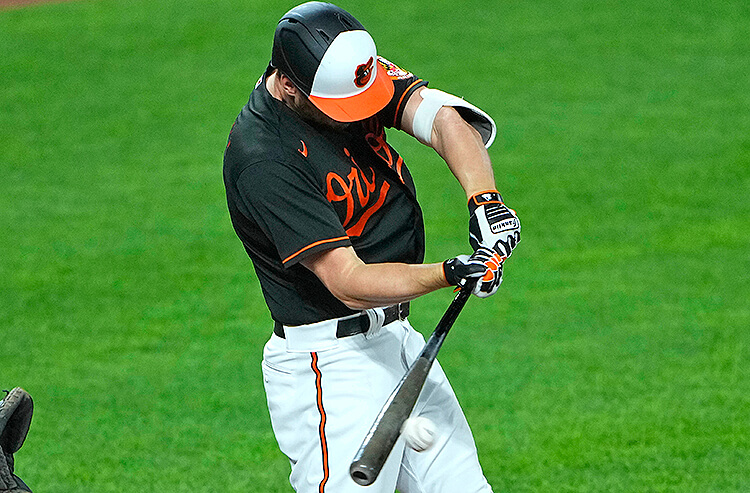 Orioles vs Blue Jays Picks and Predictions: Battle of the Birds Has Major Playoff Implications
Provided by