The MLB season was on the brink of cancellation, but we will have games played in the 2020 season, with the revised Opening Day July 23. The delay to the season means that MLB betting fans will have a condensed 60-game schedule to dive into, with each team playing 40 divisional games and 20 interleague games against their geographical equal.

The Empire was officially back after the Yankees backed up the Brinks truck to sign free agent Gerrit Cole. Before the season was delayed, the projected win total for the Yankees and their loaded roster was already intimidatingly high, but with a 60-game schedule is it still too daunting? We turn our attention to the MLB odds for regular-season win totals and our Andrew Caley slides into the MLB betting odds headfirst and gives his best Over/Under win predictions for the American League East.

I started this column last year by saying it would be hard for the Orioles to repeat a performance as terrible as their 2018 season. But in the end, it was still the Orioles, I took the Under, and the O's did not disappoint.

While Baltimore had seven more wins in 2019 compared to the previous season, which gives them a grand total of 101 wins (and 223 losses) over the last two seasons. There still aren’t significant improvements coming to this roster in 2020: Dylan Bundy is gone and they're hoping Alex Cobb is healthy and John Means can replicate his 2019.

But let's be real: this is still the Orioles, and they're only facing teams from the AL East and a loaded NL East. Banking on them to go Over is a risky proposition.

It's been an interesting offseason for the Red Sox. They're coming off a disappointing 84-win campaign in 2019, then they traded arguably their most popular player since Ted Williams - for a bag of balls - in Mookie Betts, in an apparent “cost-saving” measure. They had to fire manager Alex Cora for his involvement in the Astros’ sign-stealing scandal, and they are still waiting for the results from their own cheating allegations to develop.

That's just the off the field issues. As far as their roster goes, their ace Chris Sale is out for the season following Tommy John surgery in late March, leaving an already-thin rotation in tatters as they currently have Eduardo Rodriguez, Nathan Eovaldi and Martin Perez as the only reliable starters. They still have a solid core of position players with Rafael Devers, Xander Bogaerts, J.D. Martinez and Andrew Benintendi, but it's hard to look at that rotation and not be worried, and that's not a good sign when you'll only be facing offenses such as the Yankees, Phillies, Braves, Blue Jays... and did we mention the Yankees?

On top of all that, the bullpen, beyond Brandon Workman, is shaky at best. Considering all these factors, it’s hard for me to see them surpassing any expectations this year.

Not surprisingly, the Yankees have the highest projected win total in the American League. The Bronx Bombers led the Majors in scoring on their way to 103 wins last year, and have now added one of the best pitchers in the game in Gerrit Cole.

Not only did they win 103 games, but they did so with a ton of key players getting injured. Gary Sanchez, Aaron Judge, Aaron Hicks, Giancarlo Stanton, Miguel Andujar and Luis Severino all missed significant time last season.

While Severino will miss the entirety of this season as well, due to Tommy John surgery, the delay to the season could actually benefit the Yanks, as Stanton and Judge could be healthy (after being expected to miss the original Opening Day) and starter James Paxton should also be recovered from back surgery.

The Yankees enter this revised Spring Training relatively healthy, and motivated as they feel like one of the clubs most directly cheated by the Astros. They're going to score a lot of runs again, their starting pitching is greatly improved and we're only now mentioning their bullpen, which is still the most intimidating in baseball.

Heading into last season I was not a believer of either the Rays or the A’s and their strategy of using just three or four starters and going with openers for much of the season. (For those who don’t know, an opener is a relief pitcher who starts the game, pitches one-to-two innings, then hands it off to the bullpen). I ended up picking the Under for both teams and got burned — not this season.

The Rays return most of their lineup for last season and have added interesting Japanese outfield transfer Yoshitomo Tsutsugo to the mix. Blake Snell and Tyler Glasnow are healthy, Charlie Morton looks to build off a terrific first year in Tampa Bay, the bullpen is still excellent and Kevin Cash is one of the best managers in the game.

The number feels pretty spot on here, but with pitching so important in a shortened season, we’re not getting burned by the Rays again.

The Blue Jays are an intriguing team heading into 2020. They only won 67 games last season, but from June 1 on, they went 36-42, which works out to about 75 wins over a full season (or almost 28 wins in a 60-game season). Of course, this coincides with is when Vladimir Guerrero Jr., Bo Bichette and Cavan Biggio all joined the roster.

The Jays also won as many games as they did with one of the worst rotations in baseball, which they remedied that in a big way. The team made a splash in signing former Dodger Hyun-Jin Ryu, while adding Tanner Roark and Chase Anderson for depth. Top pitching prospect Nate Pearson is also on the cusp of breaking into the big-league rotation, and he can hit 104 mph on the radar gun.

If the Junior Jays can take the next step in their development, they could not only surpass their projected win total, but also a dark horse for some postseason baseball.

This means you can bet the Twins to have more than or less than 38.5 wins. So, 39 or more wins and you cash an Over bet and 38 or fewer wins and your Under is the winner.

Most of these odds are juiced to -110 each way, meaning you would need to bet $110 to win $100. If adjustments are made, due to players changing teams, getting hurt or liability (amount wagered on a certain side), then usually the number would change, for example: the Yankees move from 38.5 to 39.5.

There are many strategies to consider when making an MLB regular-season win total bet. First and foremost, you're looking for value. Has a sportsbook overvalued a player acquisition or undervalued the strength of a division? Just because the Yankees won 103 games last year (the equivalent of just more than 38 wins in a 60-game season), doesn’t necessarily mean they'll go Under their win total of 38.5 this year. With a little bit of research, you can find some real value in the numbers.

Also, consider the length of your investment. As mentioned before, MLB regular season win totals need to be locked in prior to the Opening Day of the MLB season and don’t cash out until the season ends. That’s a long time to wait out a bet. If you are betting the Rays to go Over 33.5 wins, but they stumble out the gates, you’ve got a season-long sweat on your hands.

Finally, shop around. Different sportsbooks will offer slightly different totals. If you like the Blue Jays to improve but don’t love the number at 28.5, maybe another book doesn’t have as big of a liability on Chicago and has a number of 28, or even 27.5.

WHERE CAN I BET ON AL EAST WIN TOTAL ODDS? 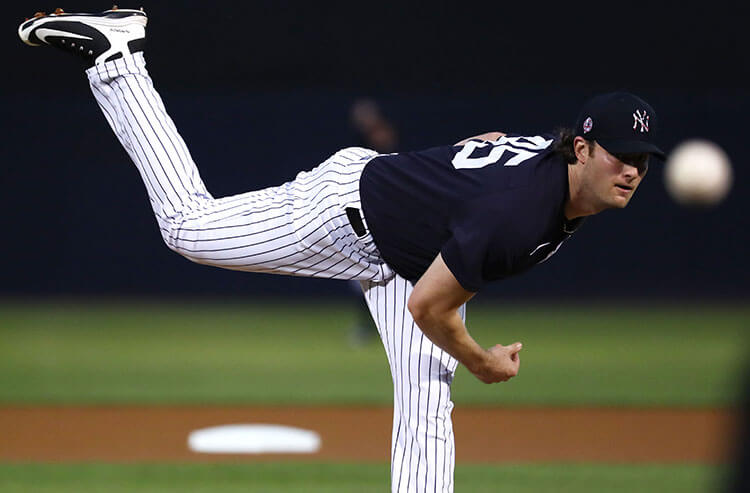 Astros vs Dodgers Picks and Predictions: LA Offense Will Power Dodgers to Win in Scherzer Debut

Indians vs Blue Jays Picks and Predictions: Mejia vs. Matz a Recipe for the Over
About Us
Contact Us
Careers
Our Team
Brand