The Dodgers have enjoyed playing the Mets this month, with five wins against New York already in August. Find out where to find the MLB betting value at Dodger Stadium on Saturday with our picks and predictions.

The Los Angeles Dodgers and New York Mets will play the third game of a four-game set Saturday as the home side has taken the series' first two matches. The two clubs have met five times over the last week with the Dodgers going a perfect 5-0 SU.

These clubs are at opposite sides of the spectrum these days as the Dodgers have ripped off 12 wins in their last 13 and are pushing for the NL West title while the Mets are in freefall and have lost seven of their last eight.

Here are our free picks and predictions for Mets vs. Dodgers for August 21.

Rich Hill (0-0, 4.98 ERA): The transition to the Mets hasn’t been as seamless as Dick Mountain would have liked. Since coming over from the Rays, the veteran right-hander has a 4.98 ERA in five games for the Mets and recorded just 11 outs in his last start. Opposing batters have a .801 OPS vs. Hill since the trade, as his fly-ball percentage is up and his strikeout percentage is down with just 14 punchouts in 21 2-3 innings.

Max Scherzer (10-4, 2.69 ERA): Max Scherzer will face the Mets for a second straight start after picking up a victory last Sunday in a 14-4 L.A. win. Mad Max has made three starts since coming over from the Nationals at the deadline and owns a 2-0 record with a 2.20 ERA, a 0.92 WHIP, and a 23/3 K-BB ratio. He wasn’t at his best and most efficient last week, which is scary for the Mets as he allowed just four hits — no homers — over six innings. Scherzer has a career 2.78 ERA at Dodger Stadium with a 1.07 WHIP.

The Under is 5-0-1 in Dodgers’ last six home games vs. a team with a losing record. Find more MLB betting trends for Mets vs. Dodgers.

The Dodgers are riding one hell of a heater at the perfect time as they sit just a game and a half behind the Giants for the best record in baseball thanks to a 14-3 SU August. Of those 14 wins, five have come against the Mets as L.A. has outscored the slumping club 29 to 13 over those five games. The Mets are basically watching their season slip away from them right at the home stretch.

Scherzer should have ample opportunity to cruise through a lineup that is missing Javier Baez and has scored the sixth-fewest runs in baseball in the second half. They have the league’s 21st-ranked wRC+ and struggle to hit for extra bases, with a .391 SLG percentage that ranks in the bottom five of baseball.

The loaded Dodgers’ offense will get to tee off on 41-year-old pitcher Rich Hill Saturday. Hill was an average pitcher before coming over from the Rays but has yet to find his mediocrity in a Mets’ uniform, as a possible heavy workload is having its effect on him.

The Dodgers’ offense sits in the top-10 in nearly every offensive category for the second half and although it doesn't hit LHP as well as RHP, we doubt Hill will get deep in this game. This should give the Dodgers plenty of time to tack on runs against a Mets’ bullpen who they saw for 15 innings last weekend and scored 12 runs on 15 hits.

Although the Dodgers have had their way with the Mets of late, the games have been relatively close. Two games have gone into extra innings while the first two games in this series finished 3-2 and 4-1. The Under would be 5-1 if it weren’t for some extra-inning runs in the Dodgers’ 6-5 win last Friday.

This total opened at 8.5 but hit 9 shortly after. The Mets have averaged 3.25 runs per game over their last eight contests and have scratched across just three runs through two games in this series. As a team, they are hitting .185 in the series and have managed just a single walk through 18 innings. Scherzer isn’t going to make things any easier on them.

The Dodgers aren't a great LHP-hitting team and sit in the bottom-10 in the league in OPS vs. left-handed pitching. They’re also hitting just .192 in the series and have been profitable to the Under at Dodger Stadium with a 23-29 O/U mark on the season.

Dodger Stadium is playing pretty neutral today, per ballparkpal and with Scherzer keeping things locked down and the Dodgers playing their LHP line-up, we’re tapping the Under today in a game that is huge for both clubs. 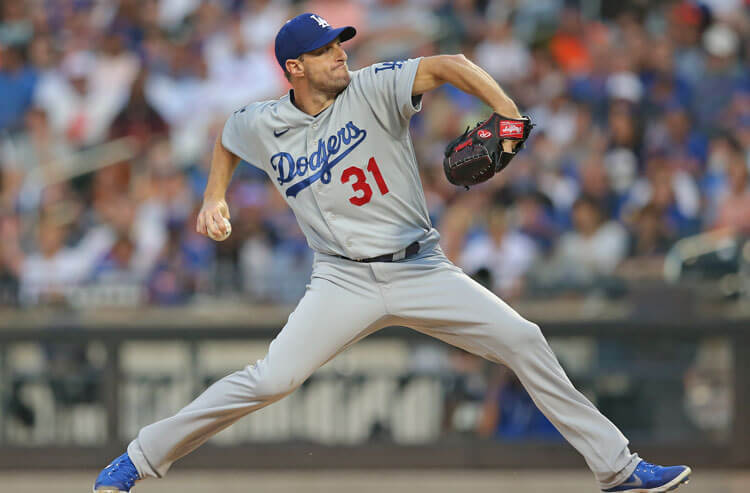 Mets vs Dodgers Picks and Predictions: New York's Freefall Continues in a Max Mismatch
Provided by