Giants vs A's Picks and Predictions: Oakland Comfortable in the Bay Area

The A's have been in cruise control at home recently but get a tough test with the Giants visiting Saturday. Find out who has the MLB betting edge with two solid starters on the mound with our picks and predictions.

On Saturday, the Oakland Athletics host the San Francisco Giants at RingCentral Coliseum. These teams both have what it takes to make deep postseason runs, so it’ll be interesting when they clash today.

Will Oakland pick up a victory over San Francisco? Continue reading our free MLB betting Giants vs. Athletics picks and predictions to get a better idea.

Kevin Gausman (12-4, 2.40 ERA): Gausman is no longer looking quite like the guy that was a legitimate Cy Young favorite earlier in the year, but he’s still pretty productive as a member of this San Francisco rotation. The Giants have won in each of Gausman’s last three trips to the mound, with the righty allowing just five earned runs over 16 innings of work in that stretch. Gausman has also been much better on the road this year, as he is 6-2 with a 1.55 ERA away from home.

Sean Manaea (8-8, 3.77 ERA): Manaea is coming off of a rough outing against the Texas Rangers, as the lefty gave up seven runs in five innings of work. Manaea gave up three homers in that game, and he has now allowed at least five runs in two of his last three appearances. Earlier in the year, Manaea gave up just one run and struck out seven batters in six innings against the Giants. He’ll be hoping to recapture that form in this one, but it’s hard to be overly confident given the last few starts.

Giants: No injuries to report.
A's: OF Ramon Laureano (Out).
Find our latest MLB injury reports.

The Athletics are 5-0 in their last five home games. Find more MLB betting trends for Giants vs. A's.

Manaea pitched six innings of one-run ball against the Giants on June 25, and he struck out seven batters in that game. Oakland ended up losing that game 2-0, but the team will feel great about its chances if the lefty can turn in another performance like that. The Giants team he’s facing just so happens to have scored only six runs total in its last three games, so it’s not like he’s facing some juggernaut of an offense. He just has to be extra careful against Kris Bryant and Buster Posey, who are a combined 6 for 13 with two doubles, a homer, and three RBIs against him.

Offensively, the Athletics should be able to score a few off Gausman, which could be the difference in what is likely to be a low-scoring game. Starling Marte, who has been incredible this season, is 7 for 10 with two doubles, a homer, and six RBIs against Gausman in his career. Meanwhile, Matt Olson has also gone yard off the righty, and Mitch Moreland is another option that absolutely mashes against righties.

Overall, the Athletics are just a really good value at this number, as they have a good pitcher on the mound and the right hitters to do work against Gausman.

Gausman hasn’t been dominating teams like he was early in the season, but he was pretty good in his three starts coming into this one. As long as he’s not giving up more than three or so runs, the Under is always going to be an enticing play in San Francisco’s games. That’s partly because the Giants offense is extremely homer-dependent and can disappear at any moment. But, it’s also because the team has the third-best bullpen ERA in baseball. With that said, don’t expect the Athletics to score a ton of runs here.

On the other side, Manaea might be coming off of a rough outing, but he had a great start against the Giants earlier in the year. San Francisco’s offense isn’t hitting well right now, so that little bit of confidence could go a long way for the lefty. 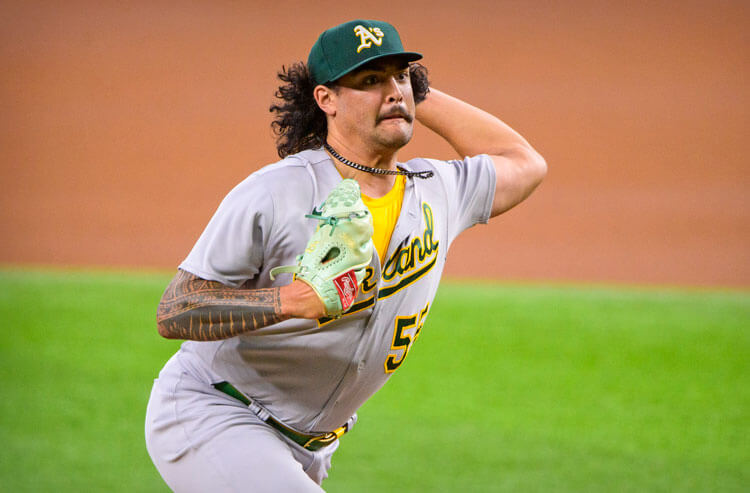 Giants vs A's Picks and Predictions: Oakland Comfortable in the Bay Area
Provided by