Phillies vs Padres Picks and Predictions: Philly Facing Musgrove at the Right Time

The Phillies came away with a win at Petco Park on Friday night, and against a struggling Padres team, they can make it two in a row. Check out our picks and predictions and find out if San Diego can steal one back against Philadelphia.

After earning a road victory in the first game of this series, the Philadelphia Phillies look to make it two in a row when they face the San Diego Padres on Saturday.

Will Philadelphia win two straight against San Diego? Continue reading our free MLB betting Phillies vs. Padres picks and predictions for August 21 to get a better idea.

Aaron Nola (7-7, 4.48 ERA): Nola gave up four runs in 4 1-3 innings in his last trip to the mound, a 7-4 loss to the Cincinnati Reds. Nola has now pitched five or fewer innings in each of his last three starts, and Philadelphia has lost in two of those three games. Not only has Nola struggled this year but the righty is also just 3-4 with a 5.56 ERA on the road.

Joe Musgrove (8-8, 3.11 ERA): Musgrove is coming off his worst start of the season, as the righty gave up six runs on 10 hits in five innings of work against the Arizona Diamondbacks. Musgrove has mostly been impressive for the Padres this season, but he is capable of coming out and getting shelled on any given night. Musgrove is, however, 5-4 with a 2.43 ERA at home this season, so he’s definitely more comfortable in San Diego.

The Phillies are 4-0 in their last four games as road underdogs. Find more MLB betting trends for Phillies vs. Padres.

Nola isn’t performing like the pitcher that had a 3.28 ERA last season, but we have seen some flashes of that guy throughout the year. This seems like a game where we might see him throw it back, as the Padres haven’t been great recently. San Diego left a ton of runners on base last night, and the team now runs into a pitcher that is usually at his best when the pressure is on. If the Padres can’t capitalize on having runners in scoring position, this won’t be particularly close.

Offensively, the Phillies will be looking for Bryce Harper to come up big for them. The Philadelphia star hit a two-run bomb in last night’s win, and that was against a southpaw. Now, Harper faces a right-handed pitcher, and he’s batting .304 with 20 homers and 45 RBIs against righties on the year.

Another player to keep an eye on is Jean Segura, who is 5 for 13 against Musgrove in his career. He can easily get on base in this one, and his speed would be a factor.

Nola hasn’t been very good this season, but this total is pretty low for a meeting between him and Musgrove — who has also had his fair share of struggles throughout the summer. A huge majority of the tickets are currently on the Over in this game, but almost half of the money has come in on the Under thus far. What that means is that sharps are likely pounding the Under, and that’s the side you want to be on.

While it’s never easy to just go against your gut, it’s not impossible to see why people would like this Under. Nola might not be the guy he once was, but he has had some throwback performances this year. Also, the Padres have scored three or fewer runs in two of their last three, so they’re not exactly hitting well at the moment. Meanwhile, Musgrove has been great at home all year. 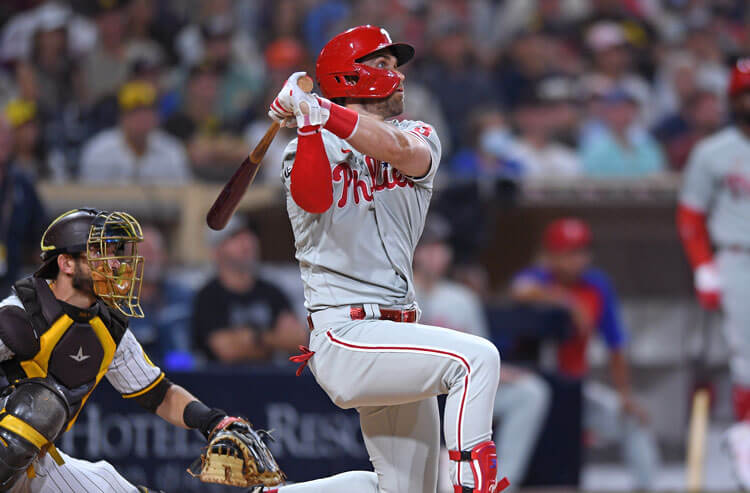 Phillies vs Padres Picks and Predictions: Philly Facing Musgrove at the Right Time
Provided by