The New York Mets head to the Windy City on Tuesday to begin their three-game series against the Chicago Cubs.

The Mets made some big moves in the offseason in the hopes of making a postseason run and will look to continue their recent success, having won five of their last six games. MLB betting lines have the Mets installed as slim -123 road favorites with the Over/Under at 7.5.

Here are our best free Mets vs. Cubs picks and predictions for Tuesday, April 20, with the first pitch at 7:40 p.m. ET.

Taijuan Walker (0-0, 2.61 ERA): Walker has a pair of no-decisions in two starts this season but his velocity appears to be back to what it was before Tommy John surgery three years ago, with his four-seamer up to 96 mph. In his previous start last Tuesday, he fanned eight batters while allowing a single run through 4 1-3 innings against the Phillies.

Jake Arrieta (2-1, 3.18 ERA): Arrieta is coming off a loss against the Brewers where he surrendered four hits and three runs through five innings of work. The veteran won his first two games of the year and is hoping to recapture his previous form as a Cub after three mediocre seasons in Philadelphia.

The Cubs are 2-9 in their last 11 home games vs. a right-handed starter. Find more MLB betting trends for Mets vs. Cubs.

There was a time not so long ago where you wouldn't dare fade the Cubs at Wrigley Field. But this is 2021 and the Cubs are just 1-4 in their last five games at home and 2-8 in their previous 10 games overall.

The biggest culprit for Chicago's lack of success has been their struggling sluggers, with the Cubs 29th in the majors in scoring at 3.48 runs per game, while ranking dead-last with a batting average of .192.

Arrieta will toe the rubber for the Cubs today and he had plenty of success in his first go-around with the Cubs, winning the NL Cy Young Award in 2015 and the World Series in 2016. That said, the 35-year-old has been subpar over his last two years in Philadelphia, pitching to a 4.75 ERA with a WHIP of 1.48 through 180 innings in 33 starts.

The Mets have also struggled at the plate, especially in hitting with power, but they are making contact as they rank eighth in the majors with a .246 average.

Outfielder Michael Conforto finally broke through with a couple of nice outings on the weekend. While the Mets are still getting poor hitting from Francisco Lindor and Jeff McNeil, their track record suggests they will break out soon as well.

Walker will get the start for the Mets today and the 28-year-old is starting to show flashes of the pitcher that was considered one of baseball's brightest prospects until undergoing Tommy John surgery. Now three years removed from the procedure he's back to throwing his fastball in the 96 mph range and could be primed for a bounce-back season.

With the Mets 5-1 in their last six games, grab the short price with the road faves.

While it's difficult to trust either starting pitcher in this one, it is even harder to trust the batters on both teams. It's been a small sample size for both Arrieta and Walker but they have looked solid this season, while the lineups on both sides have been unreliable.

The Cubs are second-last in the majors in runs per game—and that's despite a 13-run explosion against the Braves on the weekend.

Take that outlier out of the equation and the Cubbies are averaging just 2.79 runs per game in their other 14 contests. They've scored more than four runs in a game just once in their previous 12 contests, and have been held to two or fewer runs in six of them.

The Mets have a strong lineup on paper but it hasn't looked that way so far this season. New York is dead last in the majors with 0.6 home runs per game and is coming off a series against the Rockies where they averaged just 2.67 runs per game in the hitter's paradise that is Coors Field.

With the Under going 3-1-1 in the Mets' last five games overall and also cashing in nine of the Cubs' previous 12 contests at home, back it again. 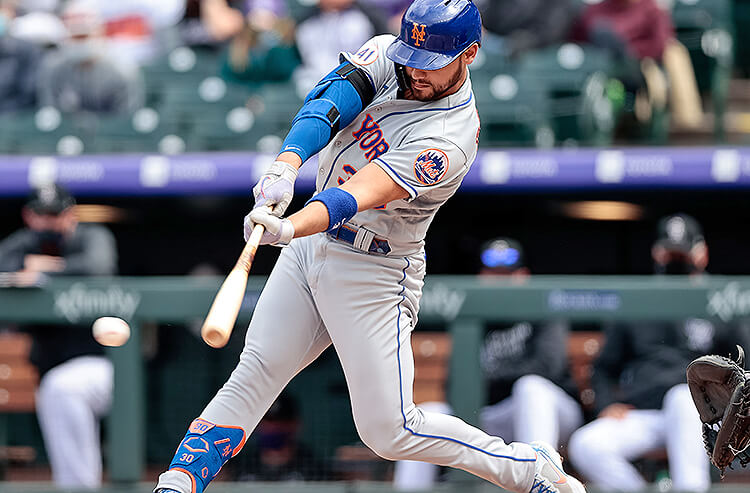 Mets vs Cubs Picks: Fade the Cubs at Wrigley? Welcome to 2021
Provided by