A big part of MLB prop betting is identifying hot and cold trends early in the season and attacking those. One obvious trend so far is that the St. Louis Cardinals have an affinity for the long ball.

Their 25 home runs lead the big leagues and they’ll get a chance to add to that total when they go up against the slumping Patrick Corbin. And our best bet to sock a dinger tonight for the Cards? None other than their newest acquisition, Nolan Arenado.

We break down that pick and more with our best free MLB prop bets and predictions for Tuesday, April 20.

Arenado has fit in quickly with his new teammates in St. Louis and that shouldn’t be surprising considering he's one of the best players in baseball.

The Cardinals’ new third baseman is hitting .266 with a .834 OPS and has already knocked four dingers and driven in 10 runs. And while the Cardinals' offense has been home run-heavy early on this season, that might not be a problem in tonight’s matchup against the Washington Nationals.

Patrick Corbin gets the ball for the Nationals and it has been a rough start for the lefty. Corbin has a 21.32 ERA and a 3.00 WHIP through his first two starts, and opponents are hitting a whopping .387 against him this season and have taken him deep four times already.

If there is a team that knows something about dingers, it’s the Cards, who lead the MLB in home runs. Arenado is our favorite bet to go deep in this one.

We get an under-the-radar pitcher’s duel as Zac Gallen and the Arizona Diamondbacks take on Luis Castillo and the Cincinnati Reds. It’s under-the-radar because Gallen pitches for Arizona and Castillo have gotten off to a rocky start for Cincy.

Gallen has burst onto the MLB scene and has quickly become the D-backs' best starter after finishing ninth in Cy Young voting a year ago. While he missed his first couple of starts with an injury, he looked in fine form in his first outing back.

The right-hander allowed one run on three hits while striking out eight batters in just four innings of work against the Oakland A’s. You can expect him to go a little longer in start No. 2. While this is a tough matchup against a Reds team that is swinging some hot sticks, they have plated three runs or fewer in six of their last eight games and will be without Nick Castellanos (suspension) and Mike Moustakas (illness).

On the other side, it has been a woeful start to the season for Castillo, pitching to a 7.04 ERA and a 1.43 WHIP. But he's much better than those numbers. He faces a D-backs lineup that, while scrappy, bats just .211 against right-handed pitching and is without top hitter Ketel Marte.

This game is a good bet to fall Under the five-inning total.

The Kansas City Royals are one of the biggest surprises early on in this MLB season, leading the American League Central with a 9-6 record. They have been balanced, ranking 12th in scoring and 13th in team ERA. Simply put, they look like a big league team again.

They hand the ball to Brad Keller for Game 2 of their series against Tampa Bay, and while the Rays took Game 1 by a score of 4-1, they have not abandoned their free-swinging ways. Tampa Bay ranks 28th in strikeouts, getting punched out 10.41 times per game this season. That includes 12 Ks on Monday.

Keller has looked better with every start this season and is coming off an outing in which he allowed just one run on four hits while striking out five in 5 2-3 innings against the Angels. While he has never been much of a strikeout artist, this matchup against the Rays makes his strikeout prop too tempting to pass up. 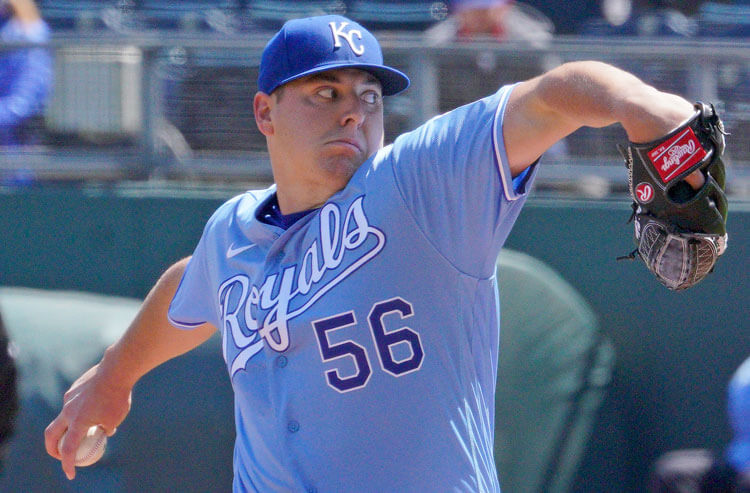