Mariners vs A's Picks and Predictions: Down Goes The Town

Seattle has dominated the AL West basement battle taking place in Oakland so far and will look to complete the sweep today. With Robbie Ray turning a corner, our MLB betting picks like the Mariners to make it three straight vs. the A's.

The Oakland Athletics and their AL-worst 23-47 record will host reigning AL Cy Young winner Robbie Ray and the Seattle Mariners this afternoon, as the A's look to avoid getting swept in a three-game set that has seen them outscored 17-2.

Despite sitting next to each other in the AL West standings, the Mariners have a run differential that is 104 runs better than the A’s, and Ray is rolling. Can the Athletics be competitive today as shorter +105 home MLB betting dogs?

Find out in our free MLB picks and predictions for Mariners vs. Athletics.

Seattle opened at +115 but got hammered quickly as the line moved 10 points to +105. Seattle closed as -125 favorites in the first two games of the series. This afternoon’s total opened at 7. Seattle is 3-2 SU in the season series with the Over going 4-1.

Robbie Ray (6-6, 4.25 ERA): It hasn't been a Cy Young-type season for the lefty but Ray is coming off a dominant seven-inning, 10-strikeout start where he carried a no-hitter into the seventh inning. His velocity is certainly down from last season and he's been more good than great this season, but he’ll face an Athletics team that has scored the second-fewest runs in the AL.

Frankie Montas (3-7, 3.53 ERA): Despite the Athletics going 3-11 SU in Montas’ starts this year, the right-hander has been a solid option for the worst team in the American League. It's been going a little south this month for Montas, though, as he has given up 14 runs over his 17 innings in June.

Montas has been a much better pitcher at home this season with a 2.72 ERA at the baseball mecca, RingCentral Coliseum. He also has one of the best chase rates in baseball and batters are hitting just .186 off his splitter.

The Mariners are 10-1 SU in the last 11 meetings in Oakland. Find more MLB betting trends for Mariners vs. A's

Mariners vs A's picks and predictions

Seattle and Oakland may both sit in the AL West basement, but the Athletics are the much worse team. They currently have a -108 run differential, which is the worst in the AL, only the Tigers have scored fewer runs, and they own the league’s worst home record at a laughable 8-27.

The A’s have won just one of their last 11 games at RingCentral Coliseum and even when they get some decent pitching from today’s starter, Frankie Montas, they’ve won just three of his 14 starts.

The series has been extremely lopsided so far. Seattle won 8-2 in the opener while the A’s had just two at-bats with runners in scoring position, and the Mariners tagged Oakland's bullpen for six runs over three-plus innings.

The Mariners followed that up with a 9-0 blanking yesterday, where the Mariners went 0-for-6 with RISP and steady starter Paul Blackburn was tagged for seven runs on 10 hits over four innings.

The books are moving the lines in favor of the Athletics, but we think Ray and the Mariners can pull off the sweep today.

The Oakland A’s now own both the worst record (23-47) and lowest average attendance (8,449) in all of Major League Baseball.

Both teams will be getting away following this game, as the Athletics will be traveling to Kansas City while the Mariners will be staying in the state to begin a series with the Halos on Friday.

Although the splits favor Montas at home vs. Ray on the road, the Seattle lefty is coming off dominant back-to-back starts where he’s thrown 14 innings, allowed one run, and given up just six hits. He also had his command in check, with a 14/2 K/BB mark.

The matchup with the Athletics is a good one for Ray, as Oakland has one of the worst walk rates in baseball and over the last 30 days, the A’s have the second-worst offense in baseball in terms of runs created and slugging.

With Oakland's offense stuck in neutral, having scored two or fewer runs in six of their last eight games, Montas will have to be nearly perfect today to keep the A’s from getting swept. He’s been solid this year but has given up 24 hits for 14 runs (nine earned) over three June starts. He gave up 10 hits over five innings in his last start vs. the light-hitting Royals.

Seattle's offense has not impressed this season but has improved over the last month, with a wRC+ that sits 12th in the league, while Julio Rodriguez and Jesse Winker have been raking over the last seven games.

With both pitchers likely to get deep, we aren’t looking too much into the bullpens here, as both certainly have their issues and sit in the bottom quarter of the league in ERA. Seattle’s closing situation has looked better of late, with Diego Castillo and Paul Sewald settling into co-closer roles.

Teams with sub-.500 records don’t usually sweep three-game sets and that’s likely why we’re seeing the market move to the Athletics here today. However, Oakland has been epically bad offensively this season and face Ray, who could be turning a corner and will see a team that’s hitting just .209 vs. lefties, which is the worst mark in baseball.

With Ray vs. Montas, we’re getting a low total of 7. It’s hard to trust this Oakland offense to do anything against left-handed pitching, and especially against the reigning AL Cy Young winner.

Robbie Ray in his last 2 outings

The middle of the order for the Mariners is locked in, but this is not a deep lineup, and they sit 25th in the league in runs per game. If it weren’t for the Tigers, the Athletics would be the worst offense in baseball. This is a battle of two of the lowest-scoring teams, and the pitching matchup is not favorable for either lineup.

Montas is 4-9 O/U on the season and has been better at home than on the road this season. He’s had a rough June but five of his 14 runs allowed over his last three starts were unearned, and this is still a pitcher who can miss bats.

Both of his two primary offerings in his fastball (29.2% whiff%) and splitter (30% whiff%) can sit batters down. If his slider, a pitch he throws 16% of the time is working, he can dominate.

With both starters getting long leashes and possibly pitching into the seventh (each pitcher's total out market is set at 18.5), the bullpens shouldn’t have too much impact on this game. Since each game in the series has been one-sided, both clubs have all their top arms ready to go as well.

With travel set for each club and today being played under the afternoon sun, we could also see some weaker lineups today. Give us an Under 7 today in a game that features two awful offenses and two solid starting pitchers.

No team hits for a worse average versus left-handed pitching than Oakland. Today's home side is hitting .209 vs. LHP and its .646 OPS is the third-worst mark in baseball. This is arguably the worst offense in the league that produces even less when facing a southpaw.

Oakland has to travel to Kansas City for tomorrow and has done nothing in this series offensively. The A's are 14-for-66 (.212) in the series with just two extra-base hits and 0-for-8 RISP. Now this weak lineup faces Ray, who has been strong over his last two starts and has kept the ball in the park. They could also be trotting out a weaker lineup with the matinee. 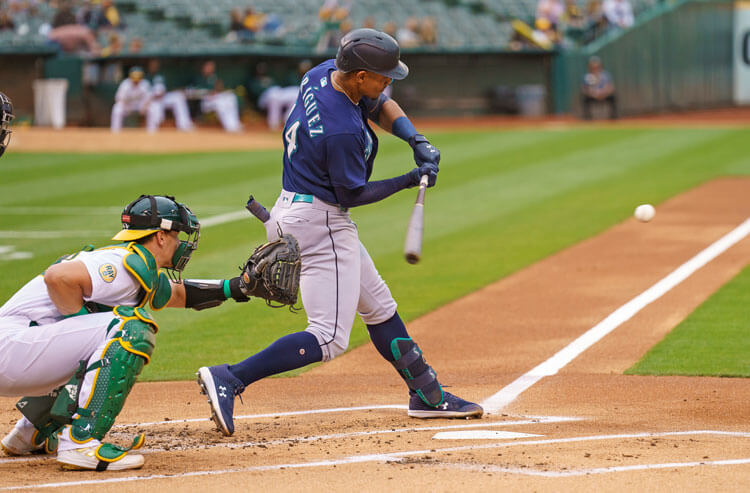 Mariners vs A's Picks and Predictions: Down Goes The Town
Provided by