On today's MLB slate, we have 10 matchups to choose from, looking for the best player prop value out there. For today's picks, we like a hot hitter to stay hot, a cold hitter to break out of a slump, and Joe Musgrove to keep pitching gems. 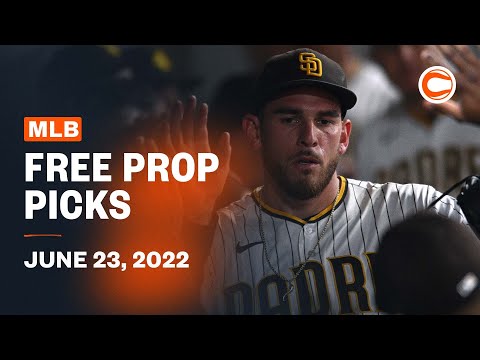 It’s an interesting day on the diamond with 10 games on the MLB schedule, but with just three in prime time, that means player props all day.

Today, we focus on Mariners' slugger Ty France who has owned this matchup with the A’s, Giancarlo Stanton will try to bust out of his slump when he digs in against the Astros, and Joe Musgrove will look to keep dealing against the Phillies.

Check out our MLB player prop picks for Thursday, June 23, as we bank on some of baseball’s best to do their thing.

Ty France is quietly having an All-Star caliber season for the Seattle Mariners and he’ll look to keep that up when he and the M’s close out their series against the Oakland Athletics.

France is hitting .319 with a .873 OPS which includes him whacking 10 dingers and driving in 45 runs. The Mariners' first baseman has been hot most of the season and is in a stretch where he has hits in five of his last six games — batting .333.

Today, he’ll dig in against A’s ace Frankie Montas. The right-hander has been solid this season but has hit a bit of a rough patch, allowing eight runs on 18 hits over his last two starts. Those games were against the Guardians and Royals, who aren’t the biggest bashers out there.

Trying to work out your kinks might not be a great idea against a guy like France, particularly when he’s had your number in the past. In 11 career plate appearances against Montas, France is hitting .545 with two doubles.

Ty already has four hits in this series, so look for him to knock a couple more and take the Over on his total bases at a solid plus-money value.

Stanton snaps out of it

New York Yankees' slugger Giancarlo Stanton has always been known as a streaky hitter and right now, he’s hit a cold patch. But that just may be giving us some value as the Bronx Bombers open a series against the Houston Astros.

Yes, Stanton is just one for his last 26. But if there is something to take away from this stretch of games, Stanton isn’t wildly swinging at pitches. In fact, he has as many walks (seven) as strikeouts. Tonight he gets an intriguing matchup against Astros' starter Framber Valdez.

Valdez has been solid this season, pitching to a 3.16 expected ERA, but he is not a strikeout pitcher. The lefty relies on his sinker to get a lot of soft contact, but if he misses his spots with that sinker, opponents can hit it a long way.

Stanton and his 14 home runs sure are capable of that. Even though it is a small sample size, Stanton is 3-for-5 with a double in his career against Valdez. With Stanton also hitting a solid .267 against lefties this season, backing him to break his slump at this price is a solid bet.

San Diego Padres' pitcher Joe Musgrove has arguably been the best pitcher in baseball this season and he’ll need his best stuff when he takes the ball tonight against a tough Philadelphia Phillies lineup.

Musgrove has looked close to unhittable at times for the Padres this season. The right-hander has pitched to a 2.55 expected ERA and is limiting opponents to a .220 expected batting average. He has also been as reliable as they come, pitching at least six innings in all 12 of his starts.

Now, the Phillies boast a powerful lineup, but they haven’t been as potent when facing right-handers. Philly ranks 16th in OPS and 18th in wRC+ when facing righties this season. They’ve also hit a bit of a slump, scoring just seven runs over their last four games.

The Phillies counter Musgrove with Ranger Suarez. The lefty has been so-so, with an expected ERA of 4.21 and a .271 opponent expected batting average. Suarez now must deal with a Padres lineup that is heating up, ranking fourth in OPS and wRC+ over the last two weeks while ranking 10th in OPS when facing lefties for the season.

With the Padres winning 11 of Musgrove’s 12 starts, and Musgrove recording a win in eight of those, we like him to do so again in tonight’s game at nice plus money.