The bats of NL MVP candidate Paul Goldschmidt, Tommy Edman, and Brendan Donovan make the Cardinals' offense a deadly one, and one that should do the heavy lifting in sending this game Over the 9.5-run total.

The battle for first in the NL Central rages on this Thursday afternoon at American Family Field as the St. Louis Cardinals take on the Milwaukee Brewers.

After going into Wednesday’s tilt in a deadlock, the Cardinals were able to pull ahead in the standings with a 5-4 victory.

Can the Brewers bounce back and salvage a series split? Find out in our free MLB picks and predictions for Cardinals vs Brewers on Thursday, June 23.

The Cardinals opened as tepid consensus favorites of -109 on the road, but bettors have since flocked to the home team. The Brewers are now -110 to -120 favorites, depending on where you look. The opening total of 9.5 has remained unaltered.

If you're betting on Cardinals vs. Brewers, here are two of the best bonuses* available:

Jason Alexander (1-0, 2.42 ERA): Jason Alexander – a 29-year-old rookie – has acquitted himself fairly well since being called up on June 1. He’s been able to limit damage over each of his first four starts, as evidenced by his 2.42 ERA. Alexander was 6-2 with a 2.64 ERA at Triple-A Nashville earlier this year.

The Brewers are 1-8 in their last nine home games. Find more MLB betting trends for Cardinals vs. Brewers

The Cardinals’ rock-solid offense should lead the way to another victory over the Brewers on Thursday afternoon.

St. Louis is fifth in runs per game (4.82) this season, thanks in no small part to NL MVP candidate Paul Goldschmidt. The stalwart first baseman is second in the league in batting average (.339) and third in both RBI (60) and OPS (1.041). His 17 home runs are nothing to sneeze at either.

Tommy Edman has a hit in 18 of his first 20 games in June. Accompanying him in setting the table with great effect is Brendan Donovan, who carries a .341 average this month. These two typically hit in front of “Goldy,” so this lineup could ambush Jason Alexander just minutes after the first pitch.

Alexander’s 2.42 ERA belies how he’s struggled through his first four starts. He also owns a 1.70 WHIP in that sample, so he’s dealt with plenty of traffic on the bases since being promoted.

Goldschmidt has a 1.211 OPS with runners on base this season, and Nolan Arenado is not far behind in that department at 1.038. Look for them to cash in the Cardinals’ runs early and often.

St. Louis starter Dakota Hudson can get himself into trouble with walks – he issues 4.1 per nine innings – but has avoided significant damage by holding batters a to .149 average with runners in scoring position.

He has yet to allow a home run in this situation in 2022. In fact, Hudson has served up only four round-trippers all year, not good for a Milwaukee team that relies so heavily on the longball (fourth in the majors).

The Cardinals should get Over bettors most of the way there on Thursday, but they’ll need a little help from the Brewers to clear this high line.

Christian Yelich could get things cooking for Milwaukee from the leadoff hole, as he has two homers and four RBI in just eight lifetime at-bats against Hudson. Andrew McCutchen has elevated his game in recent weeks, going .295 at the dish with a tater and eight RBI. Willy Adames also has three homers in his last six games.

Hudson seldom goes long into games – he didn’t even qualify for the win after being pulled while shutting out the Brewers on May 29 – giving Milwaukee ample opportunity to expose the soft underbelly of the Redbirds bullpen.

Pitchers not named Ryan Helsley, Genesis Cabrera, or Giovanny Gallegos own a 4.60 ERA pitching in relief for St. Louis this season.

Manager Oliver Marmol would seemingly not have Cabrera available after using him for two innings to lock down the victory on Wednesday.

Not only can the Cardinals take advantage of an over-his-head Alexander in this one, but they can also pile on the runs against the Brewers' shoddy middle-relief corps. Milwaukee is only 10th in the majors with a 3.48 ERA in relief despite boasting Josh Hader and Devin Williams.

The Redbirds team total Over is tempting, as is the first five innings Over, but the ordinary Over is a very strong play on its own at plus-odds. 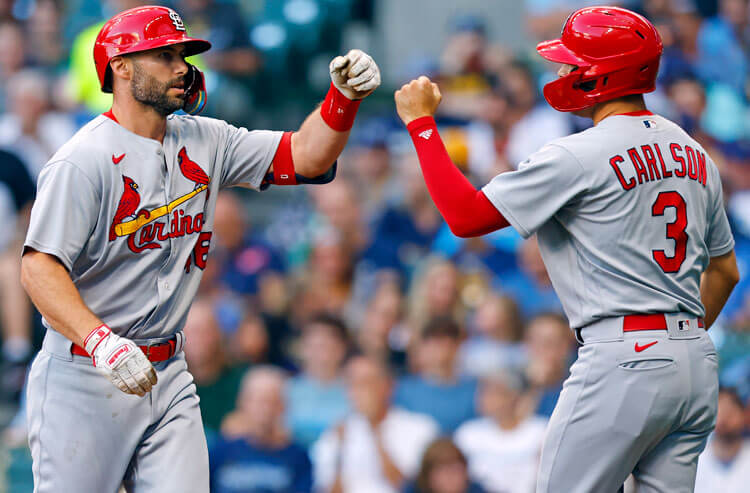 Cardinals vs Brewers Picks and Predictions: Runs Galore in Thursday Matinee
Provided by