Dodgers vs Giants Picks and Predictions: MLB's Best Square Off

The two best teams in the MLB clash in a weekend series that could swing the NL West crown. Our Dodgers vs Giants picks explain why L.A. should get to Anthony DeSclafani more than his stats suggest.

The MLB betting board for Friday is headlined by a matchup between the two teams with the best record in the majors as the Los Angeles Dodgers face off against the San Francisco Giants at Oracle Park.

This should be a terrific three-game series between a pair of rivals with identical 85-49 marks and the Dodgers are slim -120 road favorites for Friday's contest with the Over/Under set at 8.5.

Here are our best free Dodgers vs. Giants picks and predictions for Friday, September 3, with the first pitch scheduled for 9:45 p.m. ET.

David Price (4-2, 3.88 ERA): The veteran southpaw was a starter for much of his career but primarily worked out of the Dodgers bullpen at the beginning of this season. That all changed when injuries hit the L.A. rotation and Price has started eight games over the last two months. In those eight starts, he has logged 35 innings and pitched to a 4.11 ERA.

Anthony DeSclafani (11-6, 3.38 ERA): Desclafani is expected to make his scheduled start on Friday despite injury concerns after departing the mound early with a trainer in his previous start on Sunday. The right-hander struggled in that contest, surrendering six hits and a pair of home runs through three innings. That said, he has been impressive over the course of the entire season, pitching to a 1.11 WHIP with an opponent batting average of .224 across 135 2-3 innings.

Dodgers: None.
Giants: Anthony DeSclafani SP (Probable), Tommy La Stella 2B (Questionable), Wilmer Flores 1B (Out), Evan Longoria 3B (Out), Donovan Solano 2B (Out).
Find our latest MLB injury reports.

The Dodgers are 10-1 in their last 11 road games. Find more MLB betting trends for Dodgers vs. Giants.

These NL West rivals enter this weekend series with identical 85-49 marks and this could be a pivotal clash as they look to win the division and avoid a Wild Card battle.

Both of these teams have faced some tough foes lately, but while the Giants lost five of their last seven games as they took on the NL East-leading Braves and NL Central-leading Brewers, the Dodgers are coming off a three-game sweep of the Braves and swept the Padres in San Diego last week.

These teams are almost identical when it comes to hitting, with the Giants ranking sixth in the majors in OPS (.756) and the Dodgers ranking seventh (.753). They've both also gone ice-cold from the plate lately with San Fran ranking 24th in the majors with an OPS of .676 over the last 15 days and the Dodgers ranking 28th over the same period with an OPS of .631.

The Giants will have Anthony DeSclafani and his impressive 3.38 ERA and 1.11 WHIP on the mound. Advantage Giants right? Maybe not when you consider how poorly the right-hander has played against L.A. this season. In five starts versus the Dodgers, Desclafani has been smashed for 31 hits and 22 earned runs through 21 innings.

With the Dodgers 10-1 in their last 11 games on the road and the Giants 1-4 in their previous five contests at home, back the away favorites tonight.

Both of these squads have been brutal at generating runs over the last couple of weeks, which means both have also been Under machines lately. That said, these lineups are simply too good to hold in check long-term.

The Dodgers are absolutely dripping in talent with studs like Mookie Betts and Max Muncy swinging the bat. Let's not forget that the Boys in Blue were averaging 5.24 runs per game just two weeks ago and still rank third in the majors in that category.

Likewise, despite the Giants' recent struggles they still rank ninth in the majors with 4.75 runs per game.

Add in a San Fran pitcher that has been eviscerated by the Dodgers and a stiff 9 mph breeze blowing out towards centerfield at Oracle Park, and we're leaning towards the Over. 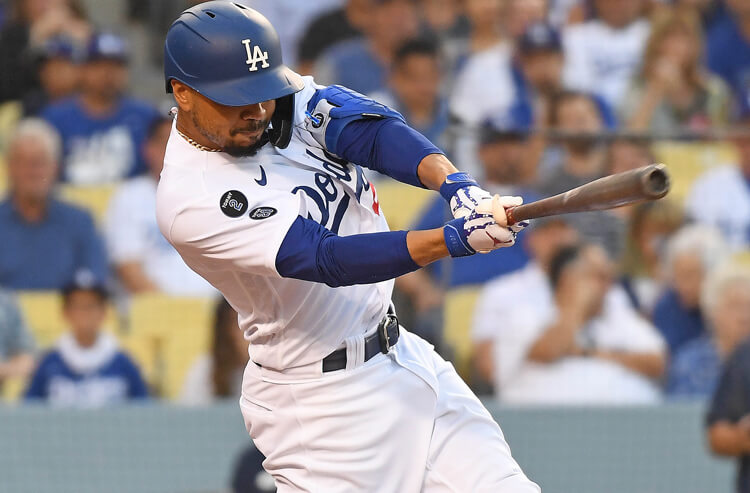 Dodgers vs Giants Picks and Predictions: MLB's Best Square Off
Provided by