We're hitting the regular-season stretch run, and have some great trends backing our MLB prop picks for Friday. Find out why we're perma-fading Jake Arrieta, along with the rest of baseball's best bets from around the majors.

Let’s kick off the first weekend of September with some winners in the MLB prop betting market.

We start by digging up one of our oldest, but now rarely used, trends with the Rocky Mountain Low thanks to a solid pitching matchup at Coors Field. And fading Jake Arrieta will become a regular occurrence, likely until he is no longer pitching. He takes the ball tonight as the Padres welcome the Astros to town.

We break down and pick these games and more with our best free MLB prop bets and predictions for Friday, August 3.

Rookie Vladimir Gutiérrez has been a pleasant surprise for the Cincinnati Reds, giving them another reliable arm in their rotation. The right-hander is coming off an excellent month of August where he pitched to a 2.80 ERA and a 1.10 WHIP. Gutiérrez hopes to put on another strong performance as the Reds welcome the Detroit Tigers to town.

While Gutiérrez had his hot streak come to an end last time out, he has allowed two earned runs or fewer pitching at least six innings in six consecutive starts. The other thing to note is that Gutiérrez has started to see a bump in his strikeouts recently.

Before a shortened outing last time out, Gutiérrez had struck out six or more batters in four consecutive outings, and now he goes against a Tigers team that strikes out more when playing on the road than any other team in baseball at 10.03 times per contest.

Bet on Gutiérrez to bounce back and rack up the punchouts in this one.

Let’s bring back a prop that has been long dormant this season – the Rocky Mountain Low.

For those who don’t know, the Rocky Mountain Low refers to betting the Under (first five and full game) in Rockies home games with good pitching matchups and elevated totals thanks to the thin air at Coors Field. And while this spot has been rare the last few seasons, it has some value today.

Antonio Senzatela gets the ball for the Rockies in this one and the right-hander has been outstanding lately. Senzatela is pitching to a 2.08 ERA and is limiting opponents to a .229 batting average over his last four starts. While the Braves have a solid lineup they rank a mediocre 17th in batting average and 10th in OPS when playing on the road.

Atlanta counters Senzatela with a right-hander of their own in Huascar Ynoa. Ynoa has picked up right where he left off after coming off a lengthy IL stint. He owns a 2.60 ERA and is limiting opponents to a .167 batting average in three starts since re-joining the Braves’ rotation.

While the Rockies are a more potent team at home, this first-five number has value on the Under.

Hello, welcome to the fade Jake Arrieta section of the article.

The Padres picked up Arrieta presumably because they had no other options. The veteran right-hander has spent most of the season getting lit up as a member of the Chicago Cubs, pitching to a 6.88 ERA while allowing opponents to hit for a .315 and a .940 OPS.

And his first start with the Padres was more of the same. Arrieta last just 3 1-3 innings against the Colorado Rockies where he surrendered five runs on seven hits. Now, all he has to do is go up against arguably the best lineup in baseball in the Houston Astros.

The Astros lead the majors in scoring and batting average and are second in OPS. Plus, they can be frustrating as hell to go against because they are so patient, as they strike out less than any team in baseball. Bet on the Astros to beat up on Arrieta and go Over their first-half team total. 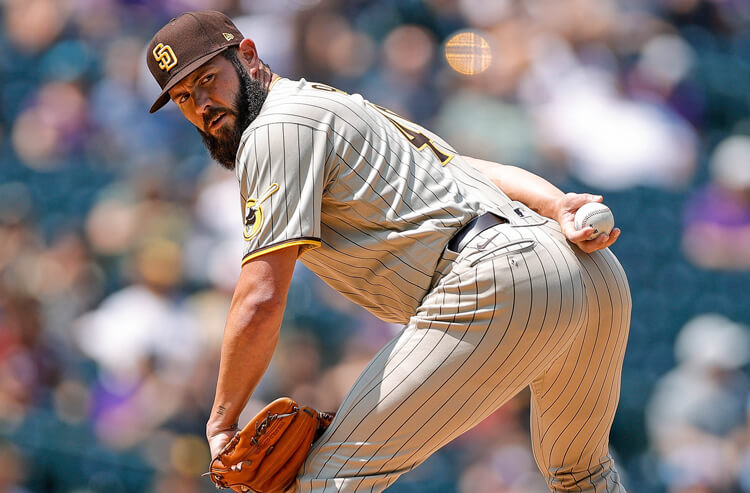 Today’s MLB Prop Bets, Picks and Predictions: Blasted by the Astros
Provided by