Toronto and Oakland face off in a three-game set as both cling to hopes of an AL Wild Card berth. The Jays bats have been sleeping, but Sean Manaea has been awful on the mound. Find out what gives with our A's vs Blue Jays picks.

A pair of playoff hopefuls will open up a three-game set Friday night as the Oakland Athletics head north of the border to take on Alek Manoah and the Blue Jays.

One more bad series for Toronto and the season is likely over as it’s do-or-die time for Toronto, who will face lefty Oakland lefty Sean Manaea, who posted a 9.09 ERA in five August starts.

Here are our free picks and predictions for Oakland Athletics vs Toronto Blue Jays for Friday, September 3.

Sean Manaea (8-9, 3.97 ERA): The regression police have caught up to Sean Manaea, who saw his ERA go from 3.01 to 3.96 in a matter of five August starts. The lefty has allowed 22 runs across his last 20 innings, has failed to complete six innings since July 28, and has served up seven long balls over his last three starts.

The Athletics are 2-8 SU in Manaea’s last 10 starts, but he does own a favorable 3.76 ERA on the road this season. Manaea had visa issues and was bumped from his scheduled Thursday start and will be pitching on an extra day of rest. He’s made four starts on six days of rest this year and has a 5.56 ERA with batters posting a .839 OPS.

Alek Manoah (5-2, 3.15 ERA): There is an argument to be made that rookie starter Alek Manoah has been the Jays’ second-best pitcher down the stretch next to Robbie Ray. Outside of one bad start where the hulking righty immediately went on the bereavement list, Manoah has pitched to a 1.74 ERA since July 31.

Toronto is 10-4 SU when Manoah starts and 5-1 SU over his last six starts. The right-hander has the second-best K/9 in the rotation (10.41) and hasn’t given up an extra-base hit in two straight starts. Manoah is +4,000 to win the A.L. ROY which are the lowest odds out of any pitcher.

A's: Stephen Piscotty OF (out), Seth Brown OF (out), Ramon Laureano OF (out), Mitch Moreland 1B (out).
Blue Jays: George Springer OF (probable), Santiago Espinal IF (out).
Find our latest MLB injury reports.

The Under is 11-1 in Blue Jays' last 12 games as a favorite. Find more MLB betting trends for A's vs. Blue Jays.

After 15 straight days of baseball, the Blue Jays got a rest on Thursday to prepare for the biggest series of the year as Oakland comes to town. Both teams are chasing the final Wild Card spot in the A.L. and this series could go a long way in determining if either team gets to the postseason.

Toronto comes into the three-game set with a 7-8 SU record over its last 15, but did not fare well against some poor opponents, as the Jays went just 5-7 SU versus Baltimore, Detroit and Washington over that stretch. The offense is still struggling to put up big numbers, averaging just 3.5 runs per game over its last 10 games, but there are a few things in their favor.

George Springer is not 100 percent healthy, but even his presence in the lineup — likely DH’ing — is a welcoming sign for Toronto bettors as injuries and re-injuries seem to be courting the outfielder.

Secondly, the Jays are learning to win close games, which wasn’t the case through the season’s first 100 games. Five of their last six victories have been by two or fewer runs as the bullpen has, dare we say it, been more than decent with a 2.34 ERA over the last two weeks.

Another advantage Toronto has is on the mound, and a big reason it is a -141 favorite. Alek Manoah has been one of bright spots on the team this year, as the rookie pitcher owns a 1.06 WHIP and is looking like a bonafide front-end starter. Right-handed hitters are hitting just .156 and all batters are sporting a .180 AVG against the righty at home this year which is impressive considering the home parks he’s played at this year.

The Toronto offense will have every opportunity to put up some early runs against Oakland’s Sean Manaea. Don’t let that 3.97 ERA fool you, the lefty has been a hot mess of late and it hasn’t just been a couple of starts. He owns a 9.09 ERA over his last five starts — none of which have been quality — and the A’s have lost four of those five games. The strikeouts are down and he’s been getting hit hard and often with 31 hits allowed with eight homers over his last 20 innings. It wasn’t long ago the A’s were riding a 3-11 SU streak.

The Oakland offense managed 23 runs over its three-game set versus the Tigers, but the A’s saw a healthy diet of junk pitchers from Detroit. A combination of Manoah and a suddenly confident Toronto bullpen should keep this power-lacking lineup in check. We doubt this will be a one-sided affair but trust the home side more in this spot and with our money.

We’re taking the Jays on the ML, even with the movement, and avoiding the runline like the plague.

Since Springer injured himself during the Jays’ West Coast trip 15 games ago, the bats have gone cold but the Unders have been hot. Toronto is 4-11 O/U over that stretch thanks to an offense that seems to be pressing and a starting rotation that has looked like one of the best in the A.L.

Manoah isn’t afraid to throw more than 100 pitches and get deep, which is good news for Under bettors, as the right-hander hasn’t allowed an extra base over his last 12 1-3 innings while striking out 13 compared to just three walks. He’s also allowed just two long balls in his last 50 innings of work. Oakland will be hard-pressed to score four or more runs.

The Jays have seen some terrible starting pitching over their last six games (Detroit and Baltimore) but averaged just 3.33 runs per game. For comparison’s sake, the A’s managed 23 runs in their recent three-game series against Detroit while the Jays’ offense scratched across just six total runs in its three games with the Tigers last weekend. Manaea may be struggling, but there aren’t a ton of indicators that the Toronto bats are going to wake up Friday night.

The struggles at the plate have been so prevalent for Toronto that it has brought back special hitting/assistant coach Dante Bichette, who has said the young players are struggling with the mental grinds of a full 162-game season.

Both teams should have the availability of the best arms in the pen as Toronto had the day off yesterday and although Oakland used its best relievers in yesterday’s 8-6 afternoon game, they weren’t over-used in the previous days and should be ready to go.

Oakland is riding a three-game Over streak, but against teams with a winning record, the A’s are 4-8-1 O/U in their last 13.

The roof will likely be open at the Rogers Center, which isn’t always a good thing. The Under is 14-5-2 since the Jays have returned home, but with COVID protocols, the roof has to be open to simulate an outdoor environment.

We’re back on the Under again tonight after a 2-0 SU day yesterday riding the favorite and the Under. 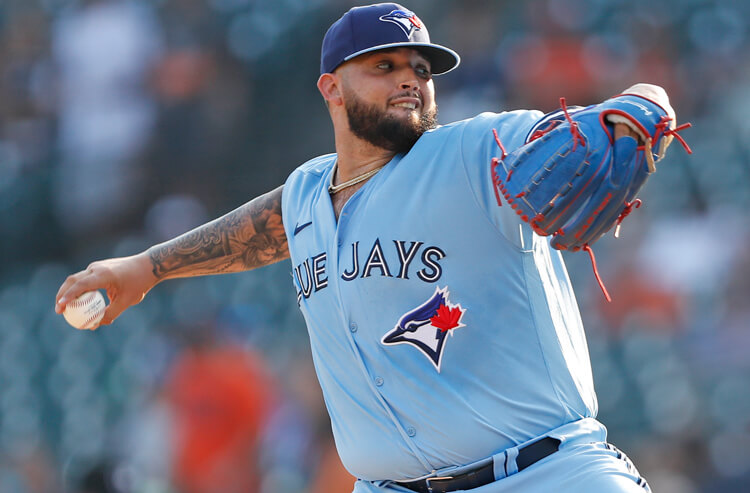