Diamondbacks vs Dodgers Picks and Predictions: D-Backs Aren't the Ones to Cool Dodgers

L.A. is on a roll and ever-eager to keep pace with San Fran in the NL West. The division doormats try to slow them down tonight, but our Diamondbacks vs. Dodgers picks reveal why that's a pretty risky proposition.

The Los Angeles Dodgers host the Arizona Diamondbacks at Dodgers Stadium in Los Angeles, California at 10:10 p.m. ET on Wednesday, September 15. The Dodgers are hot coming into this one, so it’ll be interesting to see if the Diamondbacks offer any resistance here.

Merrill Kelly RHP (7-9, 4.30 ERA): Kelly hasn’t pitched since August 11, when he gave up five runs on 11 hits in five innings of work against the San Francisco Giants. It was a very uninspiring outing for the righty, but he has actually performed pretty well against the Dodgers this season. In three starts against Los Angeles, he has a 3.38 ERA and has struck out 21 batters. He might be 0-2 against the Dodgers, but that’s not exactly his fault.

Julio Urias (17-3, 2.98 ERA): Urias is one of the hottest starters in baseball right now, as the lefty has given up two or fewer runs in each of his last nine starts. Urias has also struck out seven or more batters in four of his last seven starts, and he did pitch five shutout innings in a 13-0 victory over this Diamondbacks team on August 1. He’s 2-0 with a 0.77 ERA in two starts against Arizona this year.

The Under is 19-6-3 in the Dodgers’ last 28 games. Find more MLB betting trends for Diamondbacks vs. Dodgers.

Last night, the Diamondbacks and Dodgers played a high-scoring game, but that scoring figures to be rather one-sided in this one. Urias has been one of the most dominant pitchers in the game in recent months, and Arizona isn’t well equipped to take advantage of his one weakness. The lefty occasionally hangs a pitch or two over the middle of the plate, which is why most of his runs allowed come on home runs. However, the Diamondbacks have hit only 43 homers against southpaws this year. That means it should be another productive night for Urias, who has given up only one run over 11.2 innings against the Diamondbacks this season.

Offensively, the Dodgers should be able to get it going against Kelly in this game. The righty hasn’t pitched in a big-league game since early August, and he’s likely going to be a bit rusty when he takes the field at Dodger Stadium in this one. Also, Mookie Betts, Cody Bellinger and Will Smith have combined to hit five homers off of Kelly, and the entire Dodgers lineup is batting a combined .280 in 99 at-bats against the righty. This just isn’t a good matchup for the Diamondbacks, and it could turn into a blowout.

Don’t be surprised if this is the game that Bellinger finally makes something happen at the plate. He has really been struggling, but he has had Kelly’s number in the past.

Kelly is coming off a pretty lengthy absence, making it likely that he’ll struggle a bit with this Dodgers lineup. The righty has been awesome against Los Angeles all year, but there’s a good chance the rust will show in this game.

However, there’s just as good of a chance that Urias will go out and completely dominate this Arizona lineup. Only seven teams have hit fewer homers off lefties than the Diamondbacks this season, and that lack of power will sting against a starter that generally only gives up runs on mistakes left over the middle. The Dodgers could put up a big number, but it likely won’t be big enough to ruin Under bettors.

Did you know that if you parlayed today’s MLB Diamondbacks vs. Dodgers picks, you could win $21.82 on a $10 bet? 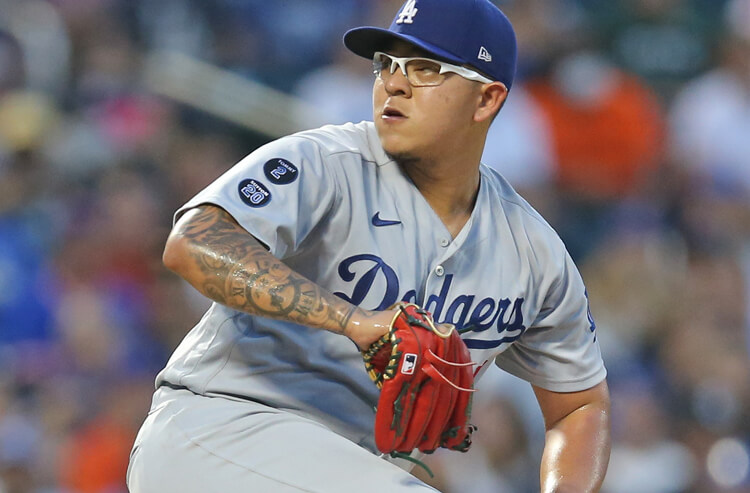 Diamondbacks vs Dodgers Picks and Predictions: D-Backs Aren't the Ones to Cool Dodgers
Provided by