With the Chicago Cubs starting an inexperienced Sean Newcomb, Game 2 of this doubleheader looks to be a perfect spot for St. Louis' bats to get rolling. As such, our MLB betting picks are targeting the Over on STL's team total in addition to the run line.

The Chicago Cubs and St. Louis Cardinals will play the second game of today’s doubleheader with Sean Newcomb making his first MLB start since 2020 for the Cubs while the Cardinals will counter with new trade acquisition Jose Quintana as -180 favorites.

With the Cards likely rolling another strong lineup in Game 2 thanks to a tight playoff race, is 20 points enough with a huge starting pitching matchup and Chicago likely to dig into the bullpen in the opener?

Find out in my free MLB picks and predictions for Cubs vs. Cardinals.

The Cardinals opened as -150 favorites for the second game of today’s doubleheader but once Sean Newcomb was announced, the line moved to -180. The total also moved from 7.5 to 8.5.

Sean Newcomb (0-0, 11.57 ERA): Newcomb was called up from Triple-A to start the second game today. The left-hander currently has a 3.38 ERA in the minors but has started just one game out of 12 appearances (24 innings). Newcomb threw 71 pitches in his last outing on July 28 but has had some control issues with eight walks over his last 11 innings and a 57% strike rate. Newcomb is a filler for a doubleheader and will likely leave at least 15 outs for a bullpen that has traded pieces, is missing arms, and threw innings in the first game.

Jose Quintana (3-5, 3.50 ERA): Quintana will be making his first start for the Cardinals after coming over from Pittsburgh at the deadline. He is in the middle of his best season in some time. His 3.23 FIP indicates his numbers are legit this year and ranks 17th in baseball for FIP (100 innings pitched). Quintana comes in having not allowed a run in two straight starts that spans 12+ innings and includes a decent offense in the Phillies. The Cubs are an average hitting team vs. left-handed pitching but strike out at a Top-10 rate.

The Cubs are 0-7 straight up in their last seven games of the second game of a doubleheader. Find more MLB betting trends for Cubs vs. Cardinals

Cubs vs Cardinals picks and predictions

It’s never easy to handicap the second game of a doubleheader but St. Louis has significant advantages tonight.

The books moving the opening line from -150 to -180 after the Sean Newcomb news isn’t enough in my opinion. If Marcus Stroman vs. Miles Mikolas is worth -160, Newcomb vs. a very underrated Jose Quintana is certainly worth more than 20 points — especially with the Cubs’ bullpen.

Stroman is going in the opener and THE BAT projects him for just under 18 total outs. A bullpen that just lost David Robertson, Mychal Givens, and Scott Effross via trades and Steven Brault out with COVID, will be severely shorthanded today and could need 12 outs deep before the second game even starts.

Newcomb hasn’t started a game at the MLB level since 2020 and has just one start in the minors this season. He could see 75 pitches, but with some recent control issues, his efficiency will likely suffer vs. a St. Louis team that has the third-best wOBA against left-handers.

Matt Dermody is the Cubs’ 27th man for the doubleheader today. Sean Newcomb will start Game 2, but no move to announce yet.

Quintana should be able to continue his recent stretch of solid play. He’s gone 13+ straight innings without allowing a run and faces a team he’s beaten twice this year with a bad Pittsburgh offense.

The Cubs may have kept their best bats in Ian Happ and Wilson Contreras, but the moves they've made in their bullpen will have serious consequences today, especially if Newcomb throws a dud. He’s allowed eight runs in four relief appearances for the Cubs this season.

I like the St. Louis offense to continue to crush left-handed pitching and play with a lead when Newcomb exits but with Quintana in great form, I’m avoiding the full-game Over 8.5. The jump from 7.5 to 8.5 is too significant for me.

However, that doesn’t mean I'm not doubling down on the St. Louis offense. It could be feasting on fringe pitching talent for eight or nine innings tonight.

The Cards’ team total can be found at 4.5, and even if the home side doesn’t need to bat in the bottom of the ninth, I like this total to hit the Over.

Newcomb has been stretched out and could find himself throwing 75+ pitches today regardless of how hard he is being hit. Second-game starters sometimes just have to eat innings and that could be the case here.

Even if the lefty goes just three frames, the Chicago pen has been decimated via trades and ailments. St. Louis will get to see a Chicago relief group that is legitimately missing its three best arms in Robertson, Givens, and Effross.

With Stroman going in the first game, Chicago has a better chance of keeping things close in the opening game which means the Cubs have a higher probability of using their best arms in the early game.

I’m all over the Cards today as the Cubs are in evaluation mode with holes in the rotation and bullpen. Stroman isn’t going to get deep in the opener — leaving some outs on the table for a bullpen that will also be busy in Game 2.

There isn't much threat for the Cardinals’ offense in terms of pitching as the best arm it might see is Brandon Hughes and his 3.18 ERA. If things are close in Game 1, Chicago might use its best arms in that spot and open the door for some B-bullpen action in the later game.

Quintana is in great form and should hold the fort while the Cards stack runs. The price was not corrected enough for the Newcomb start, in my opinion. 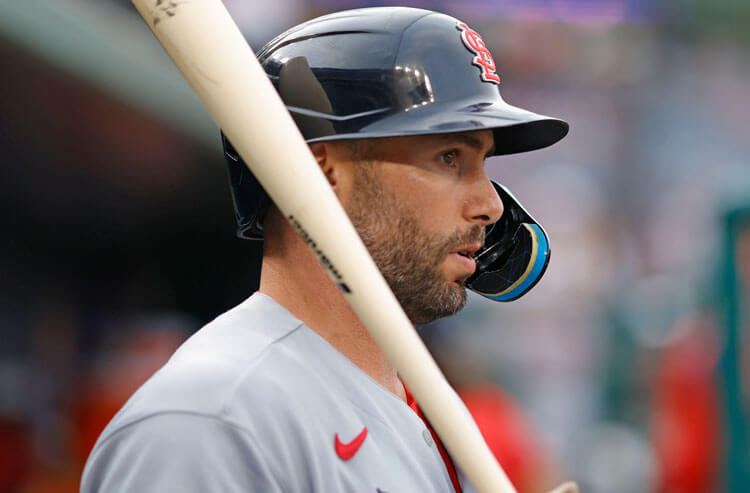