Despite their position at the bottom of the AL West, the Oakland A's might just be able to take this series finale against the now Ohtani-less Angels. Read more in our MLB betting picks and predictions for A's vs. Angels below.

The Oakland Athletics and the Los Angeles Angels will wrap up a three-game series at Angel Stadium on Thursday afternoon.

The teams split the first two games of this series, with the Angels winning 3-1 on Tuesday, and the A’s prevailing by the same score on Wednesday.

Who will take the rubber match? Find out in our free MLB picks and predictions for A's vs Angels on Thursday, August 4.

The Angels opened as tepid -120 consensus favorites, and bettors must be feeling lukewarm about them too. L.A. can now be had at about -115 at most major sportsbooks. The total was unveiled at 8.5, but most sites have had to knock that number down by half a run.

Paul Blackburn (6-6, 4.15 ERA): Paul Blackburn bounced back from a disastrous outing against the Rangers (10 runs on 10 hits over 4 1-3 innings) to blank the White Sox over five frames on Saturday. However, the A’s lone All-Star representative has allowed four or more earned runs in six of his last 11 appearances, and his ERA has spiked from 1.70 to 4.15 in that span.

The Angels are 3-9 in their last 12 games against AL West opponents. Find more MLB betting trends for A's vs. Angels

A's vs Angels picks and predictions

The Athletics should secure a rare series win over the Angels on Thursday afternoon.

Paul Blackburn’s ERA has been ballooning thanks to some dreadful recent outings, but he’s taken care of business against L.A. this year, producing a 2.38 ERA over two starts (11 innings).

Blackburn will take on an Angels lineup that’s struggling mightily without Mike Trout. L.A. has averaged only 3.25 runs per game since the All-Star break and has been held to two runs or fewer in seven of those 12 affairs.

Once Blackburn departs, a fairly reliable A’s bullpen will step in. This unit is ninth by ERA (2.91) since the All-Star break.

Janson Junk counters on the mound for the Halos, fresh off a sharp start against the dreadful Royals. The A’s bats are far from the most intimidating in the majors, but they can jump the yard early and often. Only the Yankees have homered more than Oakland has since the All-Star break, outpacing them 28-21.

Seth Brown – batting .379 to start the second half of the campaign – leads his club with five dingers in that span. He’s hit 12 of his 15 taters on the road this year.

It’s much too early to gain a full picture of Junk as a major-leaguer, but his 3.87 ERA and 1.33 WHIP over five combined seasons in the minors shouldn’t inspire much confidence for those looking to back the 26-year-old rookie.

The L.A. bullpen – a modest 19th in the majors by ERA since the All-Star break (3.92) – could find themselves doing some heavy lifting in this one.

The Angels’ less-than-inspiring lineup should ensure that this contest goes below the total.

The Halos have gone deep a mere seven times in the second half of the season. Shohei Ohtani – who hit three of those bombs – could soon be joining Trout on the shelf, as the reigning AL MVP is currently considered day-to-day with a forearm issue. He was lifted in the sixth inning of Wednesday night’s win over Oakland.

L.A. is still waiting for Jared Walsh to get it going again this year – he’s batting .214 since the All-Star break. Taylor Ward has cooled off considerably after a hot start to the campaign, and he owns a .211 average over his last 11 games.

The A’s bullpen has answered the bell in numerous high-leverage situations since the second half began, as this unit has recorded 16 holds and six saves.

Though Lou Trevino is no longer with the team (traded to the Yankees), Zach Johnson (four holds, two saves, 1.93 ERA since the break) and A.J. Puk (three holds, two saves, 0.00 ERA in the same sample) are more than capable of keeping the Angels’ bats at bay.

Trend bettors should note that the Under is 6-1-1 in the last eight meetings between these two clubs at Angel Stadium.

Oakland fans haven’t had much to cheer about this season, but they should see their team take this game and the series from the Angels on Thursday afternoon.

The A’s are averaging exactly one full run more on the road than they are at home this year (3.86 to 2.86) and will face a depth starter in Junk here.

With closer Raisel Iglesias shipped out, L.A.’s shaky bullpen is that much worse compared to just a few days ago. Oakland also has the pitching to silence the slumping Angels bats.

The trends favor the A’s too, as they’re 9-2 in their last 11 games against right-handed starters, while the Angels are 16-35 in their last 51 games in the same situation. The Halos have also dropped 23 of their last 32 home games. 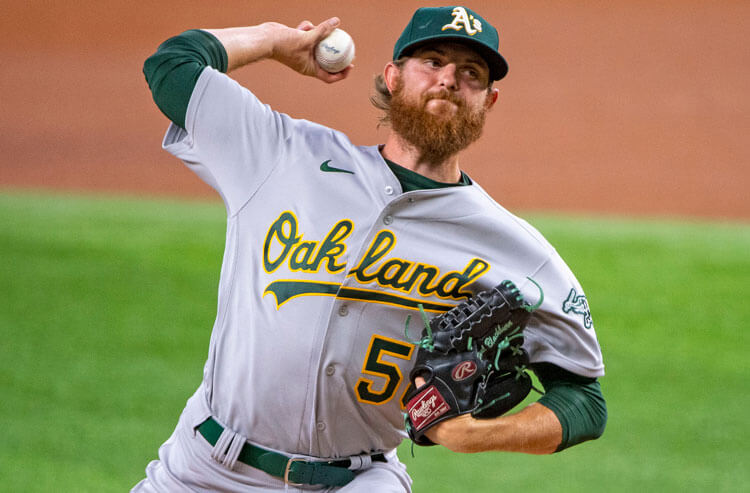