Cardinals vs Cubs Picks and Predictions: How Sweep It Is

Zach Davies is coming off a strong outing and will look to lead the Cubs to their fifth straight win and a sweep of the rival Cardinals. Find out if we like them to do it, as -130 home favorites on Sunday Night Baseball, in our Cardinals vs. Cubs picks.

The final game on the MLB betting board for Sunday is an NL Central showdown between the St. Louis Cardinals and Chicago Cubs.

The Cubs have taken the first two contests of this three-game set at Wrigley Field and will look to sweep their division rivals as -130 favorites tonight.

Here are our best free Cardinals vs. Cubs picks and predictions for June 13, with the first pitch scheduled for 7:08 p.m. ET.

This moneyline has been around the block since first going up at TwinSpires, where Chicago opened -141 and stretched to -152, then backed up to -124 and is -130 at 4 p.m. ET. It's two-way action on the moneyline, with the Cardinals taking 64 percent of tickets and the Cubs seeing 56 percent of dollars. The total is stable at 9.5, with 55 percent of tickets/60 percent of money on the Over.

Carlos Martinez (3-6, 6.21 ERA): A former two-time All-Star, Matinez's play has really dropped off a cliff in recent years with his velocity and command declining. The 29-year-old has struggled all season but has been especially brutal lately, allowing 15 earned runs over 4 2-3 innings in his last two starts.

Zach Davies (3-3, 4.45 ERA): Davies has had an up-and-down first season with the Cubs. He has pitched to a woeful 1.57 WHIP with an opponent batting average of .272 in 13 starts but has thrown much better recently. In his previous outing, Davies went six scoreless innings against the Padres and allowed just one hit. He also pitched five scoreless innings against the Cardinals three weeks ago.

The Cubs are 20-6 in their last 26 home games. Find more MLB betting trends for Cardinals vs. Cubs.

The Cubs come into this game on a hot streak, having won 19 of their last 26 games, including four in a row. They are now tied for first place in the NL Central with a 37-27 record, five games ahead of the third-place Cardinals.

The Cubs have been hitting the ball well, especially at home, where they rank eighth in the majors with an OPS of .773 and plate 5.21 runs per game.

Although Davies looked awful in April, pitching to a 9.47 ERA in five starts, he has really turned things around since. He has a 2.16 ERA and 1.27 WHIP over his last eight outings and the Cubs have won six of those contests.

St. Louis has been trending in the opposite direction, going 1-8 in its last nine games. The Cardinals are 17th in the majors with an OPS of .694 and will have the struggling Martinez on the mound tonight.

With the Cubs playing much better baseball lately, boasting superior pitching, and having home-field advantage, their line of -130 seems like a great bet.

As awful as the analytics for both pitchers are, the Under 9.5 looks like the play tonight. The Cardinals have been struggling to score since the start of May, plating just 3.61 runs per game over their last 28 contests.

Not only has Davies improved his play lately but the Cubs' bullpen is one of the best in the business, leading the majors in opponent batting average (.195) while ranking second in ERA (2.61).

The Cubs have gone 21-9-3 to the Under in their last 33 home games as a favorite while the O/U is 3-7-1 in the previous 11 meetings between these division foes. 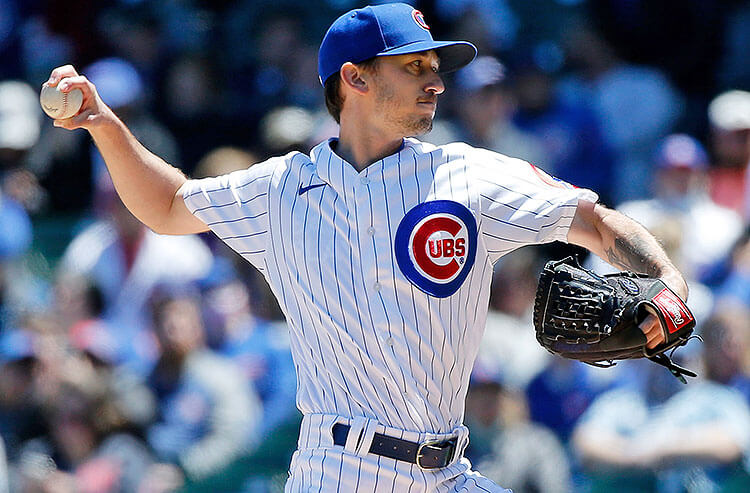 Cardinals vs Cubs Picks and Predictions: How Sweep It Is
Provided by

Indians vs Blue Jays Picks and Predictions: Mejia vs. Matz a Recipe for the Over
Josh Inglis | Aug 4, 2021