Toronto lefty Robbie Ray is having one of the best seasons of his career and is coming off a dominant 13-strikeout performance. Can he stay hot against the division rival Red Sox? Find out with our best free picks for Blue Jays vs. Red Sox.

The Toronto Blue Jays and Boston Red Sox will wrap up their three-game set Sunday afternoon at Fenway Park as a couple of lefties do battle with Robbie Ray opposing Martin Perez.

The Jays would be looking for the sweep if it weren’t for another bullpen implosion in the opener. Offensively, Vladimir Guerrero Jr. has been a force in this series, having launched tape-measure shots in each game and becoming the first player to reach 20 home runs this season.

Despite trailing the Red Sox by 5.5 games, the Jays come into Sunday’s match as a -120 favorite with the total opening at 10.

Here are our free MLB betting picks and predictions for Blue Jays vs. Red Sox for Sunday, June 13.

Robbie Ray (3-2, 3.36 ERA): Ray leads the Jays’ rotation in punchouts with 82 over 64 innings. He hasn’t lost a start in 10 straight games and is coming off a 13-K performance in his most recent start against the White Sox. Ray always had incredible stuff but it was his control that was an issue. Those problems seem to have been fixed as the lefty has just 14 free passes this year.

Martin Perez (4-3, 3.88 ERA): Perez got knocked around for six runs over two-plus innings last Tuesday and this will be his first start since. He was riding a four-game winning streak before the six-run meltdown. In eight of his 12 starts, the southpaw has allowed two or fewer earned runs. He won’t strike many out but clearing the fence against him is a tough task, as he has surrendered just five home runs in 60 innings.

The Red Sox are 1-7 SU in their last eight when their opponent scores five runs or more in their previous game. Find more MLB betting trends for Blue Jays vs. Red Sox.

The Jays were slight underdogs in the series’ first two games but are favored on Sunday. A big reason for that has to do with who is on the mound for Toronto.

Ray is enjoying one of the best seasons of his career. He currently sits fourth in the AL in K/9 at 11.47, is stranding runners at the second-highest rate, and is third in swinging-strike percentage. Ray is making a lot of batters miss and faces a Boston lineup that sits 20th in wRC+ versus lefties and could possibly be without Xander Bogaerts for the third straight game.

Bogaerts leads the Boston offense in AVG (.324) but has sat out both games of the series due to a knee injury and seems to be more doubtful than probable for Sunday’s game. His replacement, Marwin Gonzalez, has gone 0-for-6 with four strikeouts in the shortstop’s absence.

The Toronto lineup should be at full strength, though. The Jays are second in the league in home runs and own a .759 OPS which is good for the second-best mark in the AL. In Friday’s loss, every starter had a hit and the Jays went a combined 16-for-42 (.380 AVG). The Jays followed that up with a seven-run performance that included five home runs from five different players. There are no breaks in this lineup.

The Jays’ bullpen is always a scary thing to take into account when riding on the Toronto ML. They bounced back after a disastrous Friday with 3 1-3 innings of one-run ball Saturday and Ray has become reliable to get 18 or more quality outs.

The Red Sox may be a popular ML pick Sunday paying plus money at home, but it's for a reason.

Neither team has been profitable to the Over this year and both clubs are a combined 58-64-3 O/U on the season. Yesterday’s nine-run game just hit the Under (9.5), and if it wasn’t for a bullpen collapse on Friday the Jays would be 0-6-1 O/U across their last seven.

Ray has been giving up the long ball this year but he has minimized the damage with his lack of traffic on the bases. He is stranding an incredible 93 percent of his runners this season, which is a huge advantage for Under bettors when having action on a starter that likes to give up home runs. Ray’s swing-and-miss stuff is also elite this year and left-handed hitters are hitting just .196 with a .579 OPS off the pitcher in 2021.

Perez will be in tough against the Jays’ lineup, but he has a few things going for him. He's in a bounce-back spot after a rough previous outing. He's pitching on extra rest. The Jays hit right-handed pitching much better and Perez has performed better than most expected this season. He had an impressive 3.06 ERA heading into his last start and Toronto batters are 14-for-63 against Perez over his career — good for a .222 AVG.

Much like taking the Jays on the ML, we have to consider the bullpen in the total. The Toronto bullpen hasn’t been perfect but the management of it can certainly be better. Fans feel that manager Charlie Montoyo has cost his team too many games with his mismanagement of the relievers. They have lost 14 games out of the bullpen and a few of those losses could be tagged to the skipper. Montoyo seemed to be in a better place yesterday after a fairly clean 3 1-3 innings from the 'pen. Friday’s loser, Rafael Dolis, has pitched in two straight days and could be unavailable which wouldn’t be a terrible thing.

We love playing full numbers on totals and are giddy getting a flat 10 on Sunday after Saturday closed at 9.5. 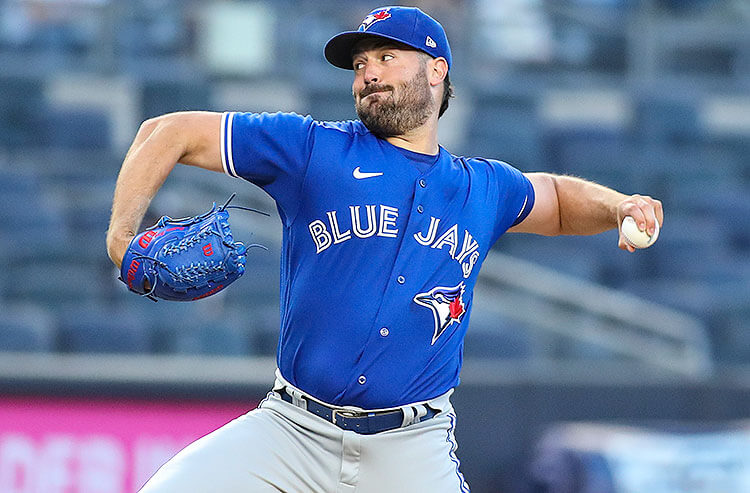