Walker Buehler and the Dodgers are going to come out hot after last night's blowout loss to Texas. We like L.A. to secure an early lead, and also like ace Shane Bieber to help Cleveland do the same. Check out our best MLB prop bet picks for Sunday.

Today, we're backing a surging Starling Marte, going back to one of our favorite props involving Cleveland ace Shane Bieber, and betting on Walker Buehler in a bounce-back spot.

Here are our best free MLB prop bets and predictions for Sunday, June 13, 2021.

When the Marlins traded for Marte last season they added some much-needed hitting ability to the top of their lineup. The 2016 All-Star has been one of the few bright spots in another forgettable year for Miami, leading the team with a batting average of .346 and an OPS of 1.011 in 29 games.

After missing more than a month of action with a rib injury, Marte returned to the lineup at the end of May and has been on a tear. Over the last week, the outfielder is batting .482 while plating eight runs. And in only one of seven contests over that span did he fail to plate a run.

Today, Marte and the Marlins will be facing off against Braves starter Drew Smyly, who has a 5.82 ERA with a 1.41 WHIP in 10 starts.

The Atlanta bullpen looks ripe for the picking, as well, with their relievers ranking near the bottom of the majors with a 4.77 ERA and a 1.41 WHIP. Bet on Marte to score again.

Taking the first five innings Under whenever Bieber takes the mound has been one of our favorite (and most profitable) bets over the last three summers. While that prop hasn't hit in each of Bieber's last two starts, we expect it to get back on track this afternoon.

Bieber is putting together another excellent season, going 7-3 with a 2.96 ERA, 1.19 WHIP, and 122 strikeouts in 85 innings. He should be able to mow down a Mariners lineup that ranks dead-last in the majors with an OPS of .648 while mustering just 3.86 runs per game.

What helps makes Bieber fever so profitable is Cleveland's inability to hit the ball. The Tribe rank 23rd in the majors in OPS (.688) and also rank 23rd in first five innings runs per game with 2.11.

While promising Mariners starter Logan Gilbert had a shaky MLB debut against Cleveland earlier this season, he has settled down since. In his last three starts, he has a 3.00 ERA with a 1.07 WHIP across 15 innings.

The Los Angeles Dodgers are coming off an embarrassing 12-1 home loss to the Rangers last night but should be in a good spot for a bounce-back performance today with Buehler toeing the rubber.

While the Dodgers loaded lineup struggled to hit with runners in scoring position earlier this year, they've been trending upwards for more than a month. Over the last 31 games, they have plated 5.81 runs per contest after averaging 4.82 runs/game through their first 33 games of the season.

Now they are looking for revenge against a Texas team that's just 7-22 in its last 29 contests and ranks 28th in the majors in scoring in the first five innings (2.02 runs/game).

Expect the defending World Series champs to jump out to an early lead in this one and back them on the -0.5 line at the midway point of the game. 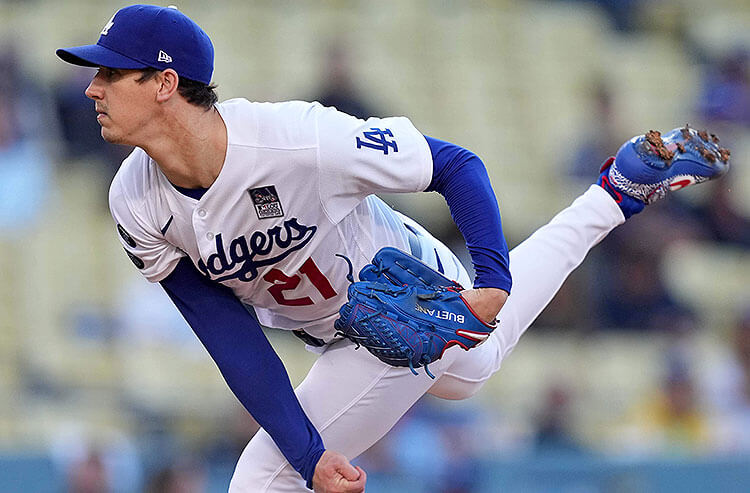