Cardinals vs Brewers Picks and Predictions: Back Goldschmidt & Co. in Game 2

After taking the series opener, the Milwaukee Brewers are sending an unproven Chi Chi Gonzalez to the mound. The Cardinals' lineup — specifically a dominant Paul Goldschmidt — should be able to take advantage, as our MLB betting picks explain.

The Milwaukee Brewers struck first against the St. Louis Cardinals in the battle for the NL Central lead, winning the first of the four-game set 2-0.

The Cardinals now are pinning their hopes of winning Game 2 with their ace Jack Flaherty, who is making his second start of the season after being hampered with a shoulder injury.

Can the Cardinals win Game 2 or will Milwaukee win and take a two-game lead in the NL Central?

Find out what we think with our free MLB betting picks and predictions for Cardinals vs. Brewers on June 21.

Jack Flaherty (0-0, 6.00 ERA): The Cardinals ace makes his second start of the season and it couldn’t come at a better time as St. Louis tries to regain first place in the division. The 26-year-old has been battling a right shoulder ailment. He had a platelet-rich plasma injection in his shoulder in early March to combat inflammation. After two rehab assignments that went well, Flaherty got his first start of the season last week against the Pittsburgh Pirates. He went three innings, allowing two runs on three hits.

Chi Chi Gonzalez (0-0, 7.71 ERA): With all the injuries to the Brewers’ starting pitching staff, they are desperate for depth and were able to pick up Gonzalez off waivers from the Minnesota Twins. The 30-year-old right-hander had two starts for the Twins, but couldn’t get to the fifth inning in either start. In his first start of the season on June 3, Gonzalez went three innings, allowing three runs on four hits against the Toronto Blue Jays. Against the Tampa Bay Rays a week later, Gonzalez went four innings, allowing three runs on eight hits.

Cardinals: Yadier Molina C (Out), Jordan Hicks RP (Out), Tyler O’Neill (Out), Corey Dickerson LF (Out).
Brewers: Luis Urias 2B (Out), Kolten Wong 3B (Out), Mike Brosseau 3B (Out), Alex Jackson C (Out), Pedro Severino C (Out).
Find our latest MLB injury reports.

The Cardinals are 4-1 in their last five games after scoring two runs or fewer in their previous game. Find more MLB betting trends for Cardinals vs. Brewers

The Brewers took the first game behind a great pitching performance from ace Corbin Burnes, but if they are going to win the second of four games against the Cardinals, they are going to have to do it with an unproven pitcher.

Chi Chi Gonzalez, who was picked up on waivers a week ago from the Twins, has had two starts in the majors and neither of them was awe-inspiring. He failed to reach the fifth inning in either start and now faces a Cardinals offense that was stymied by Burnes but has the ability to explode.

While St. Louis is also sending someone who hasn't pitched much this season to the mound, Jack Flaherty has proven his ability in the past. Now, with a start under his belt this season, I believe he's ready to take over baseball games like he did last season.

As good a pitcher as Jack Flaherty has been in the past, he is still not 100% as evidenced by his first start of the season against Pittsburgh six days ago. The Pirates are 28th out of 30 teams in batting average. Still, Flaherty gave up two runs on three hits in three innings.

Also, Flaherty is on a pitch count. Manager Oliver Marmol said Monday that Flaherty will be taken out after 75 pitches. Milwaukee’s offense is a touch better than Pittsburgh's as they are 23rd in batting average.

The Brewers, though, have been scoring runs despite their subpar stats. In their last 10 games, Milwaukee has scored four or more runs in eight of them.

While Flaherty might get chased in this game, the Over is going to hinge on his counterpart, Chi Chi Gonzalez. The former Twin has had two starts this year and neither of them went well. He allowed three runs in each of those games.

I think both pitchers will struggle, but Flaherty has the experience to overcome any mistakes. Gonzalez does not and a hungry Cardinals offense will be waiting to feast.

The Over is definitely trending with these two clubs, as it's 4-0 in the Cardinals' last four games after allowing two runs or fewer in their preview games. It's also 5-1 in their last six road games vs. right-handed starters.

On the flip side, it's 5-0 in Milwaukee's last five Game 2s of a series and is 5-1 in its last six home games vs. right-handed starters. Back it again tonight.

Paul Goldschmidt leads St. Louis in just about every offensive category on his team. He is first in home runs with 16, which is tied for 13th in the majors. His .339 batting average is second only to Minnesota's Luis Arraez’s .361. He's second in hits with 86, second only to Boston's Rafael Devers (89).

Goldschmidt is tied for fifth in doubles with 22 and is third in RBI with 58. His on-base percentage is .417, second in the majors, and his slugging percentage is sixth at .614.

Tuesday should be a golden opportunity for the designated hitter to pounce on a struggling pitcher. Chi Chi Gonzalez has allowed 12 hits in two games. Goldschmidt has 22 doubles — one of those tonight cashes this bet.

I wouldn’t be surprised, however, if Goldschmidt hits a homer off Gonzalez. Either way, he’s getting at least two bases against him. 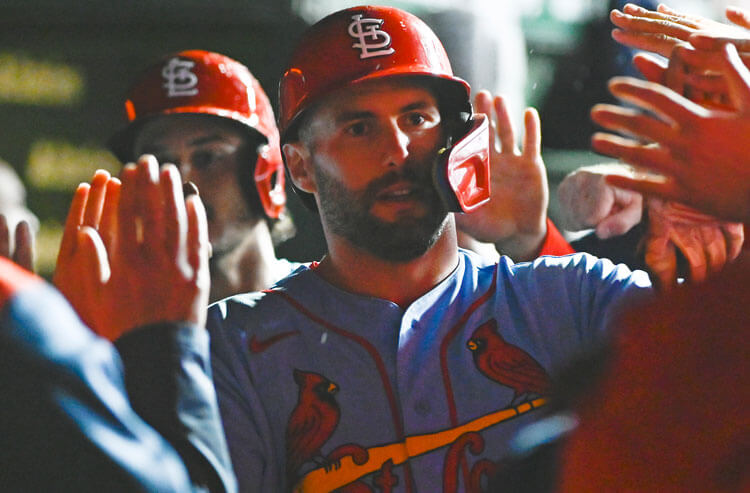 Cardinals vs Brewers Picks and Predictions: Back Goldschmidt & Co. in Game 2
Provided by