Despite an inconsistent Jose Berrios on the mound for the Blue Jays, a Cardinals team without Paul Goldschmidt and Nolan Arenado shouldn't pose too big of a threat. As such, our MLB betting picks expect Toronto to capture its seventh straight win.

Don’t look now but the Toronto Blue Jays bats are doing their thing once again and could pose a big problem for the St. Louis Cardinals in the opener of their mini two-game set tonight.

The Blue Jays plated a crazy 40 runs in their three-game sweep of the Boston Red Sox, and it will be rookie starter Andre Pallante who is tasked with slowing them down. And it sure doesn’t help that the Cardinals will be missing the shot in the arm their two best players would provide.

Is there value in backing Toronto as big favorites? Find out in our free MLB betting picks and predictions for Cardinals vs. Blue Jays.

The Blue Jays opened this interleague matchup as big -210 home favorites but that hasn’t stopped bettors from backing them as the line has moved to the -235 range. The total hit the board at 9 and was bet down to 8.5 but that number didn’t last long and quickly returned to 9 which is juiced to the Under as of Tuesday afternoon.

Andre Pallante (3-4, 3.34 ERA): Pallante is one of the Cardinals' top pitching prospects and mixes a mid-90s fastball with a slider and curve. He used those to pitch to a 1.07 ERA over 17 relief appearances, but things have not gone so smoothly since he took over a spot in the rotation at the start of June.

Jose Berrios (7-4, 5.22 ERA): Not many pitchers have had more of a roller coaster season than Berrios. The right-hander has some absolutely brutal starts this season but his final three starts heading into the All-Star break showed a glimmer of hope as he recorded three straight quality starts with a 2.95 ERA.

The Blue Jays have covered the run line in six of their last seven wins. Find more MLB betting trends for Cardinals vs. Blue Jays

The Blue Jays came out of the All-Star break absolutely mashing. They completed a sweep of the Boston Red Sox where they plated a ridiculous 40 runs over three games, hitting nearly .400 as a team with a 1.063 OPS.

Now, the Jays enter this mini two-game set winners of six in a row and looking to extend their lead in the AL Wild Card standings against a Cardinals team that comes into this game after losing a series to the Reds and missing some significant pieces.

Paul Goldschmidt, the betting favorite to win the NL MVP and Nolan Arenado have both been placed on the restricted list for this series in Toronto. This means neither are vaccinated. That is a ton of production to make up and makes the St. Louis lineup that much easier to navigate for Jose Berrios.

The Jays’ pitcher has been one of the most inconsistent starters in baseball this season but there is some reason to believe that he is starting to turn a corner. The right-hander owns an xFIP of 2.40 over his last three starts and his strikeout rate is way up, striking out 12.8 batters per nine innings over that stretch.

However, the real reason to like the Jays in this game is because of the matchup between their red-hot lineup and rookie starter Andre Pallante.

The right-hander’s strong performance in the bullpen early in the season earned him a spot in the rotation, but life as a starter has been a little more difficult. Pallante owns a 4.46 ERA and is giving up a .295 batting average to opponents over his eight starts while the last three have been particularly rough, where he’s surrendered 13 runs on 25 hits over 14 1-3 innings.

That doesn’t bode well against a team that leads baseball in batting average, OPS, and wRC+ over the last two weeks.

There is value in backing the Blue Jays to win by a couple of runs against a Cardinals team without their two best hitters and a shaky starter.

When it comes to the total, a quick bump up to 9.5 had bettors jumping on the Under, moving the number back to 9, but even at that number, it’s still a little high.

As noted, Jose Berrios is showing signs of improved play and the Cardinals will be without two players who account for 40.4% of the team’s home runs and 32% of their runs batted in.

And while the Jays are red hot at the moment, they are a streaky bunch and aren’t immune to going cold for stretches at the plate. Remember the first game of that series against the Triple-A Royals? They scored just one run in that game.

Additionally, if Pallante doesn’t last long in this game, the Cardinals can turn to a reliable bullpen that ranks ninth in ERA and 12th in WHIP. That should be enough to let this game stay Under the number.

So many Jays are mashing at the plate right now, Vladimir Guerrero Jr., Teoscar Hernandez, Alejandro Kirk, heck, even Ramiel Tapia is crushing it right now, but my favorite value in this game is for Teoscar Hernandez to go Over his total bases prop at plus money.

An oblique injury early in the season really stunted Hernandez’s performance but the Blue Jays outfielder is starting to look like the guy who won back-to-back Silver Slugger awards each of the last two seasons.

Hernandez was hitting .333 with a 1.035 OPS over his last nine games heading into the All-Star break and carried that momentum into the series against the Red Sox. He went 6-for-12 with three extra-base hits in that series, going Over 1.5 total bases in all three games, and now gets a nice matchup against Pallante.

Bet on Teoscar to keep swinging a hot stick in this one. 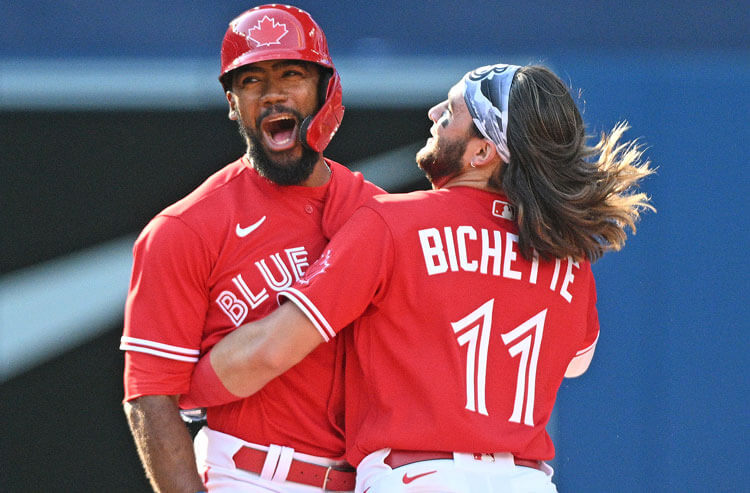