With Spencer Strider desperate to bounce back from the worst start of his season and Aaron Nola as solid as ever, our MLB betting picks are expecting this divisional showdown to be a very low-scoring affair — especially in the game's early goings.

We have a terrific pitching map on tap tonight when the Philadelphia Phillies meet the Atlanta Braves for Game 2 of a three-game series.

Last night was a thriller that saw a late three-run home run by Bryson Stott be the difference in a 6-4 Phillies win.

It was a win that snapped a three-game losing streak for Philly and closed the gap in the NL East between the Phillies and Braves to nine games.

Who will take the second game of this series? Find out in our MLB picks and predictions for Monday, July 26.

The Braves opened today as -130 favorites. Since then, the money has gone in the other direction, and the Braves have fallen to -120. The Phillies are returning around +110. The total opened up at 8 and has fallen to 7.5.

Spencer Strider (4-3, 3.03 ERA): Strider has been a strikeout machine and currently leads the league in strikeouts per nine innings with just over 13. Strider was coming off one of his worst starts of the season when he gave up five earned runs to the Nationals. I'd argue it was as unexpected of a start for any pitcher that we've seen this season. Even with that included, Strider has an ERA hovering around 3.00 in July. The walks have been a problem for Strider, with a walk percentage that ranks near the bottom. Outside of that, virtually all the peripherals for Strider point to an elite pitcher, including an xERA that is around 2.80. As it's become well-known around the league, Strider is a heavy fastball pitcher, with the four-seamer making up over 68% of his arsenal.

Aaron Nola (6-7, 3.13 ERA): The similarities between these two pitchers are glaring. Nola is also a heavy strikeout pitcher having more Ks on the season than Strider. There is some argument to be made that Nola should have a slight edge over Strider. His xERA is at 2.74 and points to someone that has had a bit of unluckiness, even if he's had a pretty impressive season. What's hurt Nola the most is a barrel rate that ranks among the bottom of the league. It's caused him to have three starts surrendering multiple home runs, including one to this Braves team. July has been the worst month of Nola's season so far. Before an eight-inning scoreless performance against the Miami Marlins, Nola had a five-earned run start against the St. Louis Cardinals.

The Under is 6-2 in Atlanta's last eight games vs. teams with winning records. Find more MLB betting trends for Braves vs. Phillies

Tonight, we have as good of a pitching matchup as you'll find. Because of that, it makes the edge between these two teams hard to define. This matchup will likely be decided by a run or two, so a tiny mistake can be all the difference. With that said, we're going to roll with the Phillies and the plus-money value.

Aaron Nola is 2-0 against the Braves this season. One of those wins was a direct product of his pitching, and the other wasn't. None of those games, however, came against Spencer Strider, so it's hard to put too much stock in it.

Still, Nola has had his way with Atlanta this season, minus the odd homerun. He's taking advantage of their league-leading 29% whiff rate and has had 18 strikeouts combined in two starts against them. This pitching matchup may not be an edge, but you feel good about Nola being reasonably dominant.

It's a bit loose case, but perhaps Strider is hitting something of a rookie wall? There are reasons to entertain the theory, at least. He will continue striking guys out, but teams are sitting on his fastball and seem to know where he will locate it.

This Phillies lineup is decorated top-to-bottom with guys that can hit the fastball. While Strider's fastball is no ordinary one, it's tough to pass that angle up. Depending on how the lineups shake out, the Phillies could have up to six players with an above-average run value against four-seamers this season. That's well over half the lineup.

This moneyline should be priced at -110 both ways with my projections having the Phillies winning 51% of the time. It's entirely possible that if Atalanta were the underdog here, then I'd be backing them.

As it stands, though, it's the Phillies who come into this one in that role. I can't pass up that price in a divisional game for a home dog.

I have more conviction on this side than I do picking the winner. However, I happily support the Under as my handicap and projections see a massive edge here.

Although I think if there's an edge here to be had between in the pitching matchup, it favors the Phillies, but it's not by much. It's hard to envision Strider getting banged up against a team that has above average swing rates.

There's also the situational aspect working in Strider's favor. He's coming off his worst start of the season and is now appearing against a divisional rivalry that just won last night. So you back him in those situations.

Likewise, for Nola, he's done quite well against the Braves this season, and there's a reason for it. The simplest is that he has a K rate that ranks in the Top 15% of all qualified pitchers, and Atlanta has the worst whiff rate in all of baseball. Those two things generally combined equal a lot of outs.

So while it's challenging to see Strider getting banged up, it's nearly impossible to see it happening to Nola, granted that keeps the ball inside the ballpark.

My projections see the biggest edge here in the first five innings market. Both pitchers are elite, and one has a pretty good matchup. The other is coming off one of his worst starts of the season and hasn't had back-to-back bad starts all season.

I have this one going Under the posted total around 65% of the time, which gives us a considerable edge on the posted number.

We've talked at length about the pitching matchups here, and while we see value in both players' strikeouts, we like backing them to be extra sharp early.

Nola hasn't given up a run in the first two innings in three consecutive starts — the last time being to this Braves team on a home run. While that's always a risk, he's improved his home run issues significantly over the last month.

Likewise, before his previous start against the Nationals, Strider hadn't given up a run in the first two innings in four consecutive starts. So, we have the added benefit of the bounce-back angle, which generally has been profitable for Strider.

We see this as a very low-scoring intense divisional game. The price of two scoreless opening innings is mispriced for the quality of pitchers going tonight and the situational aspect. 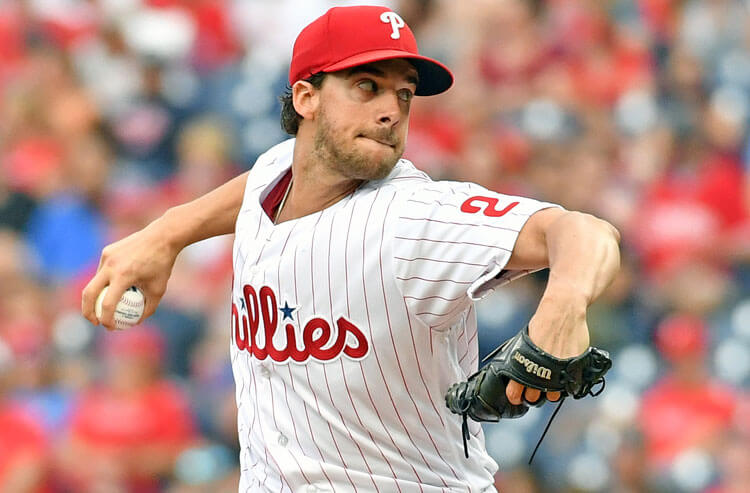