Braves vs Phillies Picks and Predictions: Bombs Away for Series Opener

Ronald Acuna Jr. has 17 of Atlanta's MLB-leading 86 homers. The Braves will look to continue their homer-happy ways as an underdog against Philadelphia. Can they get to Philly ace Aaron Nola? Find out with our best picks for the series opener.

After a slow Monday in the baseball world, we have a 15-game betting slate on Tuesday, including the start of a three-game set between the Atlanta Braves and Philadelphia Phillies at Citizens Bank Park.

The NL East rivals are separated by half a game in the standings and are set to meet for their fourth series already this season.

Who has the edge for the series opener? Find out with our best free MLB picks and predictions for Braves vs. Phillies on June 8.

Drew Smyly (2-3, 5.98 ERA): Smyly hasn't been able to find his groove this season after a sparkling five-start 2020 season that earned him a one-year, $11 million deal. After a terrible April that he finished with an 8.05 ERA, the lefty strung together three solid starts in a row to begin May but has followed that up with a pair of clunkers. Home runs have been the biggest issue for Smyly, who has surrendered multiple bombs in five of his 10 starts, including against the Phillies when he faced them back on April 11.

Aaron Nola (4-4, 3.84 ERA): Nola has trended in the wrong direction after a strong first month of the season, and has particularly struggled with the long ball in recent outings. He's posting a superb strikeout-to-walk rate of 5.20 that's the best of his career but he fanned a season-low two batters his last time out, and opponents have reached base against him at a .348-clip over his last five starts.

The Over is 4-0 in the Braves' last four games as a road underdog. Find more MLB betting trends for Braves vs. Phillies.

Nola will be facing the Braves for the third time this season, hoping it goes more like his first start than the last one.

The Phillies ace got pummeled for five runs on five hits over a season-low four innings when he faced them back in May after kicking off the season with a strong Opening Day start versus the rival Braves. That May 9 loss to Atlanta actually ignited what has been a poor run for Nola, who has a 5.40 ERA over his last five starts in which opposing batters have hit .292 off him and put up an .829 OPS. Philadelphia has won only once over that five-start stretch.

Nola has allowed homers in all but one of those contests and runs into a team that tagged him for two in that last outing, in addition to one when they met on April 1. This is what the Braves do — they beat up on teams with the long ball.

As good as Nola is, and he is plenty good, with strong advanced metrics to back that up, Atlanta has a powerful offense that can do damage in any ballpark — especially a hitter-friendly environment like Citizens Bank Park.

This is a tough matchup for Philadelphia's No. 1 arm. Although the club has a clear starting pitching advantage for the series opener with a shaky Smyly getting the ball for the Braves, the Phillies aren't the worst opponent for the southpaw and they aren't worth the -161 price tag. Take the Braves at a great price as an underdog.

We're not necessarily calling for Nola to get lit up, but we expect the Braves to be able to do some damage against him. And once they are through with Nola, they'll get to unleash on a bullpen that struggles to put away hitters on strikes, has a 4.54 ERA, and has the second-highest home-run-to-fly-ball rate in the majors.

That's not a good combination against a Braves team that leads the majors in homers behind MVP contender Ronald Acuna Jr.'s 17, which accompanies his .984 OPS (fourth in MLB). Atlanta is second in HR/FB rate, sixth in OPS, and eighth in runs per game — in other words, bank on them to hit the ball and send some out of the yard.

The Phillies, meanwhile, aren't hitting lefties for power and they get punched out at the third-highest rate in baseball versus southpaws. They have a Top-3 K rate, period, and one area Smyly has shown some promise in, albeit inconsistently, is missing bats. That said, he will have to face some big boppers in Bryce Harper and Rhys Hoskins, and enters the start allowing an unsightly 2.70 homers per nine innings, which is the highest mark in the majors among pitchers who have thrown at least 40 innings.

Atlanta's bullpen has been even worse from a run-prevention standpoint and these two groups are basically a wash, with the Braves having more punchout ability. Like Smyly, their bullpen arms can capitalize on the Phillies' swing-and-miss tendencies, which is helpful for the moneyline pick, but their 4.78 ERA is what matters when it comes to the total.

The Over has cashed in five of the last six head-to-head meetings and it's the clear play for this game. 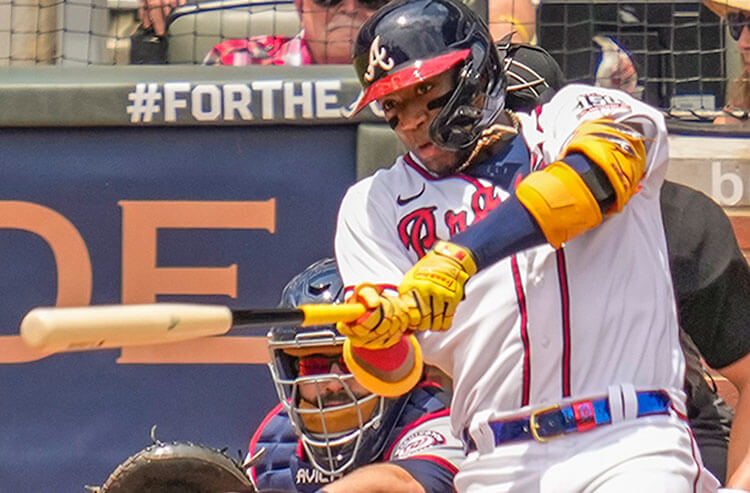 Braves vs Phillies Picks and Predictions: Bombs Away for Series Opener
Provided by

Dodgers vs Braves NLCS Game 1 Picks and Predictions: Do Dodgers Have Enough in the Tank?
Zachary Cohen | Jan 1, 0001