Two of MLB's best offenses meet a pair of hot lefties in a pitching matchup featuring Carlos Rodon and Robbie Ray. Can the underdog Jays take the series opener versus a Chicago club that's dominant at home? Find out in our Blue Jays vs. White Sox picks.

Two of the American League's heavy hitters kick off a three-game set at Guaranteed Rate Field on Tuesday, with the Chicago White Sox hosting the Toronto Blue Jays at 8:10 p.m. ET.

These powerful lineups won't have it easy, though, as a pair of strong southpaws in Robbie Ray and Carlos Rodon get the ball for the series opener.

Which lefty has the edge? Find out with our best free MLB betting picks and predictions for Blue Jays vs. White Sox on June 8.

The line opened at Chicago -141, with the total at 8.5. Early action has favored the White Sox, while the Over/Under has held firm. Check back later for a full report from Patrick!

Robbie Ray (3-2, 3.57 ERA): Ray has been brilliant in his first full season with Toronto, reestablishing himself as a strong middle-of-the-rotation arm thanks to his ability to better find the strike zone. The typically wild Ray has cut down on his walks while still punching out batters at a high clip, leading to the best strikeout-to-walk rate of his career. Ray bounced back from a rough outing against the Yankees by delivering six solid innings against the Marlins in his last start, walking two and striking out nine.

Carlos Rodon (5-2, 1.98 ERA): The southpaw has put some injury-plagued seasons behind him and is having a breakout at 28 years old. Rodon hasn't slowed much since throwing a no-hitter in his second start of the season, as he has allowed one earned run or zero in seven of his nine starts. One of the two he didn't, though, came in his last outing when he was tagged for an uncharacteristic three bombs and five runs on nine hits to Cleveland.

The Under is 6-0-1 in Rodon's last seven starts versus AL East teams. Find more MLB betting trends for Blue Jays vs. White Sox.

Not many people ahead of the season would have predicted that a Robbie Ray and Carlos Rodon pitching matchup in June would be a doozy, but that's exactly what we have here.

Both lefties have been pleasant surprises this year and been among the top starters on their clubs. The talent has always been there for both pitchers but control problems have been one common thing that has held them back. Each starter has corrected that, with both turning in career-low walk rates. That has helped Rodon lead the White Sox's starting staff in WAR, while the strikeout artist Ray looks like an absolute steal on a one-year, $8 million deal.

As good as they've been, these teams aren't pitcher-friendly matchups for any arm. The Blue Jays, behind MLB home run leader Vladimir Guerrero Jr., lead the AL in bombs, while the first-place White Sox have the top on-base percentage in baseball at .341.

What tips the scales for this matchup, though, is that no team hits southpaws harder than Chicago. And no team plays better on its home field, with the White Sox entering this series with a 23-10 record at Guaranteed Rate Field, including a mark of 9-2 over its last 11.

The Blue Jays offer great value at plus money, but the lefty-mashing White Sox behind the stud Rodon at home are too good to pass up.

Two very good pitchers going up against two great offenses — which side do you lean on for the Over/Under? Let's start with some facts.

In addition to clubbing more homers than any AL team, Toronto ranks second in the majors in OPS, fifth in OBP, and sixth in runs per game (one spot ahead of the White Sox).

Chicago, meanwhile, ranks well across the board in most relevant categories and has the best offense in baseball against lefties according to FanGraphs' weighted runs created plus, sporting an MLB-best 131 wRC+. The ChiSox also lead in slugging and OBP and rank third with a .276 batting average. They are a nightmare for left-hander pitchers, but Ray is no pushover.

The lefty carves up hitters with an above-average four-seamer and hard breaking stuff that he generates plenty of misses on, with whiff rates of nearly 50 percent on both his slider and curveball. With improved control, that has turned him into a major threat against any lineup and allowed him to work deeper into games.

The exact same can be said for Rodon, but he's been even better. The former first-round pick murders hitters with one of the game's best sliders and can touch upper-90s with his heater. Lefties can't hit him and righties haven't done much, either, leading to a sparkling 0.82 WHIP.

Once Rodon is done, Chicago will then turn to a bullpen that has the best strikeout percentage in the AL and the lowest walk rate, which helps lead to a Top-3 FIP in the majors. Toronto will be up against one good arm after another.

The Under has cashed in 12 of the combined 19 starts that Rodon and Ray have made and, as powerful as these lineups are, both teams have gone Over in fewer than half their games. The White Sox are cashing Overs at the fourth-lowest rate in baseball and we like good pitching to bottle up these dynamite offenses tonight. 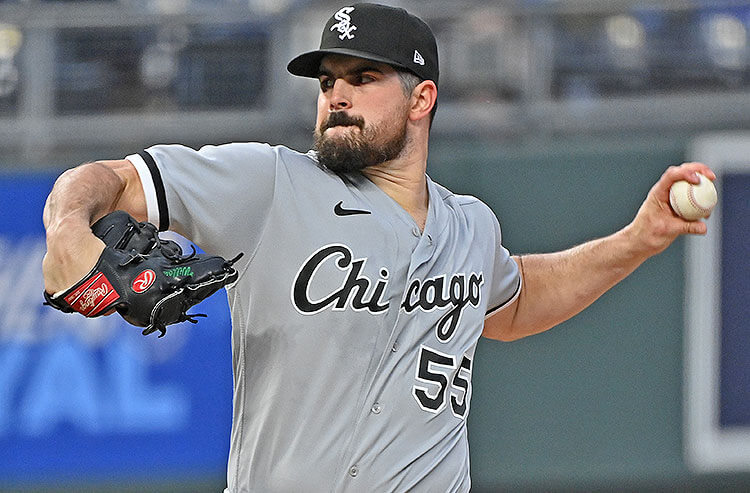