Between the pitching matchup and stadium conditions, today's tilt between the Braves and Phillies has all the makings of a scoreboard-breaker. See why we're backing fireworks with our MLB betting picks as these NL East foes decide their three-game series.

The Atlanta Braves and Philadelphia Phillies will wrap up a three-game set in the City of Brotherly Love on Wednesday afternoon, splitting the first two of the series.

We wrote yesterday that the Phillies would be in a good spot if Aaron Nola could keep the ball inside the ballpark. Unfortunately, his homerun issues reappeared and were the catalyst in the Braves' 6-3 win.

Who will win the series? Find out our MLB picks and predictions for Braves vs. Phillies on Wednesday, July 27, 2022.

The Braves opened today as -150 favorites. Since then, they have taken a bit more money and fallen to -155 across the board. The Phillies return at the price of +145. The total opened up at 8.5 and has stayed there.

Charlie Morton (5-4, 4.20 ERA): It seems weird to suggest that Morton may be the weak point of this Braves pitching staff, but it sometimes feels that way. He isn't the same guy he was a season ago. The right-hander has looked his age (38 years old) for perhaps the first time in his career.

That said, June has made you wonder if Morton has one more season of near-dominance in him. Or at least one more half-season of it. He's posted a 2.52 ERA this month, and if you take out a rocky appearance against the Mets, he's given up just two runs in 20 innings.

What's hampered him the most is too many hard-hit balls. His exit velocity, barrel, and hard-hit rate are below average. What's been missing the most from his game is an electric curveball. The run-value on his curve went from -22 a season ago to an even 0 this season.

Kyle Gibson (5-4, 4.69 ERA): It's been a reasonably rocky season for Gibson. He started the month giving up six earned runs to the St Louis Cardinals in four innings, then followed it up with a seven-inning scoreless appearance against that same team.

That's been the typical pattern for Gibson, a horrific start followed by a solid start with the bad starts outweighing the good ones. He's coming off one of those heinous starts against the Chicago Cubs, where he gave up six earned in four innings.

Gibson is a problematic pitcher to handicap. He's probably due for some slight positive regression in the second half of the season, but teams are hitting his most popular pitch, the best. The sinker makes up 30% of his arsenal, and teams are batting for an average of .290 against it. If he can clean that up, he'll make some strides as we go down the stretch.

The Over is 8-0 in the Braves’ last eight overall. Find more MLB betting trends for Braves vs. Phillies

There is some mystery surrounding both these two pitchers. Kyle Gibson has the second-lowest WHIP of his career, but it hasn't followed from an ERA perspective. Charlie Morton is in the midst of the worst season of his career, but lately, he's looked more like himself. I'll go with the trusted commodity in the Atlanta Braves to take care of business. I'll look to the First Five market as I feel it is the strength of this handicap.

The central part of this handicap can be looking at a single pitch for each pitcher and seeing what the opposing team does against those pitches. For Gibson, it's concerning. We talked about how his preferred pitch is the sinker, or pretty much breaking balls in general. Two breaking balls make up over 50% of his pitching arsenal, which can squarely put him in the category of a "finesse pitcher."

Virtually all of the Braves' numbers improve against finesse pitchers. Most notably, their OPS is around .832, one of the best in baseball. Against the sinker exclusively, the Braves will have up to six players in their lineup that hit over .300 against it. Both are massive edges, and Braves batters seizing on the breaking balls will be one of today's main stories.

The reverse of this is Charlie Morton and his curveball. It's not been as effective this season as it has been throughout his career. The problem for the Phillies, though, is that without Bryce Harper or Jean Segura in the lineup, they don't have many players capable of hitting the curveball well.

The lone major threat against this pitch in their lineup is Bryson Stott. He hits the cover off these pitches and would be a good look in the prop market. However, that's not enough to push them over the edge, particularly when you have big bats like Kyle Schwaber and Nick Castellanos who struggle against it.

I price the Braves having the lead after five innings at -122. You can approach this one or two ways and take the first five moneyline or the first five runline. I see the most value in the former.

This matchup has the feel of an Over game with two pitchers on the mound that have been beaten up of late — the likelihood is that one of them has a pretty rough outing. While we're backing that to be on the Phillies' side, we'll take the full game Over and back that both give up a reasonable amount.

We've talked our fair share about the pitchers and their issues. The thing that sticks out the most is that both pitchers have had problems with their barrel rates. Like it was yesterday, conditions will be favorable for the long ball. It will be hot and winds will blow out to the right field. Yesterday, we saw four home runs, which were big assists to the total going Over — I'm expecting something similar today.

The pitching already speaks for itself. Both of these guys on the mound will give up hard hits. When you factor in the stadium conditions, the probability of those hits being converted into runs increases.

My projections agree with this overall premise, and I price the Over at around -140. That gives us a nice edge today.

I will double down on the Over as my Best Bet here. Many combinations of things are coming together that make you think the runs come today. Even the trends agree:

Roll with the runs today—the trends and pitching matchup point to it as the Best Bet of the game. 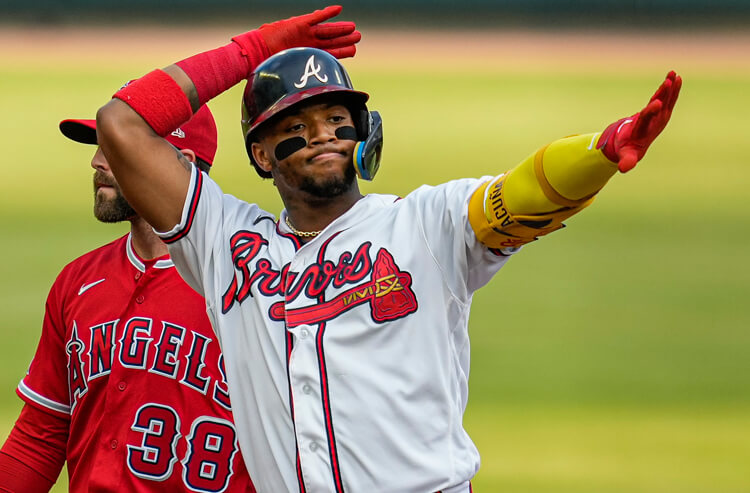 Braves vs Phillies Picks and Predictions: Pitching Matchup Helps Fuel Over
Provided by