After snagging two games against the division-leading Astros as sizable underdogs, the A's now send a more-than-formidable Cole Irvin to the mound for the series finale. As such, our MLB betting picks are expecting somewhat of a similar result.

The Oakland Athletics have won as +180 and +150 dogs in the first two games of a three-game series vs. the Houston Astros.

Can Cristian Javier right the ship and salvage the series despite struggling with control and coming off a start that was worse than the boxscore indicated?

Read our free MLB betting picks and predictions for Astros vs. Athletics to find out.

The Astros opened as -200 favorites and moved to -210 overnight. The total has also seen some movement after it opened at 7.5 and currently sits at 7. Yesterday’s total closed at 6.5 at some books.

B) No Run First Inning: White Sox-Rockies, Astros-A's, and Giants-Diamondbacks BOOSTED to +625 at Caesars! Claim Now

Cristian Javier (6-5, 3.13 ERA): Javier averages 12.42 strikeouts per nine ninngs which is a Top-3 mark in the American League. However, his 3.67 walks per nine innings is one of the worst marks in baseball for starters. He’s a flyball pitcher when players do eventually make contact and he is a true three-outcome pitcher. His last outing looked good on paper with just two hits allowed over five innings vs. the Yankees but Javier was pitching from behind through most of the game and struggled with command again.

Cole Irvin (5-7, 3.08 ERA): Irvin is coming off one of his best starts of the season where he went seven innings and allowed just one run and struck out eight. The lefty still only lasted 84 pitches, however. Irvin’s usage can vary as he’s been held to under 85 pitches in six of his last nine starts. The Oakland starter has seen the Astros three times this season (twice in July) and has gone 17 2-3 innings, allowed 14 hits and four earned runs — Houston still won two of those three games.

The Under is 6-1-1 in the Astros’ last eight road games vs. left-handed starters. Find more MLB betting trends for Astros vs. A's

Astros vs A's picks and predictions

The Astros have dropped back-to-back games to the Athletics as heavy favorites thanks to some weak starting pitching. Jake Odorizzi gave up six runs over five innings including a five-run fifth that the Astros couldn’t overcome and then Luis Garcia gave up a four-run fourth inning last night that sealed the Astros’ defeat.

Cristian Javier will start tonight for the visitors and although he can flash elite stuff, his command can be such a problem at times that Houston could find themselves playing from behind again tonight.

Javier gave up just two hits and one run versus the Yankees in his last outing but the right-hander labored heavily through that game with four walks, a hit batter, and threw just 57 of his 99 pitches for strikes. Javier can get a very long leash at times and his groundball rate is terrible so the double-play ball is hard to get for the Houston starter when he allows traffic.

Javier only went four innings in his only meeting in Oakland this season back on May 31. He is a tough pitcher to trust as a heavy road favorite because his struggles are well-documented.

The A’s will be competent on the mound with Cole Irvin getting the ball. He has seen some elite competition this month (HOU x2, TOR, and TEX) and has recorded at least 18 outs in each game, allowing two or fewer runs in all four outings.

The Oakland lefty has seen the Astros three times since June 1 and has compiled a 2.03 ERA with a sub-1.00 WHIP. Irvin is the perfect pitcher to ride as a heavy underdog in a pitcher-friendly park. He’s in great form and has the Astros’ number over a three-game sample size across a relatively recent stretch of time.

The Oakland bullpen has also been consistent of late as Lou Trevino is putting it together and plenty of these arms are auditioning to get traded to a contender right now.

This afternoon’s total has fallen to 7 which is just the third time Javier has seen a total below 7.5 this season. One of those games was a 6.5 total versus Shohei Ohtani which finished with the Angels winning 7-1 two starts ago.

With how many runners Javier allows on base via the walk, sweating another Under is not something I want to do again after doing it in his last start vs. the Yankees. The Oakland offense isn’t a Top-20 unit, but it has shown in this series that they can knock around some decent Houston starting pitching with 16 hits and walks and 10 runs over 10 2-3 innings. As such, I'm pivoting to team totals instead of a full-game total.

Offensively, Houston sits 22nd in on-base percentage vs. LHP and although they have the No. 12-ranked slugging offense vs. southpaws, Oakland Coliseum is swallowing up balls today. Today’s setting plays as the toughest park for hitters on the slate and is the No. 1 run-suppressing park in baseball.

Houston’s best hitter, Yordan Alvarez, doesn’t hit LHP as good as he does RHP while Jose Altuve, Alex Bregman, Yuli Gurriel, and Kyle Tucker are a combined 10-for-58 vs. Irvin which equates to a .172 batting average. That's not a tiny sample size either in head-to-head matchups for the strength of the Houston line, especially with most of those at-bats coming this season.

With the Astros possibly priced a little high for a game that the books and I think will be a low-scoring affair, we’re getting a little value on the Houston team total Under 4.5.

With Irvin and this extremely pitcher-friendly park today, the Oakland lefty should be able to keep this game competitive, and with the total sitting at 7, this is projected to be a low-scoring game.

Javier is coming off his lowest strikeout performance of the season and his two-hit, five-inning outing was much worse than his stat line indicates. His walks are free bags for the Athletics who have covered the +1.5 RL in four of the last five meetings.

The pitching matchup isn’t a huge disadvantage for the home side and thanks to what I feel is a short price on Houston this afternoon, the RL is projecting well. Irwin has held his own versus Houston this season and today’s conditions give him another advantage. 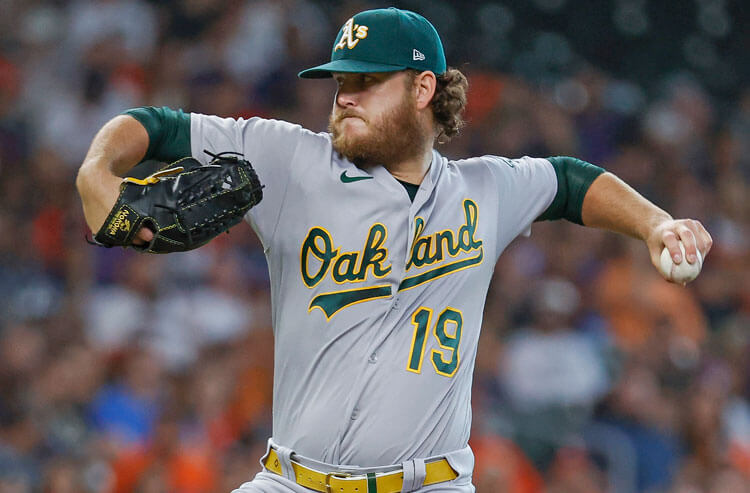