Jordan Montgomery has been strong at home (2.75 ERA) and will look to pitch the Yankees to a series win over Oakland on Sunday. The underdog A's will counter with Sean Manaea, who has been on a tear. Find out who we like in our A's vs. Yankees picks.

The New York Yankees and Oakland Athletics meet at Yankee Stadium at 1:05 p.m. ET for the rubber match of their three-game set.

A pair of left-handers will get the ball, with Jordan Montgomery going for New York and Sean Manaea countering for Oakland.

Who will come out on top in what has been an exciting series thus far? Find out with our free MLB betting picks and predictions for Athletics vs. Yankees on Sunday, June 20.

Sean Manaea (6-2, 2.99 ERA): Manaea has been on an absolute tear of late, as the lefty has given up one or fewer earned runs in each of his last five starts. The Athletics have also come away with wins in 11 of his 14 trips to the hill this year, and they’ll be banking on him to turn in another nice effort against the Yankees here. Manaea has also been great in a small sample size at Yankee Stadium, where he has pitched 12 scoreless innings.

Jordan Montgomery (3-1, 4.20 ERA): Montgomery has given up seven earned runs over his last two starts, but the Yankees have actually won in seven of his last eight outings. Also, the lefty is 2-1 with a 2.75 ERA when pitching at home, and it’s really his 5.71 ERA on the road that has caused his numbers to look a bit mediocre this year. The 28-year-old doesn’t have the most impressive stuff in the world, but he knows how to get guys out.

A's: Stephen Piscotty OF (Out), Trevor Rosenthal RP (Out).
Yankees: Luke Voit 1B (Out), Aaron Hicks OF (Out), Darren O’Day RP (Out), Justin Wilson RP (Out).
Find our latest MLB injury reports.

The Yankees are 4-1 in their last five games against AL West opponents. Find more MLB betting trends for A's vs. Yankees.

Manaea has been lights out in his few trips to Yankee Stadium, but he has had some trouble against some of these Yankee hitters in the past.

Aaron Judge is 3-for-7 with a homer and three RBIs against him in his career, while Gio Urshela has also taken the lefty yard. Judge is batting .347 with five homers and 11 RBIs against lefties on the year, and Urshela is at .288 with two homers, five doubles, and seven RBIs against them. That shows that the two of them are very effective against southpaws, so it might not be a fluke that they’ve made things happen against Manaea.

Don’t be surprised if either of them drives in a run or two in this game, and they aren’t the only ones that are capable of doing damage.

Montgomery, meanwhile, has been unbelievable at Yankee Stadium on the year. The lefty has turned in quality starts in four of his six starts at home, and he has a couple of downright dominant outings to his name in the Bronx. He might not be able to completely shut down this Oakland offense, but he should be able to do a bit better than the other starters have in this series.

At the very least, Montgomery's style of pitching should be able to keep Matt Olson from going wild here. Olson is not as good against lefties as he is against righties, and Montgomery doesn’t give him the pace he needs to crush the ball. If New York can keep him in check, this game should lean in the Yankees' favor.

The Athletics have hit the Over in six of their last seven games, and the Yankees have also gone Over in nine of their last 12. Both of these teams have had their fair share of offensive explosions in that time, but the scoring should dip a little in this one.

Manaea has been incredible in his recent trips to the mound, and Montgomery has been awesome at Yankee Stadium. Also, while most of the tickets in this game are on the Over, it seems as though the sharp money is on the Under — the line hasn’t moved at all, despite the action on the Over.

That makes this one seem like an easy call, despite the fact that these are two good offenses. 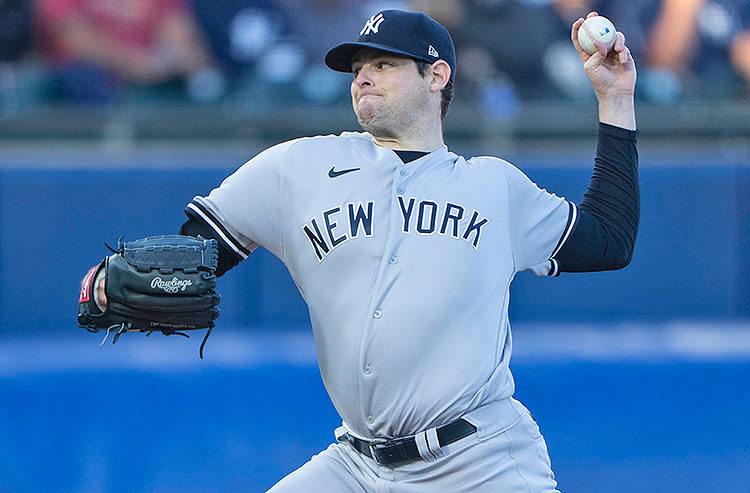 A's vs Yankees Picks and Predictions: Southpaws Clash in Bronx Finale
Provided by