A's vs Padres Picks and Predictions: Kaprielian vs Paddack Gives Oakland The Edge

Two of the best non-first-place teams in baseball square off when Oakland visits San Diego. We're expecting tonight's game to come down to pitching, where the A's have the edge — and our MLB betting support.

We have a full slate of 15 games on the MLB betting board today, ending with an interleague matchup between the Oakland A's and San Diego Padres.

This is the first contest of a short two-game set at Petco Park in San Diego and the A's enter as +125 MLB betting road underdogs.

Here are our best free A's vs. Padres picks and predictions for Tuesday, July 27, with the opening pitch scheduled for 10:10 p.m. ET.

James Kaprielian (5-3, 2.65 ERA): Kaprielian was drafted 16th overall in the 2015 MLB Draft but had struggled to establish himself due to injuries, including Tommy John surgery in 2017. He has finally been given a rotation spot this season and has taken hold of it, pitching to a 1.12 WHIP and holding opposing hitters to a batting average of .202 in 12 starts. In his last outing, Kaprielian threw six innings of shutout ball against the Angels.

Chris Paddack (6-6, 5.17 ERA): After putting together a very nice rookie season with San Diego in 2019, Paddack has regressed in each of the last two seasons. He has pitched to a 1.30 WHIP with an OBA of .270 through 87 innings this year. That said, he's coming off a strong performance on the road in Atlanta, where he held the Braves to three hits and zero runs in five innings of work.

The Under is 7-1 in the A's last eight games overall. Find more MLB betting trends for A's vs. Padres.

Both of these squads are having successful seasons, with the Padres boasting a 58-44 record and the A's going 56-45. Unfortunately, they happen to play in some very competitive divisions... so Oakland is trailing the Astros by five games in the AL West while the Friars are 5.5 games behind the Giants AND 3.5 games back of the Dodgers in the NL West.

Oakland comes into this series having lost three in a row against the Mariners while the Padres return home after dropping back-to-back contests in Miami.

The Padres have the best hitter on either side in NL MVP favorite Fernando Tatis Jr., who leads the league in home runs (30) and OPS (1.016). That said, San Diego's team OPS of .738 is only marginally better than Oakland's .715.

This game will likely come down to pitching and while San Diego has the best bullpen in the majors, starter Chris Paddack has struggled. The righty has a 5.17 ERA in 18 starts this year and has allowed at least four earned runs in three of his last six starts.

Oakland will give the ball to rookie James Kaprielian, who has looked very sharp this season, pitching to a 2.51 ERA across eight starts since the beginning of June. The Padres have been terrific at home this season but the A's are a solid 26-21 on the road and with the edge in starting pitching, they have value as the underdogs tonight.

Kaprielian has allowed two or fewer runs in nine of his 12 starts and while San Diego has been hitting the ball very well lately, it tends to have a tougher time scoring runs in the pitcher-friendly confines of Petco Park, averaging a modest 4.40 runs per game.

While Paddack has been less than impressive this season, the Padres relievers have sizzled, leading the majors with an ERA of 3.01. They should be able to limit an A's lineup that is plating just 3.77 runs per game over the last 30 days.

Plus, not only is Petco Park considered one of the most extreme pitchers' fields in the majors — but there is a wind of 8.6 mph blowing in from center field tonight.

With the Under going 7-1 in Oakland's last eight games and also cashing in five of the Padres' previous six contests, expect this game to go below the total of 8.5. 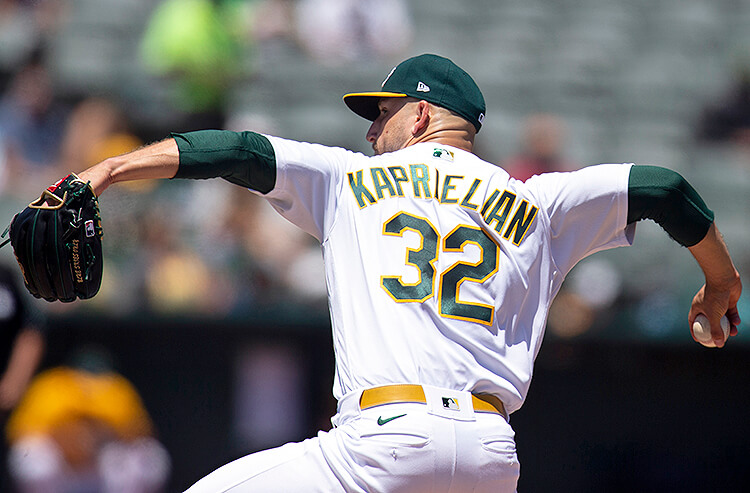 A's vs Padres Picks and Predictions: Kaprielian vs Paddack Gives Oakland The Edge
Provided by