Jake Paul vs Tyron Woodley Picks: Paul Gets the Win, Woodley Gets Paid

After dumping retired MMA fighter Ben Askren in an April boxing match, Jake Paul faces another former MMA fighter in Tyron Woodley. This is a slight step up in competition, but Woodley has never boxed — meaning we like the favorite Paul to win... again. 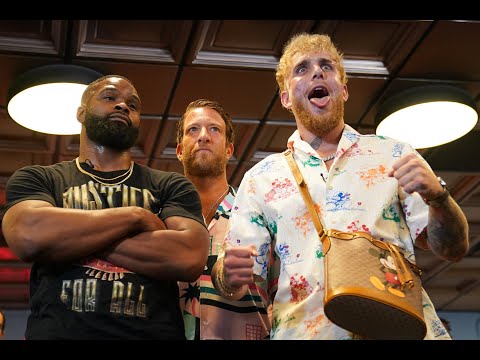 Jake Paul built his empire posting pranks on YouTube but when it comes to his next venture — boxing — it would seem the 24-year-old isn’t playing around.

Oddsmakers aren’t joking either, setting Paul as a -225 favorite versus former MMA champ Tyron Woodley (+162) in Cleveland, Ohio on Sunday.

Paul, not to be confused with his brother Logan — who just paid Floyd Mayweather Jr. $100 million (so says Floyd) to piggyback him for eight rounds — is a deserving favorite and a promising pugilist… if he’s taking this seriously.

Here are betting picks and predictions for Jake Paul vs. Tyron Woodley.

If you ignore all the noise that Paul brings to the ring and just get down to the boxing basics, it’s clear why he’s the chalk Sunday night.

This bout is scheduled for eight 3-minute rounds at a weight of 190 pounds, which is 20 pounds heavier than Woodley’s preferred weight class at welterweight (170 lbs). Paul’s last opponent, MMA fighter Ben Askren, struggled with that weight and came in looking like he just finished Thanksgiving dinner at his aunt’s house.

Woodley enters Sunday in much better shape, if the pre-fight hype videos are any evidence, and told reporters he naturally trains at 205 pounds. While he won’t have to shed as much as his MMA days, the 190-pound mark is still an uphill climb for the underdog. Woodley stands just 5-foot-9 and is being asked to lug extra poundage in a boxing bout, that requires superb cardio and finesse.

Paul, on the other hand, is 6-foot-1 and looked carved up for his match with Askren. While he finished his foe in just under two minutes, he showed patience and caution in that opening round while also doing a great job moving his feet — cutting off the ring and relying on his length to land shots.

That reach advantage — which sits at two inches versus Woodley (76 inches vs. 74 inches) — is Paul’s biggest edge, especially early on. Expect Woodley to come out swinging and try to end this fight in Round 1, knowing the further it goes the worse his chances get. Paul can work behind the jab and clutch and grab when Woodley gets inside. Paul is the better boxer here and the only fighter in the ring with any actual boxing experience on his resume (sure, beating up on Nate Robinson counts).

Much like his pal Askren, Woodley is a wrestler by trade and wasn’t known as a stand-up striker in his time in the octagon. He often relied on counter striking and heavy-handed shots in retaliation but was never one to throw in bulk, scoring only seven of his career 19 victories via KO/TKO. On top of that, he’s trading out the four-ounce MMA gloves for pillowy 10-ounce boxing mitts — more added weight for Woodley to lug around.

And while we’re on gloves, it seems there’s a bit of a controversy around the gloves for this bout. Paul is sporting customized Grant gloves, used by many of the top fighters in the world, while Woodley was denied a pair of custom Grants by the manufacturer themselves, who told Woodley’s camp Paul forbade them from making his foe a pair. It could be an edge. It could be nothing. But it’s dirty deeds done dirt cheap by the Paul camp.

If Jake Paul can survive a first-round barrage from Woodley, he’s got this one in the bag.

Expect some boos from the crowd when Paul dances away from an aggressive opponent and people are going to get really pissed when Paul ties up Woodley whenever he gets in trouble in Round 1... But that’s smart boxing.

Woodley will come out stalking and throwing some wild bombs in those opening minutes, quickly punching his way out of this fight and leaving his arms heavy and legs cemented. As the minutes tick away, Paul will be able to pick at his opponent with his length and land some hard straightforward shots.

This prop is way too tempting at 9/1 not to toss something down.

As much as Jake Paul should be taken seriously as a fighter (and it’s hard when the guy has a robot in his entourage), this bout with Woodley is a business transaction and a stepping stone to bigger and more legit (and lucrative) matchups for the younger Paul brother.

Ben Askren made half a million for his “effort” versus Paul back in April and Woodley is a step up in competition — based solely on the fact he’s actually in shape coming into fight night. The 39-year-old “Chosen One” was cut by the UFC after four straight MMA losses and is rumored to be receiving a cool $1 million for Sunday’s appearance, so don’t dare think for a second this fight is about anything but money.

If Mayweather Jr. is willing to tarnish his legacy and carry a joke fighter like Logan Paul the distance, these two real fighters could stretch this bout to the judges’ cards, with Paul winning on points and Woodley saving face while securing the bag. He went to the cards in 11 of his 27 MMA appearances, including seven of his final 12 fights.

If Paul plays this fight right, he’ll avoid Woodley’s wild throws early on, work behind his jab and use his size and length to score points.

It’s not sexy, but it’s smart — and Jake has shown some boxing brains in his limited time in the ring (6 minutes and 44 seconds total to be exact). As the rounds go forward, Woodley’s defenses will drop, and Paul’s power shots will do damage.

In his 2019 UFC fight with current welterweight title-holder Kamaru Usman — the fight that sent Woodley into a four-loss spiral — he was outpaced by a more active opponent (beaten 336 to 60 strikes). While those strikes included elbows and knees, Woodley did little to defend them and ended up with a gash above his right eye.

Paul won’t be throwing bows out there on Sunday, but he’s going to get off a lot more punches than Woodley and we’re playing the odds that one splits his opponent open.

Where can I bet on Paul vs Woodley odds? 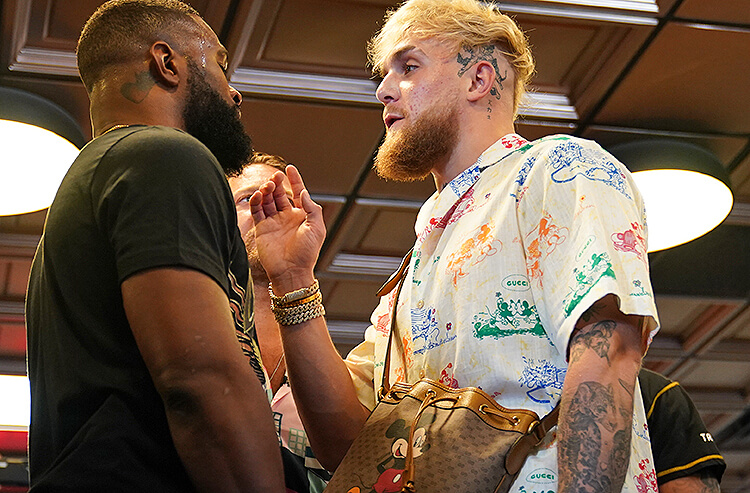 Jake Paul vs Tyron Woodley Picks: Paul Gets the Win, Woodley Gets Paid
Provided by