Tips for betting on WNBA odds

Don't overlook the WNBA odds when it comes to betting on basketball, because sharp bettors can beat the soft lines offered at sportsbooks.

WNBA betting doesn’t hold the same audience or excitement that its NBA brother does, but it sure as hell holds a lot more value. And value equals money.

If we’ve piqued your interest on how to bet on WNBA odds, here are a few basketball betting tips to help you win big against the WNBA point spreads and Over/Under totals.

Look at box scores, read some articles, and for God’s sakes, would it kill you to watch a WNBA game every now and then? Since the league gets about 1/18th the amount of coverage the NBA receives, any extra info you can get on a team, its players, and coaches is extremely valuable.

Often times, key injuries and lineup moves are undervalued by oddsmakers, so doing your homework can really pay off. Social media is also a gold mine, whether that’s local beat reporters or players themselves dishing actionable info for WNBA betting.

You’ve never seen line moves like the ones in the WNBA. Sharps hammer the opening numbers and push the spreads and totals all over the place. And because books know the only folks betting “The Dub” are the ones in the know, they’re aggressive with their adjustments.

If you can spot a line on the move, jump on that side and try to get the best number you can before the value is dried up.

Tip No. 3: Dig into the derivative WNBA stats

Like NBA betting, you aren't limited to spreads and totals for the full game in the WNBA. Most sportsbooks will offer derivative WNBA lines as well, meaning you can bet on first-quarter, first-half, and second-half odds.

Teams will have tendencies that play into these betting markets, such as slow starts or strong second-quarter defensive efforts. These stats can also be split by home and away production, allowing you to really focus on the impact of the schedule on WNBA teams. You can narrow those specific figures down to recent results in order to get a better understanding of the team heading into a game.

There are a number of WNBA stats resources out there, but the actual league site provides the most in-depth WNBA stats engine and allows multiple ways to slice and dice the analytics.

In smaller-market sports, betting trends tend to stick around longer than leagues that are under the microscope. That means that if WNBA road favorites keep covering or the Over is the hot play, you can go ahead and lean on that trend a little more than you would if it was happening in the NBA, where these patterns have a limited lifespan.

One trend that’s proved profitable in recent seasons is simply betting on the best teams and fading the worst – basic enough. From 2017-2019, teams that finished Top 5 in WNBA standings are a combined 293-234-8 ATS – covering at a 55.6 percent clip. The Bottom 5 teams in the league were a collective 225-277-8 ATS – coming through for WNBA pointspread bettors just 44.8 percent of the time.

TALK BETTING IN OUR WNBA FORUM

Why you should bet on WNBA odds

Like most small-market leagues, WNBA odds are ripe for the picking simply because the league flies under the radar of both books and public bettors.

Unlike the NBA or NFL, the lines aren’t as carefully crafted by sportsbook operators, so there’s a larger margin for error in those numbers. And without the wall-to-wall media coverage and analysis, news and notes don’t bubble up into the spreads and totals like they would in those bigger leagues.

While the casual bettor may turn their nose up to the WNBA and laugh it off as a bad bet (and you did, we heard you) the summer months are shark-infested waters with wiseguys looking to cash in on the WNBA. Ask any serious sports bettor, and they’ll tell you women’s hoops can be a gold mine if you know what to look for.

WNBA experts can be found everywhere

Don’t feel like fully committing to all that homework mentioned above? You can always source solid opinions from the Covers Community. Our WNBA posting forum is loaded with insight and analysis from dedicated “Dub” cappers, with their fingers on the pulse of women’s professional hoops.

You can also keep a close eye on our WNBA contests on Covers Contests. There you’ll find leaderboards with the hottest WNBA bettors. And why not jump into the action while you’re at it, and win some cash and prizes in our free-to-play contests.

How to bet on WNBA odds?

Much like the NBA, there are plenty of wagering options for WNBA bettors. Betting on the pointspread is one of the most popular bets, where you place a bet on whichever team you think will cover a certain number of points set as the handicap line.

Derivatives are another betting market offered at certain sportsbooks. Derivative betting allows you to place wagers for specific quarters or halves of WNBA action, with lines derived from the full game odds.

For those watching WNBA games live, live betting, also known as in-game betting, is another WNBA betting option. Live betting allows you to wager throughout a game with lines adjusting based on the current score and situation.

How to Understand WNBA odds

When betting on the pointspread in a WNBA game the favorite will have a minus (-) sign in front of their number, like the Los Angeles Sparks did in a 2019 matchup against the Dallas Wings.

This means that if you bet on the Sparks to cover the spread in this game you needed them to win by at least seven points for your bet to win. The opposite side of this line looked like this.

In this case, the Wings were the underdogs and if you bet on them to cover the spread, you would have won your bet either with a Dallas win or if they lost by seven points or fewer.

If you bet this game on the moneyline, the Sparks as the favorite would once again have a minus (-) sign in front of their number.

This means that you would have to bet $300 to win $100 on the Sparks outright winning this game. The Wings would be given a positive (+) sign in front of their number.

Where to Bet on WNBA odds

Many online books and casinos offer betting on WNBA odds. Check out the best sportsbooks available where you live. 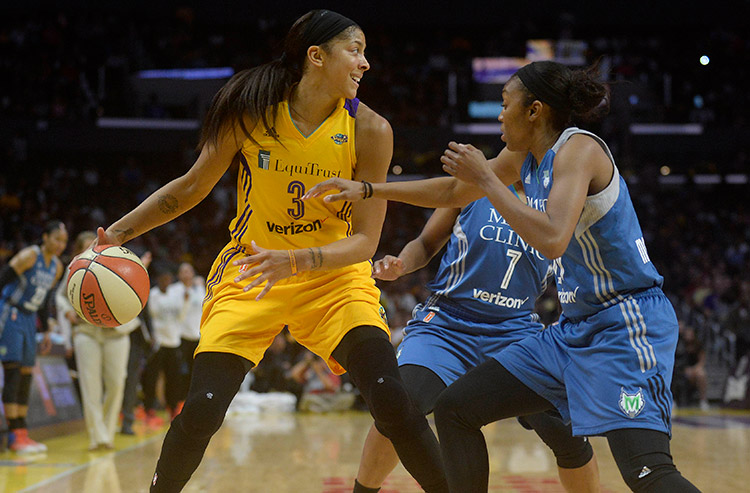 Tips for betting on WNBA odds
Provided by