The Sky came out uncharacteristically flat in Game 4, but facing elimination in front of their home crowd will make for a different story against the Sun in Game 5. Chicago's the better team, and our WNBA picks are siding accordingly.

After seeming ready to fall apart at the seams during a shaky Game 3 performance, many questioned whether the Connecticut Sun had the kind of championship mettle necessary to compete with the Chicago Sky. Game 4 then, where the Sun outplayed the Sky in every respect from the opening tip, was one hell of an answer. Fittingly, this evenly matched series will be decided in a win-or-go-home finale Thursday, September 7.

Game 5 of Sun vs. Sky sees the action return to Wintrust Arena, with defending champions hoping to rally following an uncharacteristic performance. Our WNBA picks and predictions foresee a bounce-back performance from Candace Parker and the rest of the Chicago Sky.

In terms of shocking single-game results, Game 4 wasn’t quite on the level of the Dallas Mavericks smoking the Phoenix Suns in Game 7 of the 2022 NBA playoffs — but it wasn’t far off. After struggling to find the bottom of the basket for three games, the Sun couldn’t miss when they entered the paint, finishing 56.9% on field goal attempts overall. The Sun also won the possession game in dramatic fashion, outworking the Sky on the boards to the tune of a 16-rebound advantage.

DeWanna Bonner deserves a great deal of the credit for setting the tone for Connecticut. Her energy on both ends translated into a ton of early offense, forcing turnovers and keying fast breaks that the Sun feasted on throughout. Her four steals led the game, and she also added 19 points on 7-13 shooting, tied for the game’s scoring leader with Courtney Williams.

So, does the dominant win in Game 4 indicate that Connecticut has finally exorcised the Sky-shaped demons that have been haunting them since last season's playoff series loss? I’m not so sure.

It is difficult to close out a team as good as Connecticut on the road, knowing that a loss sees the series shift to home court. The Sky seemed to come out playing in a daze, and the Sun, to their credit, took full advantage, functionally ending the game in the first half.

Candace Parker accounted for five of the Sky’s 15 turnovers, and her 3-9 shooting night was the result of being thrown a hand grenade deep in a few possessions where Chicago took far too long to get into their offense. It was a languid performance, and a puzzling one, but not one I foresee repeating in an elimination game.

I don’t think this is the new normal for this series, the Sun took advantage of a natural psychological advantage given both teams’ cadence in this series. That equilibrium changes again now, with the Sky presumably determined to end things in their barn on their terms.

This series has been anything but predictable, but I’m not willing to let the strange aberration that was Game 4 sway me from the belief that Chicago is the superior team.

When the chips are down, I like the Sky to win and advance.

When considering the spread for Thursday’s game, I’m looking at what was most replicable about the Sun’s performance in Game 4. Their control of the paint would seem the most logical because that’s Connecticut’s preferred style of play, but Chicago has demonstrated (outside of Game 4) that they have the capacity to slow the Sun down inside.

The Sun also had a fantastic shooting game, with Courtney Williams particularly effective at 9-14. Many of those were on the same diet of tough mid-range shots that had deserted her earlier in the series. While Williams is more than capable of replicating that kind of performance in any single game, against a fully-locked-in Sky defense, I’d say the balance of probabilities are against it.

Connecticut deserves a ton of credit for the way they imposed themselves physically early and often, but that kind of urgency is difficult to repeat. Not to mention that whatever malaise that hung over the Sky like a shroud should be well and truly gone, as they’re now playing for their playoff lives in front of their home fans.

Even with Game 4’s weirdness, the Sun are still just 3-7 against the spread in the last 10 meetings with the Sky, and that makes me lean toward a Chicago cover here.

Admittedly, I didn’t have the Sun scoring 104 points in Game 4 on my bingo card. It was particularly vexing as both these teams have been strongly trending towards Unders recently, with the Sky totals hitting the Under in five of their last six, and the Sun hitting in four of their last five.

Game 4 is the absolute limit of Connecticut’s offensive ceiling, and it was impressive to witness them put it all together against a team as deep as Chicago for a full 40 minutes. To me, it doesn’t change the defensive fundamentals of this series though, and bookmakers clearly agree, as they’ve finally seen fit to drop the total for this game significantly all the way down to 159.0 at time of writing.

Close-out games often make even good players play tight, and so I’d expect another low-scoring contest. I would have been interested if this number had stayed above 161.5 or so, but at 159 I’m not quite seeing the value in either direction.

Sun are 3-7 ATS in the last 10 meetings. Find more WNBA betting trends for Sun vs. Sky. 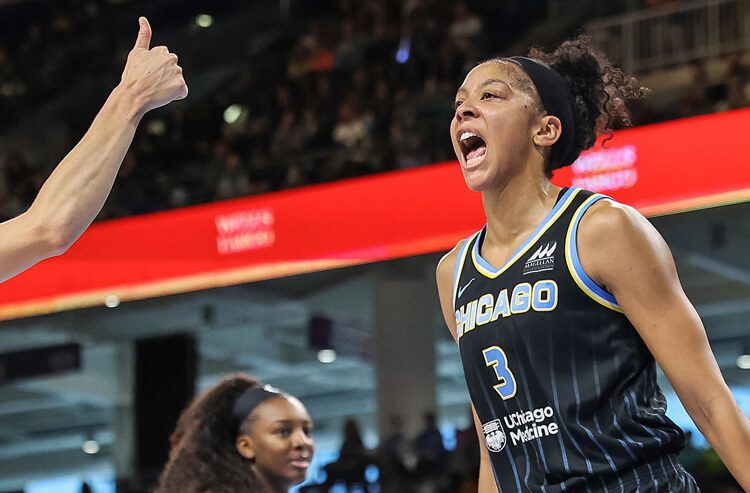