Despite being pushed to their limits by the Seattle Storm, the Las Vegas Aces are through to the WNBA Finals and have a handful of matchups to exploit against the Connecticut Sun. We break it all down in our WNBA betting preview below.

In the end, there can only be one. We’re approaching the finish line of the 2022 WNBA season, with the last two contenders having overcome all challengers and proving themselves against the best of the rest of the WNBA.

So it's the bruising Connecticut Sun and the smaller, more perimeter-focused Las Vegas Aces who will play a five-game series, with the winner capturing their first title in franchise history.

Game 1 of Sun vs. Aces tips off on Sunday, September 11. Our free WNBA picks and predictions zero in on the clash of offensive styles that will determine the outcome of this series.

As befits a title fight, these were the two best teams by net rating in the WNBA this season. The Aces came by their mark (+7.7) largely with their league-leading offense (109.6 offensive rating) while the Sun (+9.5) made hay by combining the league's second-best defense in the Sun (96.3 defensive rating) with the second-best offense (105.8).

Regular season stats are only one part of the story, however, as both teams now have a not insignificant playoff sample as well. Despite playing the Washington Mystics and Seattle Storm, who have a plethora of quality perimeter defenders, the Aces have seen their offensive rating skyrocket to 114.7 in the postseason. Connecticut has not fared nearly as well, seeing their offense plummet to 100.8.

Connecticut’s defense has been even better than the regular season, but by not nearly enough to make up for their offensive drop-off. In the regular season, the Sun’s net rating was 1.8 points better than the Aces, but so far in the playoffs, it is 6.1 points worse. This seems to suggest that the Aces, who arguably faced stiffer competition in their two playoff series, have a style of play more suited to playoff basketball than Connecticut.

Though such numbers are important, it’s better to think about this matchup in terms of styles and lineups. If the Sun can impose their style of play, by playing big minutes with the Jonquel Jones, Alyssa Thomas, and Brionna Jones jumbo trio, they’ll force the Aces to respond with more size.

That means more minutes from Dearica Hamby and Kiah Stokes, which in turn will cramp their spacing and slow their offensive tempo. In the regular season matchups between these two teams, Alyssa Thomas or other Connecticut players who drew the Hamby or Stokes matchups completely ignored them in the corner to crowd the lane. If those three can play serious minutes, in pairs and as an occasional trio, it will let the Sun dominate on the glass and flip the possession game enough in Connecticut’s favor to overcome the math advantage created by the Aces' 3-point shooting.

Conversely, the Aces broke out a small-ball unit against Seattle that basically hadn’t seen the floor in the regular season. The crucible of playoff basketball is the father of invention, however. The Storm pushed the Aces to the absolute limit, and Las Vegas ultimately won because Seattle had no answer for the five-woman lineup of A’ja Wilson, Chelsea Gray, Kelsey Plum, Jackie Young, and Riquna Williams. To play that group, Chelsea Gray has to match up with one of the Sun bigs, something she managed against the Storm, but might prove harder against Connecticut.

If Gray can survive the size mismatch on defense, the Aces' small-ball unit has zero players the Sun can cheat off, which means a clear paint for A’ja to create inside, for Chelsea Gray to isolate from the mid-range, or for Kelsey Plum to sneak in and attack the rim from the baseline. That group creates so much space that Connecticut will have to rethink their usual defensive principles, and I’m not confident that adjustment gets made in Game 1.

I favor the Aces in this game, as Las Vegas has proven the potency of their small-ball group and I’m uncertain the Sun have the depth of perimeter defenders to slow it down.

We’re certain to learn a lot in Game 1 but based on relative matchup advantages and their performance in the playoffs to this point, I like the Aces to cover Sunday.

The Sun are masters of forcing opposing teams into difficult mid-range shots. They’re also perhaps the best hedge and recovery team in the WNBA. Lesser teams wilt to the ball pressure while Connecticut scrambles back and comfortably concede the analytically-dreaded long 2-pointer. It’s one of the reasons they’ve been so good against the spread this regular season.

But the Aces have the firepower to make those mid-range shots into cleaner looks than most other teams, and they’ve demonstrated a borderline absurd ability to knock them down. Chelsea Gray has hit an astounding 63.3% of her mid-range field goals in the playoffs, and A’ja Wilson has hit north of 50% of her own. If the Sun’s defense is conceding those kinds of shots to those particular players, they’ll be in deep trouble.

Becky Hammon has shown a willingness to make aggressive moves early in a series to seize the initiative, such as when she rode A’ja Wilson 45 minutes against Seattle or her turning to the aforementioned small-ball lineup. Her ability to maximize her team's talent advantage is yet another reason I’d lean Aces against the spread in Game 1.

There are definitely some trends that warrant considering the Under in Game 1, but overall I’m quite bullish on the offenses in this series, particularly early on.

Yes, the Under is 8-3 in the last 11 meetings between the Sun and the Aces but much of that is prior to this season when the Aces totally reinvented themselves on offense under the tutelage of Becky Hammon. Many of those games also took place with Jasmine Thomas ball-hawking Chelsea Gray.

With Thomas absent for this series, the Sun lack a great matchup for Gray, whose combination of handle and physicality should allow her to get to her preferred spots and score on Sunday.

I believe the layoff between series is also a significant factor here. While the Sun are a deep outfit, the Aces are as thin as it gets. With Hamby still shaky in her return from injury, Las Vegas has five rotation players that I trust at this level.

That leaves a large offensive burden on the starters, and heavy legs might lead to downturns later in this series. It makes sense then that the over is 5-1 in the Aces' last six games playing on three or more days of rest.

The Over is 5-1 in the Aces' last six games playing on three or more days of rest. Find more WNBA betting trends for Sun vs. Aces. 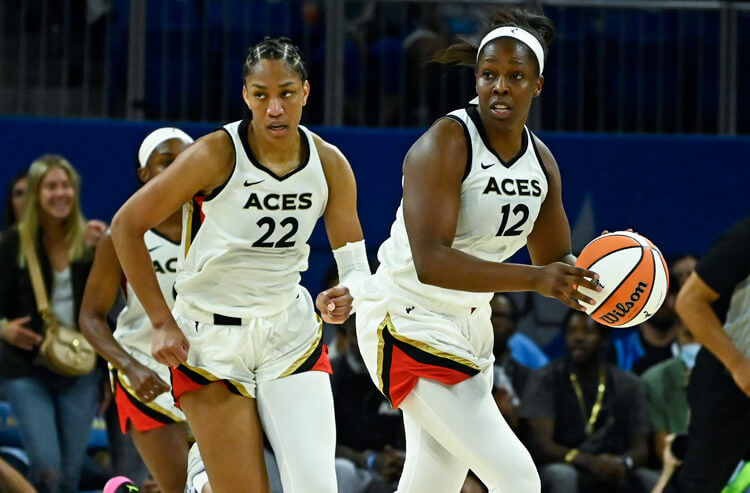