Chicago just came off a dramatic win over the WNBA's best team, and now the Sky are supposed to stumble against one of its worst? We're not buying it — find out why we can't get behind the Sparks as they battle the defending champs.

The Chicago Sky are coming off their biggest win of the season and head to La-La Land to play the Los Angeles Sparks on Thursday.

Chicago made a statement in Sin City on Tuesday, taking down the league-leading Las Vegas Aces and reminding the WNBA just who the defending champs are. Los Angeles also enters this contest off a victory, edging Washington to snap a three-game slide. These two clubs tipped off the 2022 season against each other, with L.A. earning an overtime road win back in May.

Here are our free WNBA picks and predictions for Sky at Sparks on June 23.

Odds via the Covers Line, an average comprised of odds from multiple sportsbooks. Compare WNBA odds before betting to ensure you get the best number.

The Over is 8-3 in Sparks' last 11 games overall. Find more WNBA betting trends for Sky vs. Sparks.

Sky vs Sparks picks and predictions

Things didn’t look great for the Sky early into their matchup with the Aces on Tuesday, giving up 41 points in the opening quarter before clawing their way back for a 104-95 victory as 8.5-point road underdogs in Vegas.

That sets up a dangerous letdown spot in Los Angeles tonight and could be why we see this spread sliding as much as two points, despite the Sky and Sparks playing on different levels and our Covers Consensus showing 69% of bets laying the road favorite.

But despite that strange line movement, I just can’t get behind this L.A. team. The Sparks are coming off a win over the Mystics, but Washington was without standout forward Elena Delle Donne for that contest and the Mystics are bad defensively without her in the lineup.

The Sparks have also struggled against the WNBA’s elite. Besides stealing an OT win in Chicago in the first game of the season, and taking down a shorthanded Washington team on Tuesday, Los Angeles has just four other wins, coming against teams with a collective record of 23-46 SU. They’ve fallen way short against top-tier opponents like Connecticut, Seattle, and Las Vegas by an average margin of almost minus-16 points.

The Sky come into this road game clicking. Chicago owns a net rating of +5.0 over the past five outings, with the offense doing the lion’s share of the work (110.9 offensive rating in that span). The Sky are getting production from all over and had five players score 13 points or more against the Aces on Tuesday, including 25 points from star guard Courtney Vandersloot.

Los Angeles has struggled on defense since late May, lugging a league-worst 111.8 defensive rating over its last nine showings while giving up just under 91 points on 46.7% shooting in that stretch. Late-game collapses have plagued this club at home as well, nearly letting Washington steal a win with 31 fourth-quarter points on Tuesday and giving up an average of 23.4 4Q points per home stand on the season.

The reverse line movement does make you nervous, knowing that WNBA markets are shark-infested water. But the threat of a letdown isn’t enough to steer me away from laying the points with the Sky tonight – though I'll play it safer with the outrights.

This Over/Under number has surged upwards with early play on the Over forcing bookies to tack on four more points to the total.

That opinion is justified, with Chicago not only firing with a deep offensive attack against one of the worst defensive teams in the league, but also the Sky showing some cracks in their ability to defend.

Chicago allowed 95 points to Las Vegas and has given up regulation point totals of 89, 91, and 86 in the previous four outings. The Sky have allowed foes to shoot almost 47% from the floor in that stretch and any lack of effort coming off that emotional win over Las Vegas could keep the scorekeepers busy inside Crypto.com Arena.

Chicago has been playing at an accelerated pace over the past five games, with the tempo ticking up to 99.04 versus 96.83 in the first 13 games of the schedule. The Sparks don’t shy away from tempo either, owning a 96.84 pace rating on the season, which has sped up to 98.70 in June.

We’re eating the worst of the number by betting the Over now, so perhaps look for other ways (Over L.A. Team Total?) to cash in on what should be a quick and high-scoring game.

Chicago opened as big as -300 on the moneyline at one sportsbook and that has been steamed down to as low as -185 with respected action jumping on the host Sparks.

Outside of any notable injuries that have yet to be reported (and the betting markets are often ahead of that news), the only reason I can give for this move away from Chicago is the potential letdown coming off that crazy comeback in Vegas two nights ago.

However, there is an aura of revenge at play for the Sky in this matchup, having lost the season opener to Los Angeles in overtime back on May 5. On top of that, veteran Sky forward Candace Parker also brings plenty of pride into this showdown, having played in L.A. for 13 years before coming home to Chicago to win a title last season.

She was out of action for Chicago’s June 5, 2021 date in L.A. last year, so Thursday marks her first game back in Los Angeles. Parker scored 21 in the home loss to the Sparks in the first meeting between these teams in May and has a point prop total of 13.5 tonight.

The Sparks have been known to keep things close inside the Crypto Dome, so we’ll pass on the point spread and take the discounted Chicago moneyline, knowing there is still plenty of motivation for the Sky.

Did you know that if you parlayed today’s WNBA Sky vs. Sparks predictions and picks in a single-game parlay, you could win $46.15 on a $10 bet? 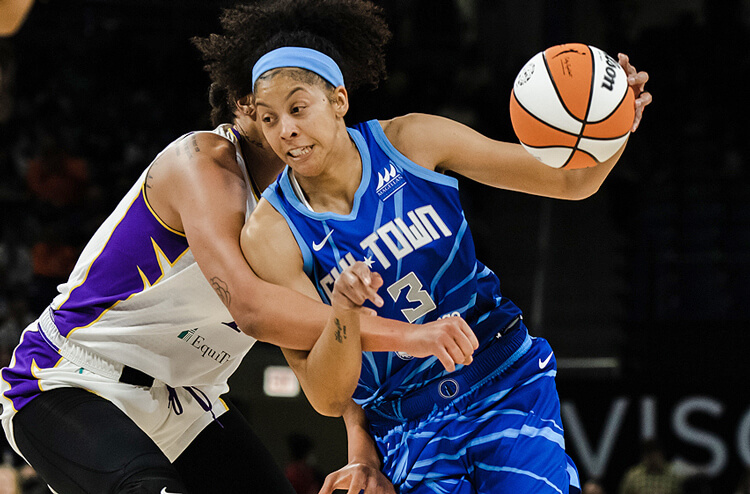 Sky vs Sparks Picks and Predictions: Chi-Sky Avoid Letdown in Tinseltown
Provided by