Aces vs Sun Game 3 Picks and Predictions: The House Still Wins on the Road

With the WNBA Finals shifting to Connecticut, the Aces arent getting as much credit from the books as they should. As a team that thrives on the road and has underperformed from long range, see why our WNBA picks are backing Vegas.

After being dragged into the mud by the Connecticut Sun in Game 1, the Las Vegas Aces made sure they played the way they wanted to in Game 2.

With former Becky Hammon mentor Gregg Popovich fittingly in attendance, the Aces fully embraced their San Antonio Spurs-like “beautiful game” tendencies on Tuesday. Las Vegas got loose right from the opening tip and never looked back, seizing control of the game in the first quarter and romping to a 85-71 victory.

The Sun are now on the brink of elimination, while the Aces are on the cusp of their first title in franchise history. Our free WNBA picks and predictions for Sun vs. Aces are backing Las Vegas to complete the sweep Thursday, September 15.

If Las Vegas skeptics were feeling heartened by the Sun’s ability to slow the Aces down in Game 1, they were given a bitter taste of reality in Game 2. All three of the Aces' top scorers (A’ja Wilson, Chelsea Gray, and Kelsey Plum) added 20 or more points and shot over 50% from the floor. No player on the Sun was able to respond in kind.

It was Plum’s game that really threw a wrench in Connecticut’s defense though, as she demonstrated that she could simply beat Courtney Williams or DeWanna Bonner off the bounce without needing a screen. The Sun defense is predicated on bringing a hard hedge during the pick and roll and aggressively helping off the weakest perimeter shooter to crowd the paint. But if there’s no screen needed in the first place, the Sun defense is no longer greater than the sum of its parts — then it’s talent vs. talent, and that’s a matchup the Aces have proven they will win.

Connecticut couldn’t even leverage their size like in Game 1. Despite playing significantly smaller units than the Sun, the Aces fought the Sun to a draw on the glass. That spells death for this Connecticut team, as their jumbo lineups have minimal outside shooting, and certainly not enough to keep up with even the Aces' most limited shooting groups featuring Kiah Stokes or Dearica Hamby.

Curt Miller is pretty clearly being outcoached as well. He’s playing a regular season rotation in the WNBA Finals, going eight players deep while none of his starters reached 35 minutes. In the parlance of The Untouchables, he still thinks he’s in a knife fight, while Hammon has long past brought out the big guns.

Here’s the really scary part for Connecticut though. The Aces shot 51.6% from the field overall, but they only hit six of their 26 threes — just 23.1%. The Aces were the No.1 overall team in the WNBA this regular season in terms of 3-point percentage at 36.1%, a mark they’ve topped in these playoffs (37.6%). Las Vegas has shot 11 of 50 on threes to start this series. That they’ve won both those games, and the second one handily, is bad news for Connecticut.

I expect the Sun to show more fight on Thursday night, but I’m also expecting it to not matter that much. I believe Las Vegas ends the series at Mohegan Sun.

This line has seen a little bit of, in my mind, puzzling movement. After starting the series as 6-point favorites and following up with -4.5 point favorites in Game 2, the Aces opened at -1.5 favorites for Game 3. That line doesn’t sound so off, as homecourt is worth in the neighborhood of two points. But the Aces are 8-2 against the spread in their last 10 road games. They thrive off silencing the road crowd.

Plus, the line has since been moving in Connecticut’s direction, and now the Aces are +1.5. I can’t see any justification for the Aces to be getting points at this stage of the series, and while I’d happily take them at +1.5, I’d also be tempted to wait until closer to tip-off to see if it moves any further before committing.

One thing that makes me confident with the Aces getting points has been the ongoing struggles of the Connecticut Sun’s perimeter players. After playing a critical role against the Chicago Sky, Natisha Hiedeman played just 15 minutes in Game 2 and went 0-3.

The Aces' smaller guards have also done an excellent job crowding DeWanna Bonner’s airspace and have forced her into a disastrous start to the series. She followed up a 1-9 shooting night in Game 1 with another 1-9 performance. Bonner is too important to the Sun offense for them to survive another performance like that.

Given what this Aces team has been capable of, 160.5 seems a modest total at face value. But as impressive as this Aces offense has been in the playoffs, they are still extremely top-heavy. Any drop-off from the trio of Plum, Wilson, or Gray all about guarantees the Under. That’s in part why the Under is 8-2 in Aces' last 10 games playing on one day's rest. This team demands more production from its star players than any other in the “W”, and that gets harder the longer a series goes on.

There’s also something to be said about this matchup that favors lower-scoring games.  The formula we saw in Game 1 could well indicate the tenor of a closely-fought Game 3. While the Sun had a great offense in the regular season, against the best teams, the Sun win on the defensive end. The Under is 7-2 in Sun’s last nine vs. a team with a winning record.

I’m thinking Game 3 will be a closer affair than Game 2, which is why I’d slightly lean towards the Under. 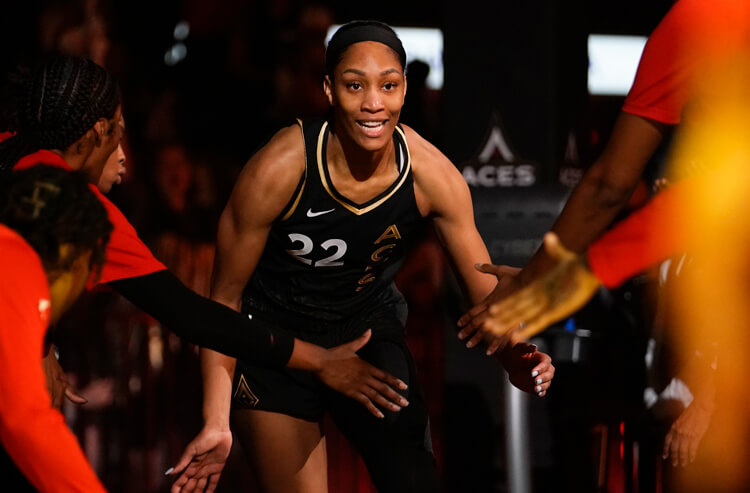 Aces vs Sun Game 3 Picks and Predictions: The House Still Wins on the Road
Provided by