A US Open victory would give Novak Djokovic the most career Grand Slam titles ever — and give him just the third calendar Grand Slam ever. Early 2021 US Open odds think he'll achieve the feat, as he's the odds-on favorite to win.

With the grass-court season behind us, all eyes in the tennis betting world are shifting back to hard court, with the final Grand Slam of the season — the US Open — quickly approaching.

US Open betting odds will likely shift quite a bit in the six weeks before the first round starts. One thing that shouldn't change, however, is Novak Djokovic being the heavy favorite as he looks for the single-season sweep of the Grand Slam.

With lots of action, injuries (and recoveries), and an Olympic tournament between now and the first round, this odds board will certainly change... but for now, here's the early look at the odds to win the 2021 US Open at the USTA Billie Jean King National Tennis Center, from August 30 to September 12.

Favorite to win the US Open 2021 men's championship

After cruising to his sixth career Wimbledon title, in which he lost just two sets the entire tournament, Novak Djokovic is the odds-on favorite to win the US Open at -120.

His win at the All-England Club gave the Djoker 20 career Grand Slam titles, tied with Rafael Nadal and Roger Federer for the most all-time. A victory at Flushing Meadows, which would be his fifth career US Open title, would not only give Djokovic the most career Grand Slam titles ever but also give him the calendar-year Grand Slam — something that's only been done twice ever and not since 1969.

World No. 2 Daniil Medvedev (+500) is second on the odds board. The 25-year-old Russian is coming off a fourth-round loss to Hubert Hurkacz at Wimbledon and is still searching for his first career Grand Slam title (he lost to Djokovic in the 2021 Australian Open Final and Rafael Nadal in the 2019 US Open Final).

Speaking of Nadal, he skipped Wimbledon due to rest, but appears prepared to play in the US Open and is currently third on the odds board at +650. Nadal, a four-time US Open champion, is also searching for history as a title here would put him in sole possession of the most career Grand Slams.

Defending champion Dominic Thiem, who withdrew from Wimbledon due to a wrist injury, is still not a guarantee to be healthy for this event but is currently fourth on the odds board at +700, while the Top 5 is rounded out by Alexander Zverev, Stefanos Tsitsipas, and 39-year-old Roger Federer, all tied at +1,000.

Favorite to win the 2021 US Open Women's Championship

Naomi Osaka has won two of the last three US Opens and is the current betting favorite at +450, but there's still a lot of uncertainty around whether she will participate at all. Osaka pulled out of both the French Open and Wimbledon due to a clash with the WTA surrounding her desire to not do post-game press conferences, and while she will play in the Olympics, the situation is still very murky.

That leaves current World No. 1 Ashleigh Barty (+700) as the next highest favorite to win the 2021 US Open. Barty is 35-6 on the season and is coming off her first career Wimbledon title. She had never gotten past the fourth round at the All-England club prior to her win, so she will be looking for a repeat as she has never reached the quarterfinals at the US Open either.

Sandwiched between Osaka's two recent US Open titles was a victory for Canadian Bianca Andreescu, who at +900 is tied for third on the odds board with the woman she beat in the 2019 finals, Serena Williams.

Andreescu is currently No. 5 in the World but has struggled in 2021, going just 12-7 and losing in the First Round of both Wimbledon and the French Open, plus a second-round exit in the Australian Open. Williams is arguably the greatest women's tennis player ever and has 23 career Grand Slam titles, including six at Flushing Meadows, but the 39-year-old Williams has not won a US Open title since 2014 — and hasn't won a Grand Slam title since the Australian Open in 2017.

Rounding out the Top 5 is a fast-rising youngster, 20-year-old Iga Swiatek, and a wily veteran in 29-year-old Simona Halep, both of whom are tied at +1,100.

Here are the US Open singles champions for the last 10 years, with Djokovic and Nadal (unsurprisingly) dominating the tournament with a combined six of the past 10 men's titles. On the women's side, there has been a different champion in five of the last six tournaments, and this year is shaping up to again have a new champion come the final Saturday.

How to bet on US Open odds

Tennis betting is most commonly done with moneyline odds for a match. Each player is assigned a moneyline price and bettors can wager on which one they think will win. Sportsbooks also offer futures odds for each tournament, where you can bet on which player will win that specific tournament.

Above we have posted the American odds for the US Open. However, these are easy to convert to decimal odds or fractional odds with our odds converter tool.

Where can I bet on US Open odds?

As the final leg of the conventional tennis season's four Grand Slams, most sportsbooks and casinos offer odds on US Open. Check out the best sportsbooks available in your region and see what tennis betting options they have available. 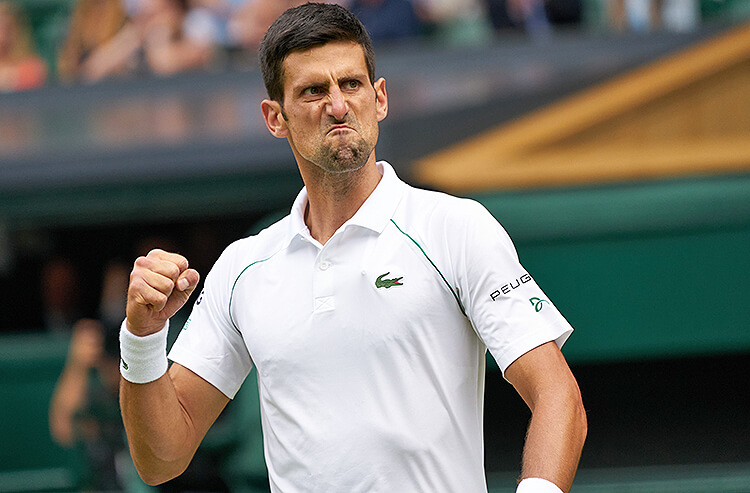