Tennis' first Grand Slam of the year is less than 24 hours away and with Djokovic out, Daniil Medvedev enters as the favorite. Meanwhile, women's world No. 1 Ashleigh Barty is the favorite over Naomi Osaka. Here are the latest odds for the Australian Open.

Australian Open odds are heating up, as the first Grand Slam on this year's calendar is less than 24 hours away. The 2022 tournament will run from January 17-30 at Melbourne Park.

We break down the field with odds to win the Australian Open for both men's and women's competitions.

With Djokovic out, the top spot on the Australian Open odds board belongs to Medvedev. The 25-year-old had his strongest year as a pro in 2021 when he reached the Australian Open finals - losing to Djokovic - and winning his first major tournament at the US Open (also against Djokovic).

The German is both third on the odds board and in the ATP rankings. He was in the mix at all four Grand Slam tournaments in 2021, reaching the semifinals at both the French Open and US Open. He'll look to do better than his career-best finish at the Australian Open, which was also a trip to the semis in 2020, where he lost to Dominic Thiem in four sets.

After injuries derailed much of Nadal's 2021, he's off to a roaring start in 2022 after topping Maxime Cressy at Melbourne over the weekend to ensure he'll finish 2022 with at least one ATP title for the 19th straight year. The former world No. 1 is ranked sixth overall entering the Aussie Open, a tournament he's only conquered once way back in 2009 when he beat Roger Federer in five epic sets.

Sinner, currently ranked 11th, is coming off his strongest year as a pro and could be poised for a breakout. He was dispatched by Denis Shapovalov in the first round of last year's tournament.

Stefanos Tsitsipas rounds out the Top 5. Tsitsipas reached the semifinals in last year's tournament before losing to Medvedev in straight sets.

WTA world No. 1 Ashleigh Barty rightfully enters the Aussie Open as the women's favorite at +300. While she was upset in the quarterfinals of last year's event, she won it in 2020 and went on to take the Wimbledon title last year, adding to her Grand Slam tally. And she's entering this year's tournament fresh off her second Adelaide International title after defeating Elena Rybakina in straight sets on Sunday.

Barty is followed by defending champ Naomi Osaka at +650. Osaka took chunks of last season off for personal matters after a withdrawal from the French Open and a painful collapse in the US Open. Despite the period away from competition, she's arguably the best on the planet when in peak form. However, that might not be the case this year as Osaka was forced to withdraw from the Melbourne Summer Set semifinals due to an abdominal injury. Keep an eye on her status leading up to the tournament.

The No. 3-ranked women's tennis player is also getting third-best odds. Muguruza won the 2021 WTA Finals in November in a straight-set victory over Annet Kontaveit. Barty, who had won that tournament when it was previously held in 2019, did not participate.

In the No. 4 spot is Iga Swiatek, who recently withdrew from the Sydney Classic to rest up for the Australian Open. The 20-year-old was eliminated in the fourth round of last year's event.

Anett Kontaveit and Simona Halep currently round out the Top 5 on the odds board, both tied at +1,400. Kontaveit's strongest career finish at a Grand Slam tournament came at the 2020 edition of the Australian Open when she reached the quarterfinals, losing to Halep.

Halep, a former world No. 1 in her own right, was sidelined by a variety of injuries in 2021 and finished outside the Top 5 in WTA rankings for the first time since 2013. She has two Grand Slam wins in her career, and reached the Australian Open finals in 2018.

How to Bet on Australian Open Tennis Odds

Tennis betting is most commonly done with moneyline odds for a match. Each player is assigned a moneyline price and bettors can wager on which one they think will win. Sportsbooks also offer futures odds for each tournament in which you can bet on which player will win that specific tournament.

Above we have posted the American odds for the US Open. However, these are easy to convert to decimal odds or fractional odds with our odds converter tool.

Who are the 2022 Australian Open favorites?

Who are the defending Australian Open champions?

Where is the 2022 Australian Open held?

The Australian Open will be held at Melbourne Park in Melbourne, Australia. 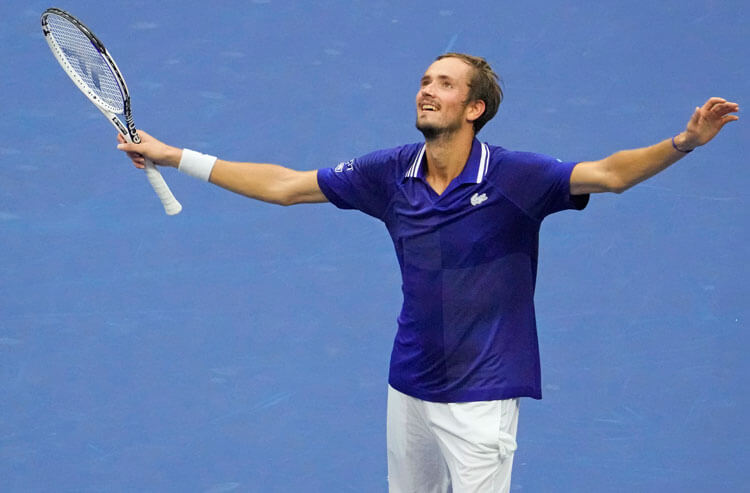 Australian Open Odds: Medvedev Favored With Djokovic Out
Provided by

Australian Open 2022 Preview and Picks: Can Osaka Get Third Crown Down Under?
Tennis Insiders | Jan 16, 2022