We're down to four at Wimbledon as the men's draw reaches a fever pitch. Find out how to get the best value from Friday's matches with our Berrettini vs. Hurkacz Wimbledon men's semifinal picks.

With the defeat of Roger Federer in the quarterfinal, Novak Djokovic is the only major winner still in the draw, and is now an even hotter favorite to claim a 20th major crown. Matteo Berrettini is the only other player with semi-final experience at this level, as Denis Shapovalov & Miami Masters champion Hubert Hurkacz enter the final four for the first time.

Berrettini was expected to produce a deep run and he didn’t disappoint, his winning streak on grass has extended to 10 and he’s won 22 of his last 24 matches on the surface. His dominance on serve automatically places pressure on his opponents, as they are deprived of rhythm, while his weaker backhand wing gets a high level of protection on this surface given the effectiveness of his slice, which zips through the court and stays low.

Hurkacz entered Wimbledon under the radar, the Miami Masters champion had lost five consecutive first-round matches, but has produced some big serving to fire his way into a first major semi-final. His victories against Medvedev & Federer have been particularly impressive and he’s gained some much-needed Center Court match time before his semi-final.

The head-to-head is 1-1 but the last meeting was over two years ago, both players have developed significantly since. Hurkacz moves incredibly well for a player of his height, he’s a penetrative ball-striker off both wings and can counter-punch effectively. This match looks set to be a serve fest: Berrettini leads the pack with 79 aces and both players have won 81 percent of first serve points. This match should be much closer than the odds suggest, Hurkacz’s return is arguably stronger than Berrettini’s and the lottery of tiebreaks seems likely. 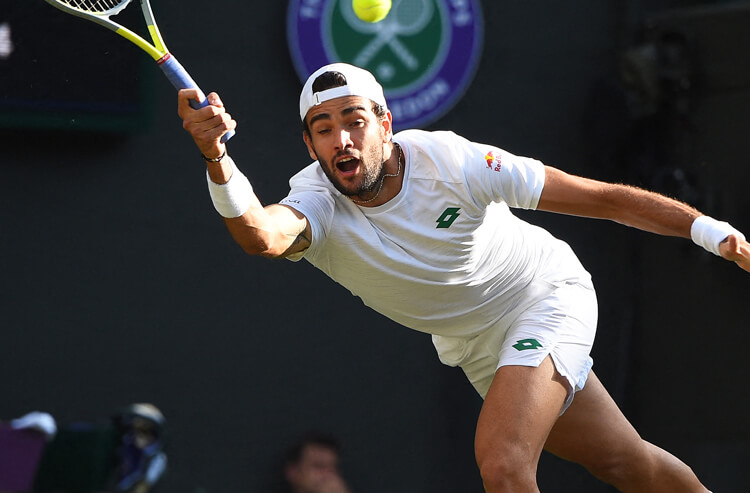 Berrettini vs Hurkacz Picks for Wimbledon Men's Semifinal
Provided by