Switzerland vs Cameroon World Cup Picks and Predictions: Shaqiri Strikes for the Swiss

Switzerland looks to start out the 2022 World Cup with a statement win against Cameroon. With the Swiss listed as the betting chalk in their opening game, find out where the betting edge lies.

Though the shadow of Brazil looms over Group G, both Switzerland and Cameroon are expecting to make some noise at the 2022 World Cup, starting with this crucial showdown on Thursday.

A well-balanced Swiss squad will be eager to build on an eye-catching run to the quarter-finals at Euro 2020 and a solid World Cup qualifying campaign that saw them sneak through ahead of Italy.

Meanwhile, Cameroon clinched a spot in Qatar in the most dramatic fashion, thanks to a Karl Toko Ekambi goal in the dying seconds of extra time. But a head-scratching recent loss to Uzbekistan means the Indomitable Lions arrive with weak World Cup odds.

Find everything you need to know in our Switzerland vs. Cameroon World Cup picks and predictions as we break down this Thursday, November 24 matchup.

Switzerland vs Cameroon picks and predictions

With Brazil on deck for their second game, the Swiss cannot afford to falter coming out of the gates — and an experienced squad will know the high stakes.

This game could come down to the talented midfield playmakers on both teams. Switzerland’s Granit Xhaka has been in outstanding form for Arsenal, while Xherdan Shaqiri remains a magician any time he puts on the national team jersey.

Shaqiri should be particularly well rested after his MLS season with the Chicago Fire ended on October 9, giving him ample time to train with FC Lugano and ensure he arrives in Qatar in peak condition. That freshness could make all the difference here.

But he’s not doing it alone in the final third. Switzerland has several scoring options up front, whether it’s Breel Embolo, Haris Seferovic, or Noah Okafor who gets the nod – and that should be enough to prevent Cameroon from crowding Shaqiri to limit his influence.

The 31-year-old has grabbed the headlines on this type of stage before. Back in 2018, he netted the dramatic last-gasp winner in a 2-1 victory over Serbia, then delivered the corner for the equalizer against Brazil. He stepped up again at Euro 2020 with three more goals.

In what should be an open, entertaining contest, I see Shaqiri playing his part and getting on the scoresheet.

Switzerland vs Cameroon side analysis

While a loss for either team could submarine its tournament hopes, I expect a combination of nerves and adrenaline to swing this game more toward an open, attacking clash than a defense-first scrap.

Switzerland enters as slight favorites here, in part due to UEFA Nations League wins over Spain and Portugal this year but also because of the greater experience and stability in its squad. For some of the Swiss core — including Shaqiri, Xhaka, Seferovic, and Yann Sommer &— this will be a third trip to the World Cup. As one of the tournament’s top stoppers, Sommer’s speedy recovery from an ankle injury significantly raises Switzerland’s ceiling here.

By contrast, Song has been thrown into a challenging situation, taking the reins after Cameroon’s disappointing African Cup of Nations performance. Having captained his country at the 2002 World Cup (and featured in the squad in 1994 and 1998), he knows what this is all about — and his team has absorbed its coach’s fearlessness.

With all the talent on show, these two teams have the potential to get Group G off to a high-scoring start. But that potential hasn’t always translated to goals, despite eye-catching approach play. Cameroon has looked short of ideas in the final third lately — scoring just twice in its four friendlies leading up to the tournament.

Vincent Aboubakar is expected to lead the line for the Indomitable Lions — and he can count on consistent service from a classy midfield. Striker Eric Maxim Choupo-Moting has made his case for more playing time with his recent form, but a 4-3-3 formation makes it tricky for Song to start both Choupo-Moting and Aboubakar.

The Swiss have questions to answer as well, following an underwhelming 2-0 loss to Ghana in a tournament tune-up. Murat Yakin, who was named Switzerland boss in August 2021, has brought the team out of its shell a little, but is this a team likely to score more than two goals unless the situation absolutely demands it? The Swiss haven’t done that since a 4-0 win over Bulgaria last November that clinched their ticket to Qatar.

The Under 2.5 total goals have some value here as both teams continue to find their feet. 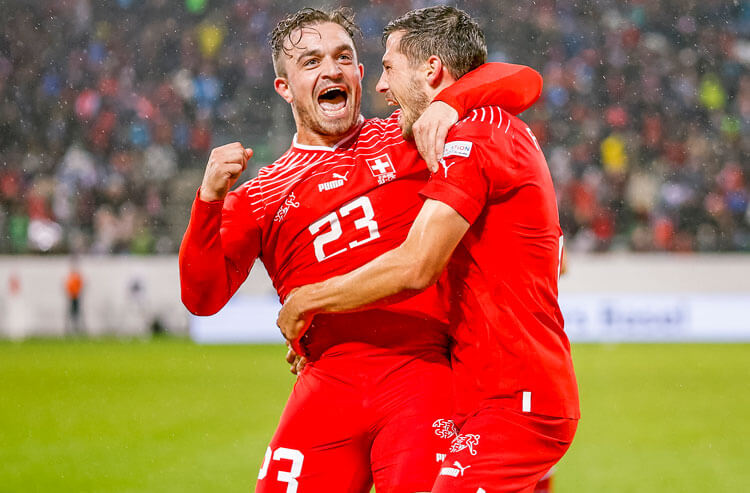 Switzerland vs Cameroon World Cup Picks and Predictions: Shaqiri Strikes for the Swiss
Provided by