Brazil haven't won a World Cup — or even reached the finals — since 2002 despite always being among the favorites. As Neymar inches toward the end of his prime, our Group G preview wonders if the Samba Boys can find glory vs. some stiff competition. 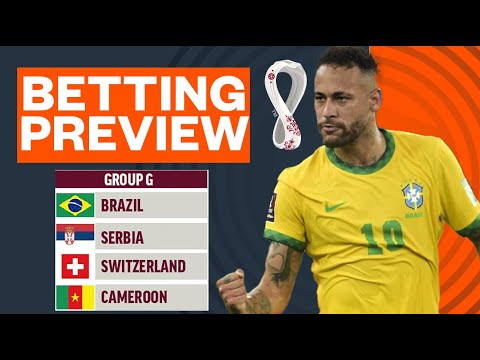 Don’t refresh your screen. If you think Group G looks familiar, that’s not a mistake. The 2022 World Cup features a group with three teams that were paired together at World Cup 2018 in Russia, and it sets up a terrific set of matches for the fans. Brazil, Switzerland, and Serbia are once again grouped together, and Cameroon joins the party in one of the tournament's more competitive pods.

The Samba Boys enter as the World Cup odds-on favorites to lift the trophy, while Switzerland and Serbia both feel they have what it takes to reach the knockouts. Can Brazil win the group as expected, or will the pressure of a 20-year drought weigh them down?

We break all that down in our World Cup Group G odds, predictions, and betting preview. And don't forget to check out our World Cup picks page for more insight.

At 30 years old, Neymar is nearing the end of his prime. Four years ago, he did all he could to lead his team to the promised land, but he was often let down by his teammates in attack. That won’t be the case in 2022.

Ranked No. 1 in the FIFA rankings, Tite’s 4-2-3-1 formation allows Neymar quite a bit of freedom in a roaming number 10 role, and he will be spoiled with options as to who he links up with to terrorize opposing defenses. The attacking group they take to Qatar is a who’s-who of top talent, starting with Real Madrid winger Vinicius Junior. Premier League stars Richarlison, Gabriel Jesus, Rodrygo, and Gabriel Martinelli will also be heavily involved.

If Brazil have a weakness in this tournament, it’s at fullback. Dani Alves refuses to vanish into the night, returning to the World Cup despite being just a few months shy of 40. They will also rely on Danilo, Alex Telles, and Alex Sandro on the outside, none of whom are what they used to be.

Nevertheless, Brazil have lost just once in their last 29 matches, and they scored 40 goals in 17 qualifying matches. They’re lethal going forward and will cause nightmares for anybody who has to try to slow them down. Not only should they win the group, but I expect them to win the whole tournament.

Player to watch: Neymar. Look, I could name a few different players here — Vinicius Junior is a very close second — but if Brazil are to lift their sixth World Cup trophy, it will be Neymar who takes them there. He was involved in nearly half of Brazil’s 40 goals in qualification, and he needs just three more goals to pass Pele for most all-time for the Brazilian national team.

Four years ago, the Swiss snuck into the knockout rounds after a 90th-minute goal from Xherdan Shaqiri gave them a critical win over Serbia. Sweden ended their tournament in the Round of 16, but it was a building block for a team full of budding talent.

Four years on, much of that talent has rounded into form. Their defense is one of the best in the tournament, a big reason why they conceded just twice in their eight World Cup qualifiers. They drew twice with Italy and won five of the other six matches with no defeats.

Premier League center-backs Fabian Schar and Manuel Akanji anchor the back line, and should anything get past them, it’s likely to be stopped by keeper Yann Sommer. The Borussia Monchengladbach stopper has been in stellar form of late and made a Bundesliga record 19 saves in a 1-1 draw with Bayern Munich in August. While he recently injured his ankle, he appears ready to go for the tournament.

Midfielder Granit Xhaka of Arsenal will provide the steel in the middle of a 4-2-3-1 setup, and Shaqiri will bring the creativity from the 10 role. But there are questions as to who will score goals. Breel Embolo has yet to really fulfill his potential, despite being one of the fastest players in Europe, but he’s in form with eight goals for Monaco this season. Meanwhile, Haris Seferovic has scored just once in his nine matches for the side.

Their advancement chances will likely come down to a heavily-contested match against Serbia. When these teams faced off in Russia, both Shaqiri and Xhaka celebrated by performing an Albanian nationalist symbol. The Serbian players have likely not forgotten, and things could get quite tense.

Player to watch: Jann Sommer. The hero of Euro 2020 for the Swiss, he led the tournament in saves and denied Kylian Mbappe a late penalty to eliminate France in the Round of 16. He’s stopped five straight penalty kicks for the national team during regulation, and that will get into the heads of anybody lining up against him in this tournament.

Serbia will be a different side than the one Switzerland faced four years ago. Gone are long-time stalwarts Aleksandar Kolarov and Branislav Ivanovic, replaced by a talented group of players who dominated their qualification by winning six of eight, including a 2-1 win at Portugal, while going unbeaten.

The Serbs vary their formations under manager and former player Dragan Stojkovic, but they always run a three-at-the-back setup typically in either a 3-4-3 or 3-5-2 formation. They have an established trio of center-backs in Milos Veljkovic, Nikola Milenkovic, and Strahinja Pavlovic and they conceded just nine goals in their eight qualifiers.

The biggest concern they have entering the tournament is the health of striker Aleksandar Mitrovic. The Fulham forward has been key to his side’s surge after gaining promotion to the Premier League, and his 43 goals set the single-season scoring record in the EFL Championship last season to spearhead their promotion. He’s the all-time leading scorer for Serbia, but he enters the tournament with a foot injury. That said, Stojkovic said his forward would play with only one leg if he had to, so I’d assume he’ll be good to go.

The man tasked with providing him service at the top is captain Dusan Tadic, the long-time Ajax midfielder who linked up with the striker four times during qualification. But it won’t just be Mitrovic who benefits. Juventus striker Dusan Vlahovic gives the side a lethal 1-2 combination of size and speed, should they be played together. Meanwhile, central midfielder Sergej Milinkovic-Savic of Lazio will be the man who links defense to attack and gives them a threat in the air on set pieces.

Serbia will deem anything short of advancing from the group as a failure, and they have a solid chance to do so. Serbia have lost just three of their 20 matches under Stojkovic, but their lack of depth could be an issue with so many matches in a short amount of time. Their lack of pace could also be an issue, given the speed possessed by Brazil and Switzerland.

Player to watch: Aleksandar Mitrovic. When he’s not playing against your team, he’s very fun to watch. The 28-year-old striker is also scoring goals for fun at the moment, with nine in 12 Premier League matches and 14 for Serbia over his last 13 competitive matches.

It’s been a great 12 months for Cameroon. They hosted the 2021 Africa Cup of Nations, in which they reached the semifinals before losing on penalties to Egypt. Then they qualified for the World Cup after missing the 2018 tournament, on the back of a 124th-minute goal in the second leg of their playoff tie against Algeria.

Now, they enter the tournament hoping to earn a point for the first time since the 2002 World Cup. They crashed out in both 2010 and 2014, scoring a total of three goals over six matches while conceding 14.

Rigobert Song leads a new generation of players back to the world stage, with a solid group of attackers led by striker Vincent Aboubakar of Saudi side Al Nassr. He will lead the line in a 4-3-3 setup, and he will need to carry over his form from AFCON last winter, where his eight goals won him the Golden Boot.

Andre Onana of Inter Milan will don the goalkeeper’s kit at the other end of the pitch, and he’s going to be needed in this group. The defense in front of him is not the most talented, and they will be heavily tested by the plethora of firepower in this group.

Cameroon isn’t likely to have much more success in this tournament than in the past two they’ve been a part of. They enter the tournament having lost two and drawn one of their last three matches, with just one goal in that span. Onana will do his best to keep them in matches, but he can only do so much with such a leaky defense in front of him.

Player to watch: Bryan Mbeumo. The Brighton winger is coming into the tournament on solid form, with two goals in his last three starts. A former French national player at every youth level, he just switched his registration to Cameroon in August after a meeting with legend Samuel Eto’o.

Group winner odds courtesy of PointsBet, as of November 17, 2022.

Brazil to reach semifinals (+100 at PointsBet)

If Brazil wins their group, and Portugal wins theirs as expected, it means Brazil would likely face Uruguay in the Round of 16. They would probably avoid Belgium in the quarterfinals, provided they also win their group as anticipated, and instead would face either Spain, Germany, or Croatia.

I like Brazil to beat every one of those teams. They have the speed to punish all four defenses, a solid enough defense, and talented keepers to keep their attacks at bay. That would set up a potential semifinals showdown with Argentina, which could be where their road ends. Tite has lost just five times as Brazil’s manager, and three of them were to their South American rivals.

As such, I love Brazil to reach the semis. I am personally betting on the Samba boys to lift their sixth World Cup — and first in 20 years — but barring injury to Neymar, or some other weird event, I see this as the earliest round where they could get eliminated.