Morocco shocked many when they captured the top spot in Group F. Meanwhile, Spain barely squeaked into the Round of 16, getting in on goal differential. With that said, our World Cup picks predict La Furia Roja to bounce back and win big. 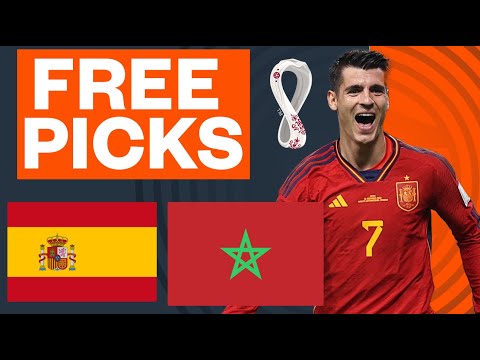 It's Spain and Morocco squaring off in the World Cup, with a spot in the quarterfinals at stake.

Spain's road to the Round of the 16 was relatively straightforward, even though it only included one win. In the tournament's first game, they registered a massive 7-0 win over Costa Rica, followed by a draw against Germany. Matchday 3 saw a loss to Japan, but it came in a match where Spain had little to play for and made notable changes to the Starting 11.

Morocco needed a win to confirm their spot in the Round of 16 on the final matchday, and they got it. After they opened the tournament with a scoreless match against Croatia, they defied World Cup odds and followed it up with back-to-back wins against Belgium and Canada to claim the top spot in the group.

What's the best bet for this matchup? Find out in our World Cup picks and predictions for Spain vs. Morocco.

Morocco vs Spain picks and predictions

Manager Luis Enrique was blunt and stern with his thoughts after the Japan matchup, noting that he believed his team had "nothing to celebrate" even after qualifying for the knockout stage. You'd back Spain on their best day to respond thunderously, and they're facing a side that should allow them to have one of their best days.

In the most straightforward terms, this Morocco team lacks a transcendent star, and they are reaching a stage in the competition where that's vital. Hakim Ziyech, Romain Saiss, and Zakaria Aboukhlal are fine players, but they aren't talents you'd think would take over a match.

On the other side, they face a team with plenty of star quality, from the young talents in Pedri or Gavi, to the veteran-tested strikers such as Marco Asensio and Alvaro Morata.

In more statistical terms, I expect Spain to dominate this matchup for two reasons. One of those is their prowess in the midfield. Gavi and Pedri essentially had a draw in their midfield battle against Germany, who fielded one of the best midfields in the tournament.

This was demonstrated by Spain nearly doubling Germany's number of passes in the attacking third. They also had an 85% passing success rate, including more than 35 long balls. Spain's midfield mastery should be on full display against Morocco. It's a bit simplistic, but in matchups against Croatia and Belgium, Morocco struggled to hold possession in the middle of the field. If they do that again against Spain, then they'll be punished repeatedly.

Speaking of being punished, the second part of this handicap are Morocco's defensive vulnerabilities.

They have faced some notable attackers over the calendar year and conceded goals. Roll back to their Africa qualification when facing Egypt and Mohammad Salah when they conceded two goals in a loss. How about the friendly against the United States, where they let three find the net?

The Belgium win has clouded the judgment on this team. There's no denying that it was an impressive showing, but the Belgians appeared very much like a team whose best years are behind them. The most damning stat in this matchup is that the Spanish are averaging 12 shots per game, and although they haven't conceded many, the Moroccans are allowing the second-most of any team remaining.

Spain are too clinical for them to be allowed to do that, and I expect a multi-goal win here.

Morocco vs Spain side analysis

We're rolling with the Spaniards to win big here. You can throw out plenty of numbers and analytics, but at the end of the day, there is a vast gulf in quality between these two sides.

Spain are looking to avoid their second straight Round of 16 defeat after falling in this spot in 2018. They have already faced teams such as Germany and Japan in this tournament. Their performances in those matchups were more impressive than anything we've seen from Morocco in this tournament.

I know Morocco has had a solid run, most notably with its 2-0 win against Belgium. However, I can't shake the thought of some of the performances they put together earlier in the qualifying stage where their defense looked suspect.

The story throughout this tournament has been second-half goals and, naturally, second-half Overs. I see no reason to play a pregame side on the total because, inevitably, they are cagy early in these matches and open up as the game drags on. Because of that, you get immensely more value betting a total live or just for a half exclusively, and I'm fundamentally against saying no to that value.

Second-half Overs have hit at around a 70% clip in the knockout stages. There are many reasons for this, but one is that we can feel the halftime adjustments from both sides. The most likely route I see this one going is Spain finding the back of the net in the first half due to a bad turnover in the midfield.

After that, Morocco will have to chase the game more in the later stages of the game, which will leave them exposed. I expect Spain to take advantage of that and score multiple goals. I'm seeing anywhere from a 3-1 to 4-1 scoreline here, and, of course, that would quickly cash the Over. However, I think the best action is to bet this live after the initial "feeling out period" or grab the Over at halftime.