Cameroon vs Brazil World Cup Picks and Predictions: Brazil Thrill Ahead of Knockouts

World Cup favorites Brazil have clinched their place in the Round of 16, with a Group G clash against Cameroon left to play. With the Indomitable Lions forced to go for the win, our World Cup picks are expecting goals all around.

Group G play at the 2022 World Cup will come to a close on Friday. While Brazil — the World Cup odds favorite — have already secured their place in the knockout stages, the other spot is entirely up for grabs.

For Cameroon to grab hold of that spot, they'll need to pull off the incredible and upset Brazil. Our World Cup picks highlight how the outlook in Group G will impact the betting landscape for Cameroon vs. Brazil.

Cameroon vs Brazil picks and predictions

Cameroon have the regrettable task of having to attack Brazil. It's not ideal, against the World Cup favorites, but it's the reality of Cameroon's outlook. A win is the only way they have a chance at progression and there's going to need to be an element of risk to their play because of that.

While a win — and, as a result, progression — is awfully unlikely for Cameroon, they could steal a moment of joy against the global powerhouse with a goal.

As Cameroon's 3-3 draw with Serbia in their previous game proved, this is a team well-equipped to play attacking soccer. They scored 14 goals at the African Cup of Nations — five more than the second-highest scoring team, Senegal — while leading in goals per 90 (1.91) as well, and finished as the fourth-highest scoring team in African qualifying.

Even in Group G play, against two of the best defenses in UEFA WCQ in Serbia and Switzerland, Cameroon have created chances at a high level as they rank eighth in expected goals per 90 (1.48) at the World Cup. Brazil don't boast elite talent anywhere across their backline but there's a particular weakness on the flanks, with both starters injured, which also happens to be where Cameroon funnel their attacks through.

Trying to play on the front foot and create chances against Brazil isn't without risk, and it's certainly not a risk that will go unpunished. Brazil will score and win against Cameroon, but the Indomitable Lions aren't going out without a fight.

Cameroon vs Brazil side analysis

At -275 on the 3-way moneyline, there's no appeal in backing the favorites.

There is, however, a lot of appeal in taking Brazil -1 (+100 at PointsBet), especially with Cameroon's need to attack from the first whistle. There will be plenty of chances for Brazil to strike in incredibly advantageous spots, and even a heavily rotated Brazil team will be clinical enough to capitalize.

Since the 2014 World Cup Brazil hosted, they've won five of eight group-stage games by multiple goals. They can close out this year's group play with another multi-goal win.

I'm expecting a fairly expansive, entertaining game due to Cameroon's need to win and the array of attacking talent Brazil can call upon at any point. As such, I have a pair of total goal picks I am looking to play, in addition to both teams to score.

The first is the Over on an alternate team total for Brazil of 2.5 (+150). On a good day, Cameroon's defensive reliability could be described as... suspect. They allowed the third-most goals at AFCON (6), which included conceding in the group stage against Burkina Faso (who they would later fall down 3-0 to in the third-place game), Cape Verde, and Ethiopia.

Now, they must continue without goalkeeper Andre Onana, who left/was sent home from the World Cup due to a dispute with the manager — which is just the latest in a tumultuous few years for Onana. However, it's a massive loss for Cameroon. On his day, Onana is among the world's best shot-stoppers, and his ability as a sweeper helped Cameroon play higher up the pitch. His absence will be glaring in this match.

So, with an expectation that both teams will score and that Brazil will go Over a 2.5-goal total, I am also going to hit the Over on an alternate goal total of 3.5 (+175). 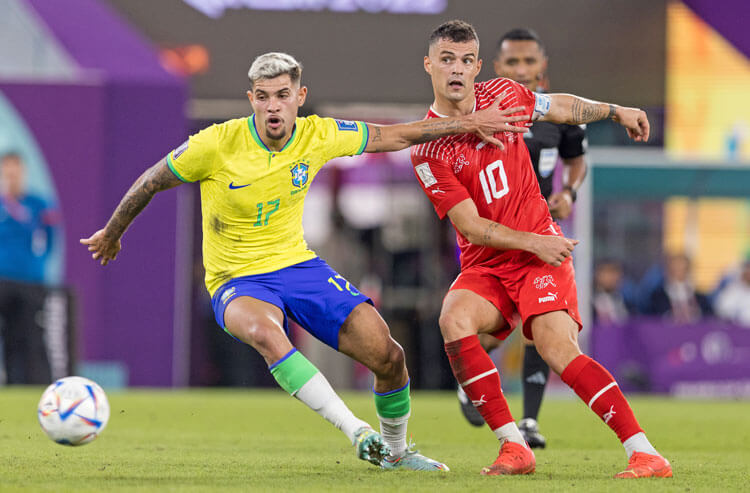 Cameroon vs Brazil World Cup Picks and Predictions: Brazil Thrill Ahead of Knockouts
Provided by