Saudi Arabia vs USA Picks and Predictions: Can Desperate Americans Get Right?

Following an embarrassing 2-0 loss to Japan, Gregg Berhalter's men have one final shot at getting right ahead of their first World Cup fixture. Back them to do just that against what should be an overmatched Saudi Arabian side.

The USMNT looks to rebound from a listless 2-0 defeat to Japan when they play Saudi Arabia in the team’s final friendly before Qatar 2022 kicks off on Nov. 20.

The match in Murcia, Spain, marks the seventh time the two nations face each other and the first since 1999. Saudi Arabia are the 53rd-ranked nation in the world while the Americans hold on to the 14th ranking.

However, the USA’s relatively high ranking flattered Gregg Berhalter’s side after being comprehensively outplayed by the Blue Samurai on Friday.

The Saudis’ match on Friday saw them play Ecuador to a 0-0 stalemate in an overtly cagey preparatory game, in which the South American side dominated proceedings.

While technically a friendly, the pressure is squarely on the Berhalter’s side to make an altogether improved account of themselves, especially as it’s the last outing before facing Wales in their opening World Cup fixture.

While injuries contributed to Friday’s loss, Berhalter will be bemused by his side’s inability to cope with Japan’s high press. The Americans were desperately negative in possession, with Weston McKennie, Tyler Adams, and Luca de la Torre overrun in midfield.

The USMNT is expected to have the youngest squad at the World Cup, but based on Friday’s performance, their palpable lack of depth will gravely concern Berhalter and his coaching staff.

It would be unfair under normal circumstances to pass judgment after one detached friendly. Still, the absence of game action before the World Cup adds immeasurable importance to each fixture.

Berhalter’s side will want to put things right before everyone heads back to their respective clubs.  Christian Pulisic’s status doesn’t help matters, as he suffered a knock in training and was forced to pull out of the Japan match.

He is currently probable for Tuesday’s match, though logic suggests he won’t risk it for a friendly if there’s any chance of a subsequent setback. The Americans are without six regulars, excluding Pulisic, putting the impetus on a score of fresh-faced players looking to secure roster positions.

Berhalter will take solace in believing things can’t get worse than Friday’s abject performance. The 2-0 loss marked the first time in 15 matches his side failed to notch a single shot on target.

Berhalter’s starting 11 against Japan included eight players who are 24 years old or younger. The only more seasoned players were center backs Aaron Long (29) and Walker Zimmerman (29), along with goalkeeper Matt Turner, 28.

The American manager put a lot of faith and expectation on such an inexperienced starting 11, especially against a wily, experienced Japan side.

However, that inexperience could be beneficial against Saudi Arabia, as younger players bounce back faster and are more adept at quickly moving on from disappointment. They’ll have to be, as Berhalter’s experienced options are exceedingly limited.

While Saudi Arabia finished top in their World Cup qualification group, they don’t have the offensive assets to break down well-organized defenses.

The Saudis’ anemic offense came to the fore in three recent contests against South American opponents. They failed to score against Colombia and Venezuela in June and didn’t muster a goal on Friday against Ecuador.

It’s also been 12 matches since Saudi Arabia scored more than a single goal.  They’ve scored just five goals in their last 12 matches in all competitions, so look for the Americans to win while keeping a clean sheet.

If you're signing up for a new sportsbook for some soccer betting, here are two of the best bonuses* available:

Saudi Arabia vs USA side analysis

Saudi Arabia finished atop Group B of the Asian Football Confederation for World Cup qualification, beating Japan by a single point and losing just once in 10 matches.

The single loss came in Japan, a 2-0 setback in February. However, Saudi Arabia split the head-to-head series with Japan, winning 1-0 at home in October 2021.

Midfielder Fahad Al-Muwallad has 70 international caps, the most of any Saudi player. Defender Yasser Al-Shahrani, midfielders Salman Al-Faraj, and Salem Al-Dawsari have 69, 68, and 65 caps, respectively.

The Saudi soccer program has improved significantly in recent years, thanks mainly to Renard’s impact since his 2019 arrival. Qatar 2022 represents their second straight World Cup appearance, the first time since 2002 and 2006.

However, the Saudis still lack top-end international pedigree and haven’t advanced past the group stage at any World Cup. Moreover, the three-time Asian Cup champions haven’t won the title since 1996.

Saudi Arabia prides itself on being difficult to break down, reflected by their last 12 matches resulting in the Under.

Only one of their previous 12 contests was decided by more than one goal, showcasing their ability to keep contests close. On the other side, three of the last four USA games resulted in the Under.

While the Americans offer a discernibly more dangerous attacking threat, they are without a handful of key regulars, which should see Tuesday’s contest result in the Under.

The temperature will be 82 degrees Fahrenheit for the evening kickoff. Winds will be light at about 6 mph, and humidity is expected to be 30%. There is currently no chance of precipitation. 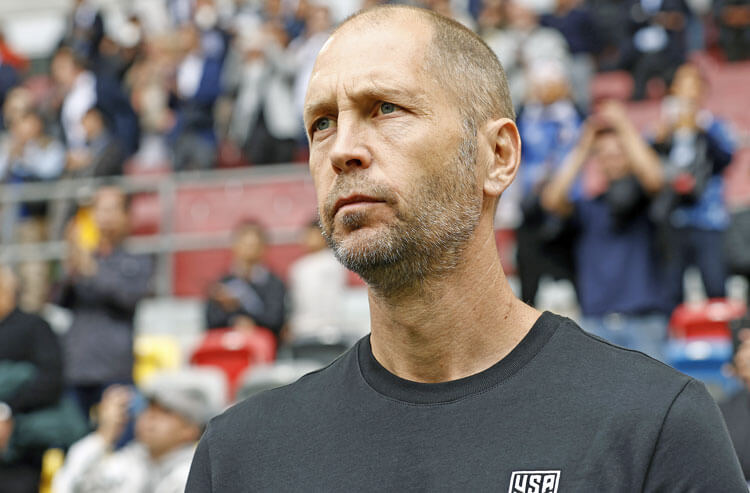 Saudi Arabia vs USA Picks and Predictions: Can Desperate Americans Get Right?
Provided by