Man City vs Tottenham Picks and Predictions: Champions Pick Up a Needed Result

Man City's title challenge took a hit with a weekend derby defeat to Man United but a home clash with Spurs offers a chance to rebound. Our EPL picks expect them to do just that in emphatic fashion.

This Thursday we have just one Premier League game, but it’s a hugely exciting clash between Manchester City and Tottenham. Man City need the win to maintain pace in the title race, while Spurs are in a thick Top-4 battle

Through 18 games, we’ve seen Pep Guardiola’s City find the back of the net 46 times, with Erling Haaland contributing nearly half (21) of those goals. There’s been lots of discussion about Haaland damaging City’s overall style of play, due to his lack of involvement besides goals. There’s probably a slight element of truth to that but it’s still early days in his City career and it can change.

For all that talk, my best bet for this game is for City to score Over 2.5 goals. They’ve averaged 2.55 goals per game in the league and have scored at least two goals in eight of their past nine games.

After losing the Manchester derby on Saturday, it’s essential that City get back to winning ways and Guardiola will have his team chomping at the bit to get stuck into Spurs on Thursday. I’m expecting them to really go for the jugular.

Spurs let Arsenal score two past them on Sunday and despite Antonio Conte’s reputation as a defensive coach, they have allowed far too many goals against them this season —27 goals — 13 more than their rivals Arsenal have allowed.

With a hungry Man City ready to make amends for derby defeat and Spurs experiencing some defensive woes, this should be a high-scoring game. City can easily put three or more goals past Tottenham.

B) Erling Haaland and Harry Kane both to record 2+ shots on target BOOSTED to +700 at Betway! Bet Now

Man City vs Tottenham side analysis

Spurs have generally had the better of this fixture in recent years. They’ve won four of the past five meetings in the Premier League, including two last season, but their recent performances make it probable that they get reacquainted with defeat here.

Man City will play their regular 4-3-3, with the only certainties being Ederson in goal, Rodri and Kevin De Bruyne in midfield, and Haaland up front. You’d expect Manuel Akanji and Nathan Ake to be at the heart of defense, given the injuries to John Stones and Ruben Dias.

Likewise, Jack Grealish probably deserves a recall to the starting lineup after his goal in the derby, especially when Phil Foden had a poor performance against their Manchester rivals. Another man deserving of a recall is Ilkay Gundogan, who should take a place alongside De Bruyne and Rodri in the middle.

Conte’s Spurs will set out in 3-4-2-1 with the fullbacks key as always in the Italian’s system. It’s essential that they do enough to get forward and support the attacks, while also coming back and limiting the danger of City’s wide players.

Dejan Kulusevski is back fit again and able to take his place alongside Son Heung-Min and behind Harry Kane, with the trio playing brilliantly together in the past.

Recent games between the two would indicate a Spurs draw or win but I think that City are just too strong now and will take advantage of a weak Tottenham team.

Tottenham have seen Over 2.5 in 55.6% of their matches on the road, finding the back of the net in four of their last five but also allowing a lot of goals, too.

When you look at recent games between the teams, you can also see that there have been Over 2.5 goals in 12 of the last 14 meetings between these teams at the Etihad in all competitions.

It’ll be dry in the day, with minor wind but with the temperature in the low 30s, it’ll be very cold. 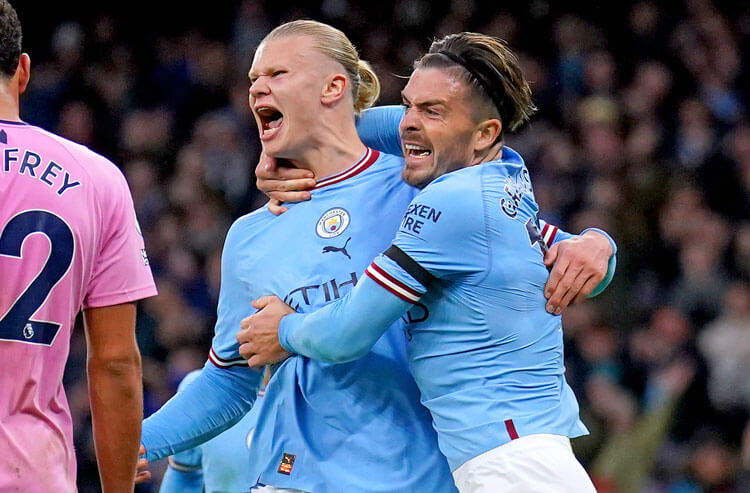 Man City vs Tottenham Picks and Predictions: Champions Pick Up a Needed Result
Provided by