Croatia has severely underperformed so far in the Euro Cup group stage and now need a win against Scotland in Glasgow. But we think they are the better side and the value resides in the 2018 World Cup runner-ups to advance to the knockout stage.

Croatia and Scotland tangle Tuesday to wrap up their Euro 2020 group stage play with plenty — or nothing — at stake.

Both teams are stuck on one point through two Group D games, and the losing team in Tuesday's encounter will be knocked out of the tournament.

The winner could advance based either on the outcome of the other Group D match between co-leaders England and the Czech Republic, or as one of the top four third-place teams in the tournament. But one thing is certain: A draw helps neither side, so soccer betting fans should look for both teams to go for broke in trying to secure the three points.

Keep reading for our tips and predictions for Croatia vs. Scotland on June 22.

As of 1 p.m. ET, two hours before the match, Croatia is a modest +130 favorite, Scotland is +175 and Draw is +275 at PointsBet USA. Despite the close line, the action is heavy to Croatia, at 86 percent of bets and 80 percent of dollars on the three-way moneyline. The Scots are taking 11 percent of bets/18 percent of money, and Draw is at 3 percent of bets/2 percent of cash. The total of 2.5 (Over -125) has tickets and money both running in the 2/1 range on the Over.

The weather at Hampden Park looks terrific ahead of Tuesday's match, with partly cloudy skies and temperatures in the low-60s. A 12 mph wind is expected at kickoff.

These teams might be level on points, but it's clear that Scotland have the momentum entering their Group D finale. They have never lost to Croatia in five all-time meetings (three wins, two draws) and should be amped at the prospect of playing for a spot in the knockout round on their home soil, where they have just one loss in six matches since September 2020.

There's also the matter of an impressive scoreless draw with England, a result that undoubtedly has Scotland thinking upset here (however small it would be based on the current odds). The Czechs have looked completely disjointed on offense through two games, and facing a Scotland team in enemy territory that held the Three Lions off the scoresheet will be a daunting task.

The Croatian contingent has gone four games without a victory across all events, and have just one goal in their previous four international road games (all losses). But the loss of Billy Gilmour to a positive COVID-19 test looms large — as does the fact that, for as well as they have played defensively, Scotland have yet to score a goal at the European Championship.

Several players remain from the Croatian side that reached the World Cup final in 2018 — and while Zlatko Dalic's side has looked mostly dreadful so far, there's still time to get right. That time is Tuesday — and the Croatians should follow through.

There will likely be a flood of money coming in on the Under for this game, given that both teams are a combined 4-0 to the U2.5 so far in the tournament. Add in the fact that each of their previous six meetings have come in below the number, and you have even more of a reason to consider the Under.

But we're not doing that.

The Scots know they can't afford to be blanked for a third straight time and the confidence they've gained from their draw with the English, combined with playing on friendly soil, should reap benefits at the offensive end. Conversely, Croatia are the more talented offensive side and also know that they won't secure the three points without being more aggressive on the attack.

These teams have shown a conservative side to open Euro 2020... but you can throw those earlier results out the window. This game should feature plenty of scoring chances on both sides, making the O2.5 a strong option. 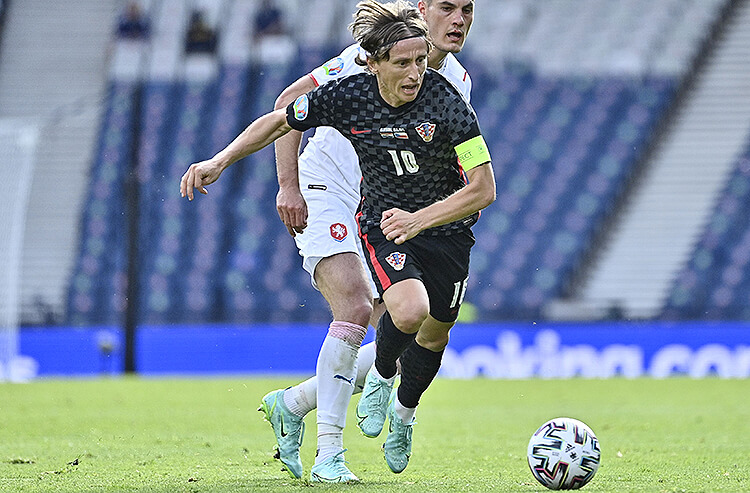 Croatia vs Scotland Euro 2020 Tips and Predictions: Croatia Aims To Topple Scotland In Glasgow
Provided by