A new era for Manchester United... looked a lot like the old era, as they shamefully lost on the opening weekend. Headed south for a meeting with Brentford this weekend, our EPL betting picks expect the Red Devils to avoid dropping more points.

Going into this season there was a lot of optimism around Man United but that’s crumbled after one humiliating loss to Brighton. Brentford, meanwhile, look to build upon their draw against Leicester.

Can Brentford take points off Manchester United and condemn them to more misery? Don’t miss our Brentford vs. Man Utd picks and predictions, with kickoff on August 13.

B) Cristiano Ronaldo to score and Man United to win BOOSTED to +225 (was +200) at PointsBet! Claim Now

It’ll be a very hot day by British standards on Saturday, with temperatures over 90 degrees at the time of kickoff.

Man United’s failures in the transfer market are one thing, but the performance in a 2-0 loss to Brighton was a real cause for concern and looked far too much like what we saw last season, not a new beginning.

The decision of Erik ten Hag to play Christian Eriksen as a false nine just didn’t work, but it looks likely that Anthony Martial should be fit for Saturday and will return to the team. During the preseason, we saw that a front three of Martial, with Jadon Sancho and Marcus Rashford out wide, could work.

In those friendlies, they looked dynamic and menacing, something that wasn’t there when Eriksen played the nine role, and neither was it there when the immobile Cristiano Ronaldo came off the bench in the second half.

For the team to play as ten Hag wishes, they’ll need to play with three mobile and direct forwards, something I expect them to revert to once the personnel is fit.

It was tough to know what to expect from Brentford this season. They started very slowly against Leicester last weekend, but they worked hard, scoring two goals, and got themselves a hard-earned draw.

In Ivan Toney, they have a striker who knows where the goal is, and he’ll be a handful for Man United, as will Josh Dasilva. Dasilva spent last season out injured but was highly thought of before that. He started as a sub last weekend but really performed when he came on, scoring the goal that leveled the tie.

We saw enough from Man United in the preseason to believe that the performance against Brighton might be a one-off. I’m prepared to give them the benefit of the doubt here, and at +100, they’re probably worth backing here.

We’re only two weeks into the season, so we can’t make any real judgments based on form, but we’ll be taking Over 2.5 here. We’ve only got a small sample size, but this wager makes the most sense.

Brentford scored two goals last week and gave up two, which gives us hope that Man United’s stuttering attack should be able to get into gear against this team. United’s pace should be able to cause fullbacks Rico Henry and Aaron Hickey problems, and we should see some United goals.

United’s backline was poor against Brighton, and if Brentford have taken any lessons from Graham Potter’s masterclass, then there’s a chance they get on the scoresheet at least once.

Take the Over here and don’t look back.

Anthony Martial has had a difficult time since joining Manchester United. When he signed from Monaco, there were questions over the transfer fee, but he immediately became a fan favorite with some crucial goals, including scoring against rivals Liverpool.

Since then, he’s fallen in and out of favor under various managers and spent time at Sevilla on loan last season. He probably isn’t in Erik ten Hag’s long-term plans, but he offers more mobility than Ronaldo, and you’d think his ability to come in off the left flank could appeal to the new manager.

Martial has the attributes to succeed under Ten Hag, and his return to the team should be a boost for the team. He scored three goals in five games during the preseason, and if he plays through the middle here, he should have chances to get his season off to a good start. 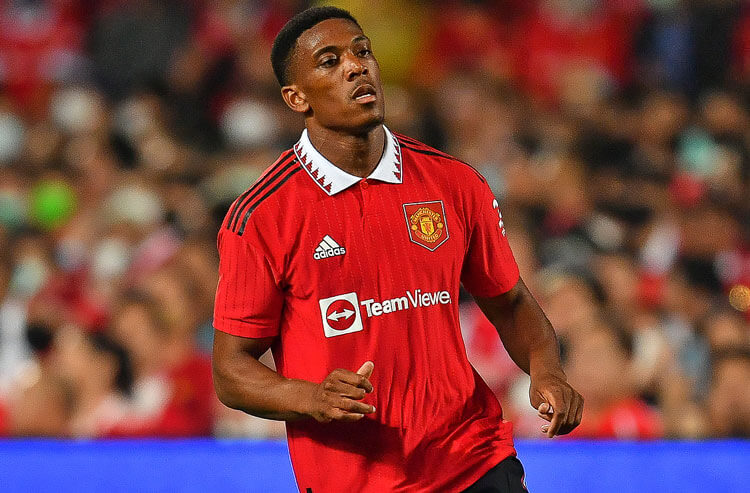