Brentford vs Manchester City Picks and Predictions: Could We See An Upset Under the Lights?

In a much-anticipated matchup for Brentford and its fans, many expect Manchester City to breeze to a road victory, but there may be an opportunity for the home side to steal a point from the league leaders — which our EPL betting preview breaks down.

Not many teams have been able to stop Man City’s attack this year but can Brentford continue to surprise? Don’t miss our Brentford vs. Man City tips and predictions.

Temperatures will be around 55 degrees when the game kicks off at 8:15 p.m. local time. The wind won’t be that strong and we shouldn’t see rain, all conditions which will suit Pep Guardiola’s Manchester City.

Brentford welcomes Manchester City to the Brentford Community Stadium in a game that their supporters have had pencilled in their calendars since the schedule was announced. The Premier League often pits big against small but there really couldn’t be more difference between Brentford and Man City.

Brentford, a small community-driven club in West London has been a steady, if not unspectacular, club in the lower reaches of the soccer pyramid in England. Man City, at least the current 2021 version, is a monster, an incredibly refined megaclub owned by a state, dripping with petro-dollars and coached by the best manager in the game.

While Man City is by a state, the UAE, Brentford are owned by Matthew Benham. You may not have heard of Matthew Benham but he’s a professional gambler and a man who made his millions by utilizing smart analytics. He’s taken that number-crunching approach to owning a soccer club and has taken a ‘Moneyball’ approach, scouting the lower leagues in England and smaller leagues such as those in Scandinavia to find players at value prices.

Man City is one team that doesn’t need to check the price tag when they do their shopping. With their endless bankroll, Pep Guardiola has not only built a fantastic starting XI but has also got incredible depth in his squad. While other clubs have suffered from COVID-19 and injuries over this winter period, it’s noticeable that Man City hasn’t really had that many problems.

We’re likely to see Man City near their very best in terms of fitness on Wednesday. Guardiola will be missing John Stones and potentially Kyle Walker from his best team but that won’t be an issue. We’ll likely see Nathan Ake take the place of Stones and the magnificent Joao Cancelo to move to right-back in place of Walker with Oleksandr Zinchenko moving into his left-back slot.

Brentford will be more marginally more impacted by injuries though, with Kristoffer Ajer and David Raya the players who’ll be missing out for the Bees, although it’s possible they could also be without Rico Henry and Bryan Mbeumo who would be big losses.

So what’s going to happen in the game? With Man City at -700 favorites it’s very clear that the sportsbooks believe it’ll be an easy win on the road but it’s very hard to justify betting anything at those odds. Odds of -700 imply an 87.5% chance of City winning which is probably just about fair when you look at how dominant they’ve been all year.

I don’t think it would be right for me to suggest betting on a selection at -700, so despite thinking it’s the more likely option I’d actually recommend backing the Draw at +700. Given the sheer volume of games that we’ve had recently, there is a chance that these players could be tired and freak results could occur. Not only that but we’ve seen what sort of atmosphere a packed Brentford Community Stadium can create and this will have the feel of a very special game, against the league leaders, under the floodlights.

The books heavily favor the Over here and it’s easy to see why. The Over has landed in 55.6% of Man City’s games on the road this year and has landed in half of Brentford’s home games.

It’s not often that a team of this quality arrives in West London to face Brentford and the sheer ability of the players on display in this game really boosts the chances of the Over landing. This Man City team is perhaps not as free-scoring as some of Guardiola’s previous City teams, they’re built on possession and a strong defense, but despite that, they’ve still scored 50 goals in just 19 games. That’s tied with Liverpool and more than anybody else in the Premier League.

The stats point us towards the Over. The incredible array of players at Man City’s disposal points us towards Man City. Recent results, including Man City winning 6-3 last time out also point us in the direction of the Over. Don’t overthink it, just back Over 2.5 goals.

David Coote is the referee in charge of Wednesday’s game between Brentford and Man City and he’s a magnet for bookings. He’s taken charge of 10 games in the Premier League season and given out 52 yellow cards, averaging at 5.2 per game, in addition to two red cards as well.

With Brentford likely to be playing without possession for the majority of the game, we need to look at their players most likely to get booked. We’re also better to look for players who’ll have to take on defensive responsibility against either City’s strong midfield or their wide players.

One player who leaps out is Sergi Canos. The Spaniard has five yellow cards in 16 Premier League starts this year and will likely have to deal with City’s fullbacks as well as tracking back and dealing with City’s wide forwards too, potentially Raheem Sterling, Phil Foden or Riyad Mahrez. 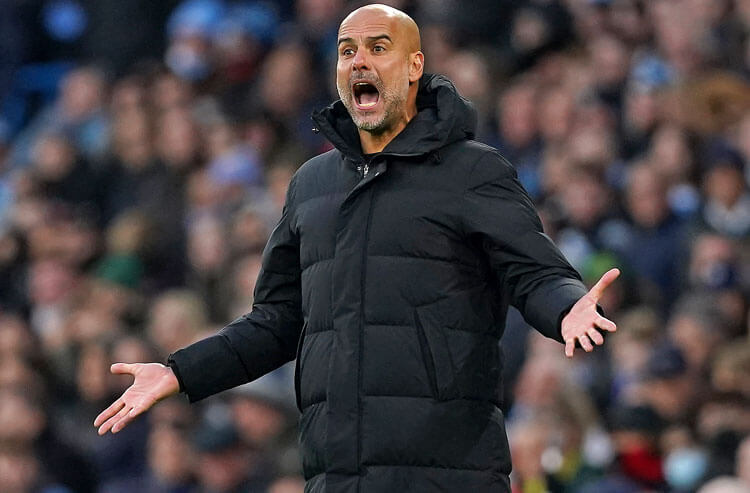 Brentford vs Manchester City Picks and Predictions: Could We See An Upset Under the Lights?
Provided by