Donald Trump is a slight underdog to win the 2020 U.S. Presidential Election but one political bettor says the incumbent is still the frontrunner using his models and strategy heading into November's election.

If you thought election betting was huge four years ago – and it was, without question – then brace yourself for the final month of the 2020 U.S. presidential election. To put it in the words of Bachman-Turner Overdrive, “You ain’t seen nothing yet.”

U.S. presidential election odds are all the rage in the United Kingdom, where punters – the British term for bettors – love betting on American politics. In 2016, Ladbrokes had record election handle (total amount of money bet), and yet this year’s battle between Republican incumbent Donald Trump and Democratic challenger Joe Biden is on pace to obliterate that mark.

“We think we are on course for around double the turnover in 2016, and this will easily be the biggest political betting event ever,” Ladbrokes political trader Matthew Shaddick tells Covers.

Since political betting is still illegal in U.S. jurisdictions, offshore sportsbooks get flooded with cash from American customers. This year is no different, with expectations right in line with those of UK operators.

“Political betting is so big now,” said a spokesperson for a well-known offshore sportsbook. “It was very big in 2016, but we will definitely surpass our 2016 numbers with ease. It will be record handle for politics.”

That would certainly be the case in the U.S. too, if legislators and regulators would allow betting on politics. Jay Kornegay, who oversees operations of The SuperBook as the vice president of race and sports for Westgate, said earlier this year that presidential election betting would generate monster handle.

“Just talking to others who have booked the election, they’ve been saying for years that the presidential election handle would dwarf the Super Bowl,” Kornegay said. “That’s been widely discussed, in the United Kingdom and at offshores. And when I say dwarfs, I’ve heard 10 to 15 times the Super Bowl numbers. More people have political opinions than sports opinions. You’re reaching a bigger demographic.”

For now, though, American bettors who want to get involved will continue either trekking to Europe or looking to the offshore market.

Who are people betting: Trump or Biden?

For the past six weeks or so, Biden was sitting around a -130 favorite at Ladbrokes, while Trump hovered around even (+100) money. However, the favorite isn’t generating a whole lot of enthusiasm in the UK.

“He’s not attracting much support yet. Perhaps that changes after the first debate, if he comes through OK,” Shaddick said prior to Tuesday night’s showdown in Cleveland. Ladbrokes indeed felt Biden came through OK, as current odds are Biden -160/Trump +125.

However, Trump is having no trouble at all creating betting buzz across the pond, in slight contrast to his odds and certainly in contrast to political polls.

“The odds, like the polls, have actually been very stable over the last few months,” Shaddick said. “The odds are giving Trump a much better chance than the polls would imply. Last week, 83 percent of stakes (money) at Ladbrokes were for Trump, and that is not unusual.

“As far as the betting goes, it's all Trump. His supporters seem to be able to ignore or dismiss all the polling evidence.”

The aforementioned offshore operator had Biden’s high point at -180 earlier in the summer. By the time the Republican National Convention ended, it was down to a pick ‘em, then briefly moved to Trump -120. The odds shifted to Biden -130/Trump +110 before the first debate, and the book moved to Biden -150/Trump +130 post-debate.

“The action is very even and has been for weeks,” the offshore spokesperson said. “We need Trump, but not big at this point.”

That need got magnified a bit after the huge news late Thursday night that the president and wife Melania Trump tested positive for COVID-19.

"We closed the market when bets started coming in on Mike Pence at 100/1," the offshore spokesperson said Friday morning, alluding to late-Thursday wagering in the wake of the breaking news. "We just reopened. Pence is down to 20/1, Biden is -190 and Trump +160. This morning, there's still some Biden and Pence action."

Across the pond at Ladbrokes, Shaddick said betting was suspended "until we get a bit more reassurance about Trump's health status."

Robert Barnes is a high-profile attorney and also a longtime political bettor, dating back to 1988, before he was even of legal age to wager. Barnes won well into six figures betting on the 2016 U.S. presidential election at sportsbooks in the United Kingdom, correctly predicting that Trump – at odds of +400 or greater – would upset Hillary Clinton.

Odds this time around aren’t projecting a Biden cakewalk, though Barnes believes the numbers still aren’t quite in line. But as 2020 has shown and as Barnes admits, we’re also at an unparalleled point in history.

“This is the craziest presidential election ever, and will be the toughest for even the smartest handicapper to forecast, because we have unprecedented events,” Barnes said. “First, an election-year lockdown never before witnessed, with broad effects across the economy and society. Second, a potential change-the-court-forever Supreme Court pick to be voted on a week before Election Day. And third, the always unique factor of Donald Trump, but now as an incumbent.

“Without those three factors, by the historical metrics I’ve used to win every presidential bet I ever made, since I was a kid, Trump should be a 90 percent favorite.”

Instead, Trump is short plus money, while Biden is a relatively modest favorite.

Barnes said his presidential election betting model has one key component: if the incumbent enjoys a united party, as measured by significant early primary competition, then the incumbent has always won. The reason that’s the case, Barnes said, is the opposition party always picks as a candidate the person who seems most like a politician, rather than a president.

Case in point: Joe Biden, who’s spent nearly five decades in D.C., between Congress and in the White House as vice president. He’s a politician, through and through.

But that component is up against the aforementioned unprecedented events of these past several months, especially the late-breaking Supreme Court situation.

“I believe the Amy Coney Barrett nomination poses unusual risks and effect on the election,” Barnes said. “Historical metrics say Trump wins; pandemic lockdowns and polls say Biden. Right now, I would say it's 50/50, due to the Supreme Court haymaker to my election odds.”

"It's like playing poker when, in mid-game, the dealer tells you they are adding joker cards as wildcards, and three get dealt in the same hand," Barnes said. However, certainly contrary to popular thought on Friday morning, Barnes adjusted from 50/50 to 60 percent for the incumbent Trump.

As Barnes noted, with the economy rolling early this year, he gave Trump a 90 percent chance of winning. Even with the COVID-19 pandemic and subsequent lockdowns, he still pegged the incumbent at 75 percent.

“Lockdowns created the initial risk, or this wouldn’t even be close,” Barnes said, noting that even with the pandemic, he was ready to fire on Trump and the GOP to keep the Senate, and put some small bets on a couple of other markets, such as the GOP to take back the House at +600. “But now, I want to wait to see the impact of the Supreme Court choice, which feels like a high-risk gamble by casino man Trump.

“Historical metrics favor Trump, as Trump won more united support and enthused turnout in the primaries than any GOP incumbent in history, while the Democrats nominated the weakest nominee since George McGovern (1972). Enthusiasm heavily tilts toward Trump, working class support is at record levels for a Republican candidate, and the populist side of the political aisle wins most of the time in America. But all this might change if Trump's choice for the Supreme Court becomes his own ‘October surprise.’”

TRUMP VS BIDEN: WHO YOU GOT?

Want to share your thoughts and predictions for the 2020 U.S. presidential election?

Join the discussion in our Politics posting forum

All that said, and even with Trump only a 50/50 proposition in Barrett’s long-successful model – he’s hit the mark in multiple U.S. elections, along with Brexit among recent winning wagers – Barrett will be in position to wager ahead of Nov. 3, grabbing a flight from his Las Vegas home.

“I still lean Trump, but won't pull the trigger on a bet until I see how the Barrett nomination shakes out in the court of public opinion. I still plan to be in London a few days before Election Day,” he said. “Past is prologue. I have never lost a presidential election bet, including bets on UK and French elections. I look forward to 2020 continuing that trend and tradition, but it will be the hardest election to forecast that I have ever been a part of.”

Where can I bet on U.S. Presidential Election odds? 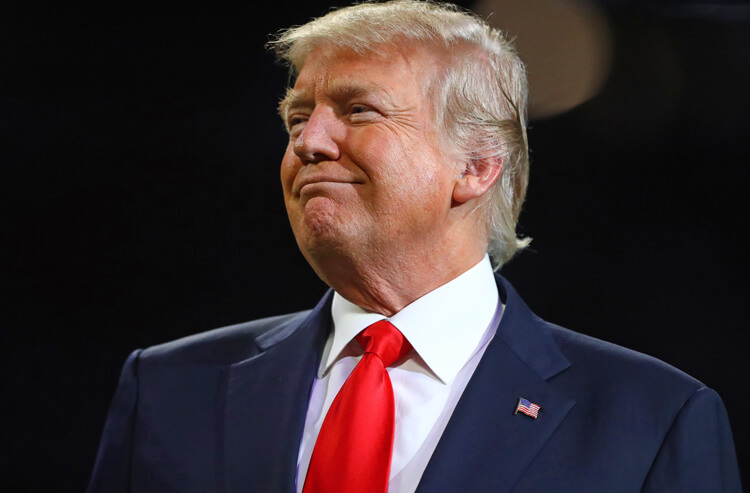